Home Ford Ford Fiesta facelift coming to us next year

Ford revealed the much discussed 2013 edition of the Fiesta sedan at the Sao Paulo International Motor Show. Now, it is being said that the Fiesta sedan facelift will be launched in India next year. There are good chances that the car will be on display at the 2014 New Delhi Auto Expo in February next year.

One of the most talked about bit about the updated Fiesta sedan is its new engine option. With the advent of the facelift, the sedan got the much publicized 1.0-liter EcoBoost motor for some of the markets it is sold in. The turbocharged three-cylinder engine pumps out a very healthy 123bhp of peak power and the ‘number-hungry’ enthusiasts will be impressed by the fact that the EcoBoost has a better Power/Litre figure than that of the Lamborghini Aventador’s engine (123 vs 108 HP per liter) !! The new engine also has class leading fuel efficiency figure and lower CO2 emissions.

There are fair chances of us getting the EcoBoost engine option, especially because we already have the EcoSport EcoBoost on sale here and the engine has been liked by both auto hacks and car buyers. 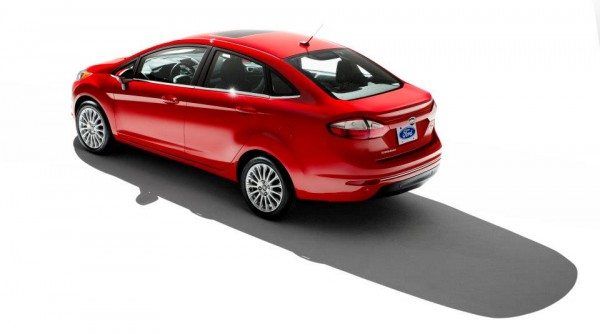 At the rear, the 2013 Ford Fiesta sedan gets a new bumper and altered tail lamps. The rear is also seen sporting reshaped registration plate housing on the boot lid. If pictures are anything to go by, the latest set of changes makes the rear end look longer and hence, seem to have done a world of good to the car’s rear end styling. Ford says that the updated car is much more ‘sporty’ and ‘robust’ than the outgoing model.

On the inside, the car gets a new centre console and re-position gear shifter. The interior is now made up with better materials and is being claimed to be more ergonomic.

Other mechanical changes include a tuned suspension and an improved chassis.