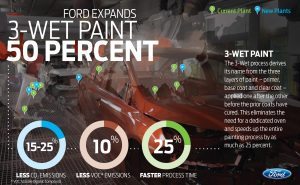 American auto giant Ford Motor Company is expanding its industry leading 3-Wet paint capacity by as much as 50 percent this year. This means that the automaker will be seen installing the environmentally friendly paint process to four more plants on three continents. The actions will reduce CO2 emissions by an estimated 30 percent at those facilities.

Ford, which was the first car manufacturer to implement the 3-Wet high solids solvent borne technology in 2007, currently has eight plants spread across North America, Asia Pacific and Europe equipped for using the process to paint vehicles. That will expand to 12 plants in 2013, and then to additional facilities worldwide over the next four years.

The 3-Wet process has been named on the basis of three layers of paint that are applied one after the other before the prior coats have been cured. The process eliminates stand-alone primer application and a dedicated oven required in the conventional process that was used before.  Advanced chemical composition of 3-Wet paint materials allows for the three layers of paint — primer, base coat, and clear coat – to be applied while each layer is still wet without baking in between.

The advantage of using the 3-Wet technology is that it enables Ford to maintain top quality characteristics that customers demand, including long-term durability and chip and scratch resistance.

Enabling the technology is a combination of process and product developed by Ford and its suppliers that create the 3-Wet high-solids, solvent-borne paint formulation. The result is a superior system that saves 20-25 percent of process time. Ford benefits by saving electricity from the blowers, which circulate massive volumes of air through paint booths and natural gas from heating the air and paint cure ovens.  This results in significant reductions of CO2 emissions, as well as reductions in volatile organic compounds compared to current medium-solid and solvent-borne paints.

Locations where Ford is installing the 3-Wet process in 2013 are:

Locations that currently have 3-Wet capability are:

Ford India’s Chennai based manufacturing plant is the first Ford car plant in the world to use new Three-Wet High-Solids paint technology. Ford India is also the only car manufacturer in the entire country to use this environment friendly technology. Automated robots apply all three coats – primer, base coat and clear coat – one on top of another before oven curing.

The plant also does heat recovery by utilizing exhaust heat air to heat fresh air through Heat exchanger in Topcoat oven and E coat ovens. Propane gas has been introduced as a fuel in our ovens instead of diesel, making for an environment-friendly paint process.

The energy saved in the paint shop – 27.6 million kWh/annum – is enough to power almost 12,000 households in Chennai for a year, or to light up the entire Chennai street lights in night for almost 4 months.