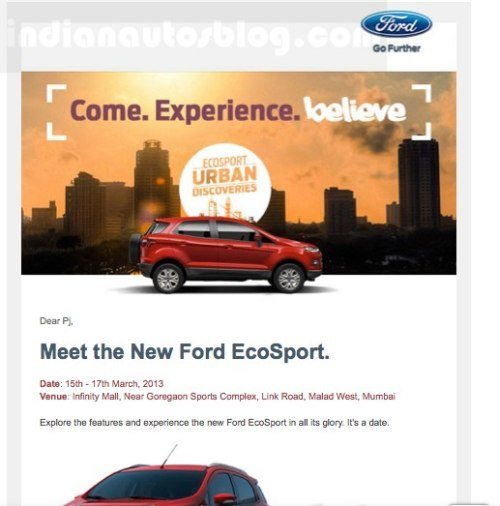 The Ford EcoSport is inching closer to its India launch with every passing day. Yesterday, we reported about the new TVC for EcoSportDiscoveries from Ford India. Now, it has emerged that Ford is close to showcasing the much awaited EcoSport compact SUV in Mumbai. The EcoSport will be on display at the Infinity Mall, Mumbai from 15 to 17 March.

Ford feels that the target customers for the EcoSport would spend free time on weekends at shopping complexes instead of visiting Ford India dealerships.

The entire country is looking forward to the launch of the much hyped compact Crossover from Ford and there are rumours abounding that the upcoming compact SUV from Ford India will be introduced into our car market at a very attractive price. The much publicized compact SUV from Ford is less than four metres in length and every engine variant of the EcoSport have a displacement of less than 1.5 litres. This will see the Compact crossover qualifying as a small car in India and would hence, benefit from lesser excise duty. The Ford EcoSport won’t have to suffer from the recent increase in the excise duty for SUVs on sale in India. The Ford EcoSport will enjoy from a lower excise duty of 12%, which is the same percentage of excise duty as on most of the hatchbacks on sale here.

The India spec Ford EcoSport compact SUV is being expected to come in as many as three engine variants- 1.5 litres normally aspirated petrol, 1.5 litres turbo diesel and the 1.0 litre turbo petrol EcoBoost motor that has been in limelight since a lot of time.