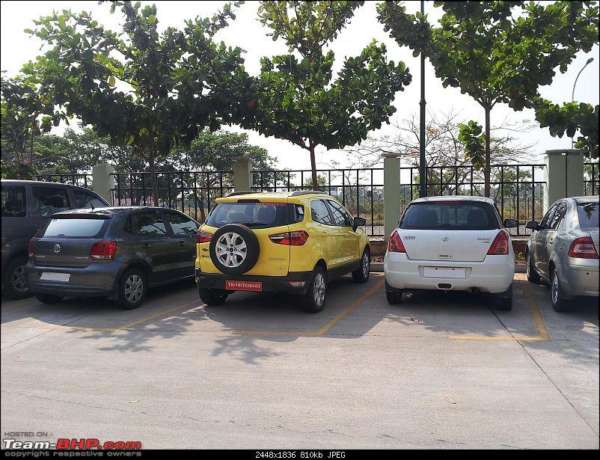 It is a well known fact that Ford India is readying itself to launch the much hyped EcoSport compact SUV in Indian car market. The EcoSport has been spotted testing on Indian roads on numerous occasions and Ford continues to test the upcoming compact SUV on public roads even after it has launched the promotional campaign for the much awaited car.

While everyone has got a good idea of what the car would look like on our roads, the latest batch of spy pics gives us a good view of how the sub 4 metre compact SUV would compare to the sub 4 metre hatchbacks. 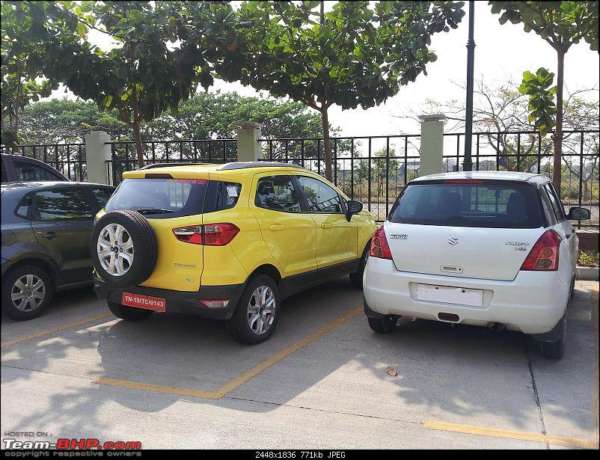 As can be seen in the pics here, the upcoming compact SUV seems to have got much more road presence than the VW Polo and the Maruti Swift hatchbacks that can be seen parked beside it.

Full points to the designers at Ford for doing a great job with endowing the new compact SUV with an imposing stance. We feel that while the car isn’t as big as say a Tata Safari, it would look every bit a SUV should and would command a good road presence.

This is definitely good news for the prospective buyers of the EcoSport. The car is taking its sweet time coming to us. The car has already been launched in several countries and has been making life tougher for Renault Duster and the likes.

We really can’t wait to spend some quality time testing the EcoSport.