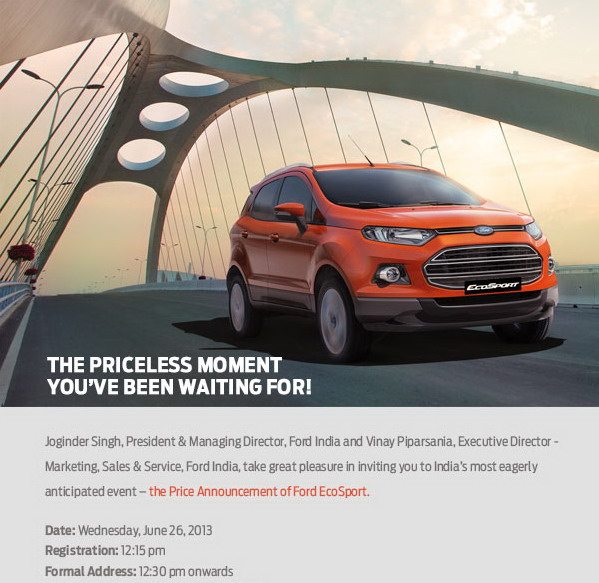 It is a well known fact that the Indian subsidiary of Ford plans to soon launch the EcoSport in fast developing Indian car market and we have been reporting in detail about the much publicized car. We also reported in fair detail when it emerged that Ford India dealerships across the country have already started receiving the first batch of cars and now, official word is out that the EcoSport will be launched in India on June 26.

Ford India hasn’t yet unveiled the price list and has today said that the prices will be announced only on June 26. It is being said that the EcoSport will be launched at a starting price of INR 6.5 lakhs. If true, Ford India definitely has a winner in its hands. Heavy localization levels should really help the car maker with pricing the car ultra competitively.

The Ford EcoSport will come to us in as many as three engine variants.

The base engine variant will sport the same 1.5 litre normally aspirated petrol engine that powers the Fiesta.

The third engine variant, and the one that will be seen bringing the volumes, will be powered by the Fiesta’s 1.5 litre turbocharged diesel motor.

The India spec Ford Ecosport will go on sale in four trim levels- Ambiente, Trend, Titanium and Titanium Plus.

Unlike what was being said earlier, the Titanium variant will be available with all the three engine variants- with the 1.5 litre Turbo diesel, with the 1 Liter EcoBoost turbocharged petrol and 1.5 Liter petrol engine. The Titanium trim level brings along 6 speed PowerShift dual clutch automatic transmission for the 1.5 liter Ti-VCT petrol.

The Ford EcoSport will be launched in as many as 7 color options.

The Titanium variant will get Smart Keyless entry and Push Button Start. The SYNC emergency system will come in the top two variants. The two top of the line variants will also get a CD/MP3 player and a 3.5-inch multifunction display.