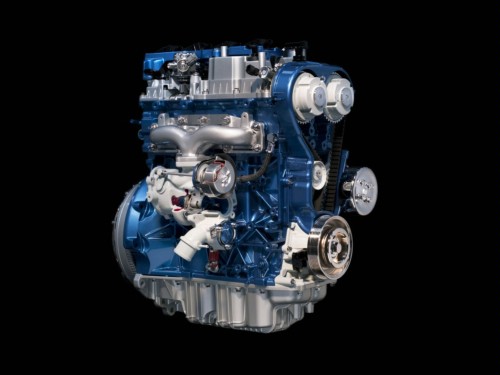 Ford 4-cylinder EcoBoost Engine, the 1.0-liter 3-cylinder version will be revealed at Frankfurt

Ford has internationally announced a new one litre, three-cylinder turbo charged petrol engine with three cylinders. Ford will make this engine keeping the entire global scene in mind so that the engine can be plonked in small Ford cars all over the world. Although it’s not official, but some hints about relative comparisons of percentage increase in higher capacity EcoBoost engine suggests a peak power of 120 PS and peak torque of 152 Nm. Ford claims that the engine would produce peak power rivaling the 1.6-liter engine propelling the Fiesta, with improved fuel efficiency. No prizes for guessing which car the engine would suit the most. The Figo would become a rocket of sorts with that engine, without crossing the 1.2-liter cap required to avail the excise duty cut.

Ford promises that the engine will be a performer on par or better than higher capacity four cylinder NA versions and will also improve fuel efficiency. The engine will first be revealed at the upcoming Frankfurt Motor Show.

The one litre engine will have these features:-

Apart from the engine, Ford has also announced a new eight-speed transmission which will be developed totally in-house by the company. According to Ford, the new transmission will be extremely smooth and very efficient.

With petrol prices rising in India and companies like Chevrolet coming up with a one litre diesel engine, Ford should plonk their new one litre engine in their best-selling Figo whenever it is ready or introduce a new, sportier car  (the Start Concept looks lip smacking) on a smaller platform as there are still a considerable amount of people who prefer Petrol over diesel.