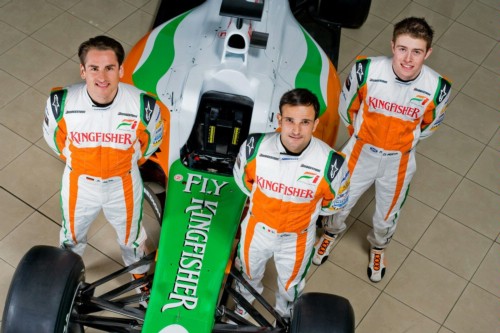 Force India has announced its team for the 2011 Formula One World Championship season. The team will continue with Adrian Sutil for the fifth year in succession. He will be joined by debutant Paul di Resta. Nico Hülkenberg will doing the duty of a part time and test driver for the team.

Sutil secured 47 points last year. This was his most successful season in F1, and he helped Force India finish seventh in the constructor’s championship. Force India claims that they no longer are laggard, and will emerge as a very strong mid-field team this year.

On the other hand Paul di Rista will make his debut after a year of serving Force India as a reserve and test driver in 2010. The Scot is only 24 years of age, but has very good experience.

Team’s reserve driver, Nico Hülkenberg is a promising driver too. Last year he managed a pole position for the team in Brazil. We are sure the F1 world will see him racing, more often than testing very soon.