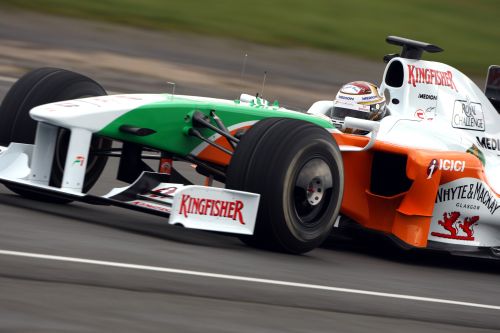 Indian F1 team Force India’s driver Adrian Sutil believes that the necessity of driving behind the safety car gave the team strategy a bad hit at the 2011 Formula 1 Japanese Grand Prix held at Suzuka. While the Japanese Suzuka Circuit saw Red Bull driver Sebastian Vettel secure a third place at podium and thereby win the world Championship title for the second time in a row, it was McLaren’s Jenson Button who stood at the top of the podium at the Japanese Grand Prix.

Force India team drivers, Adrian Sutil and Paul Di Resta finished the race at eleventh and twelfth places respectively and what is more interesting is the fact that incidentally, they had qualified for the 2011 Formula 1 Japanese Grand Prix in the same positions! Force India is looking forward to beat Renault for the fifth spot on the Constructor’s Championship. The Force India cars did not finish in the top ten and that translates into having to miss out on the crucial points. The hopes of catching up with team Renault in 5th spot on the Constructor’s Championship currently get even  tougher considering just four flyaway races remain after Suzuka GP in the 2011 F1 season.

Force India driver Paul Di Resta had an amazing start and improved 4 places in no time during the initial laps but he says their team strategy went kaput because the safety car had to be deployed out. After the Japanese Grand Prix, Force India was at 6th place with 48 points while Renault was in fifth place with 72 points. Also, team Sauber has been playing catching up with Force India at an alarming rate. The next race at the Korean on October 16th will be followed by the inaugural Airtel Indian Grand Prix and these two will, to a large extent, define the future of the three teams.

Paul di Resta had this to comment. “I settled into a good rhythm but the safety car spoilt our strategy because that was our fastest part of the race and it was important to try and pull a gap. It helped the cars making two stops because they caught us in the final laps and it was very hard to defend.Going into the final four races we know it’s going to be a close battle with the teams around us. Sauber seemed to be quite competitive here and Renault look to be back on form, but we will try and fight back in Korea.”

All hopes on the two racers to make us Indians proud by  making Force India attain a more respectable position in the championship . As they say, Fingers Crossed.