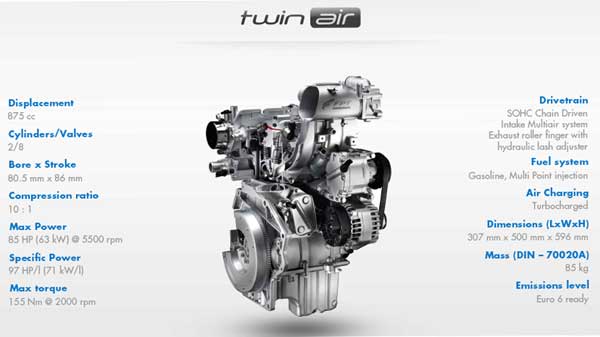 The 2011 Engine of the Year Awards have been announced. Fiat, who have always been known for their innovation in small engines and cars, have won the prestigious award for the year with their 875cc twin-air turbocharged engine. The diminutive engine complies best with today’s green and efficient requirements, with minimal greenhouse emissions and power output of an impressive 85PS. And just to make your eyes pop out in surprise, it’s a twin cylinder engine! The engine is employed in the Fiat 500.

Joining the Italian carmaker in the award haul is its compatriot supercar maker and Group company Ferrari, which together with Fiat has swept 6 out of 12 awards this year.
The 2011 International Engine of the Year Awards were announced at Engine Expo in Stuttgart, Germany. The global jury consisted of some of the world’s most respected and popular motoring journalists.

Indeed, the TwinAir engine not only managed to scoop the overall International Engine of the Year title, but it was also victorious in the Best New Engine, Best Sub 1-litre, and Best Green Engine categories, even beating zero-emission pure electric vehicle engines from Nissan and Mitsubishi in the latter category. Ferrari F459 Italia’s 570bhp, 4.5-litre V8 engine won ‘Best Performance Engine’ and ‘Above 4-litre’ category trophies.

Here’s the list of the rest of the winners