The good folks at TeamFiat forums have come up with a new set of spy pics of the India bound Fiat Linea facelift. The latest batch of spy pics clearly shows the updated interiors of the upcoming car. 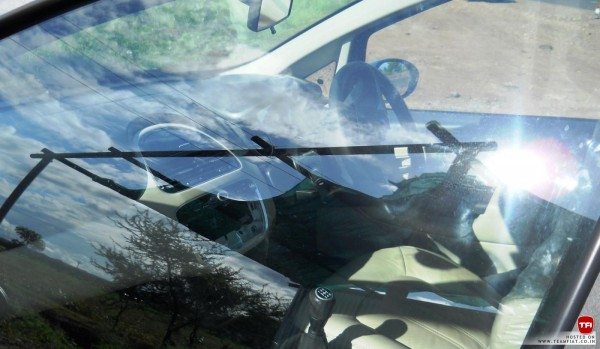 As can be seen in the above image, the dashboard of Linea facelift gets new aircon vents and an updated instrument console. The chief highlight of the new dashboard is its redesigned centre stack, which gets a new interface for the audio system. The car also gets an upholstery change, which includes more premium seat fabric.

Talking about the car’s exteriors, the Fiat Linea facelift sports a a revised front fascia which consists of a new bumper, grille and a lip spoiler. Also, the car gets a new rear bumper and revised taillights. With the advent of the Linea facelift, designers at Fiat have done away with the Audi-ish ‘Bulgarian beard’ and the C segment sedan now gets a new front grille that reminds us of the one on the last gen Hyundai Accent/Verna.

The Linea facelift is likely to come to us with a 1.6 litres Multijet diesel engine. The other engine option on offer would be the 1.4 litres turbocharged petrol motor that powers the Linea T-JET.

With the advent of the facelift and Fiat India taking steps to improve its sales & after sales network, the Linea facelift could have a better fate in our car market than the pre-facelift model.