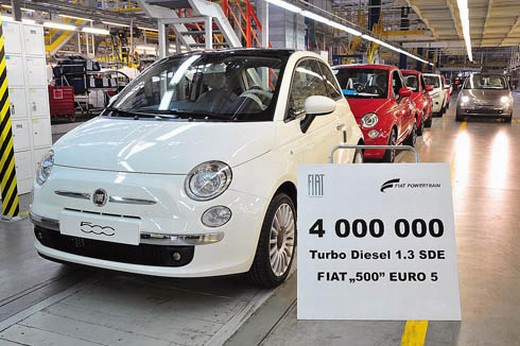 Fiat has officially sold 4 million units of their very favourite 1.3 litre diesel Multijet engines globally. The 4 million engine unit was made for the Fiat 500 which was sold to a French man. Fiat introduced the 1.3 Multijet first time in 2003 but the 1.3 Multijet was made from the Common rail engine which was invented by Fiat in 1997, from then till now the engine has gone through changes and improvements offering power figures of 75bhp with fixed geometry turbo to 90bhp with variable geometry turbo. Since 2008 Fiat started manufacturing the 1.3 Multijet 16 valve at their factory in Ranjangaon.

It’s quite a surprise that most of the diesel Indian hatchbacks and some sedans work on the same 1.3 lit Multijet made by Fiat. From Maruti camp we have the Swift, Ritz, Swift Dzire and the upcoming SX4 diesel having the same engine by the “DDIS” badge name. Indica Vista and Indigo Manza also uses the sae engine under the “Quadrajet” badge name. Obviously the Fiat sells Punto and Linea by the “Multijet” badge name.