Adriano Raeli, a graduate of The Art Center College of Design dreamed up this spectacular Ferrari F80 Supercar Concept, supposedly a successor to the iconic LaFerrari.

The LaFerrari has undoubtedly dropped jaws and resulted in countless weak knees since the day it was unveiled. But this F80 Supercar Concept is unlike any other Ferrari that you’ll ever see. Ever!

This thing isn’t far off from looking a potential, future Ferrari flagship. To start with, it’s low and wide. Elements in the design come across as disjointed; floating entities which give it a unique character- whether these elements, including the long, sweeping panels fall into the Ferrari scheme of things is purely speculative. We think it does. Be it the floating Ferrari logo up front, or the minimal rear- we’re sold on this one!

It’s an absolute treat to look at, especially from the top!

The vehicle will be powered by a hybrid drive train that pairs a KERS system with a combustion engine to produce around 1,200 horsepower. The iconic V12 from the LaF has been ditched in favor of a 900 horsepower twin-turbo V8 setup which is supposed to be paired with 300 horsepower KERS system-doing things the LaFerrari way! With a proposed weight of 1,763 pounds, the sprint to 62 mph should take a blitzing 2.2 seconds. Top speed is left to anybody’s imagination, but Raeli thinks it’ll do 310 miles per hour. 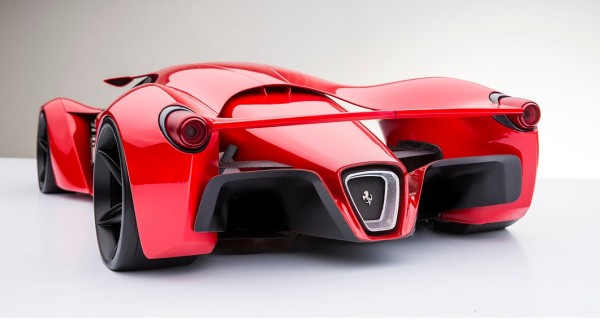 Head to the gallery below for more images of the Ferrari F80 Supercar Concept by Adriano Raeli!