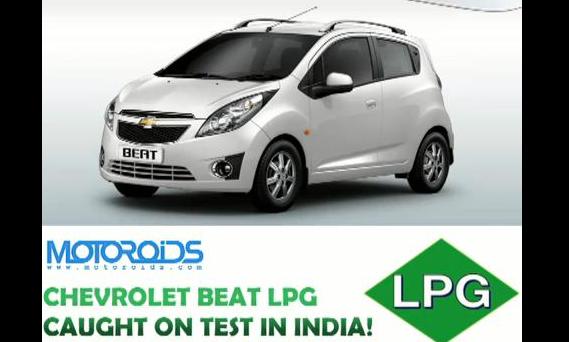 We showed you the static images of the Chevy Beat LPG earlier as well. This time, however we managed to shoot a video of the car running on the alternative fuel. The car was testing on the Mumbai Pune highway.
It’s notable that Chevy’s other small cars – the Spark and Aveo are already available with an LPG option. The sequential injection LPG kit on the Beat is going to be an advanced unit, and will offer certain advantages over the other units available in the market. One of the major advantages of the new kit is a smooth shift from petrol to LPG whenever you like. The new LPG variant may also be exported to European countries.

The LPG kit will fuel the same 1.2-litre engine that powers the petrol beat and should be launched sometime in December or January. There will naturally be a decline in power and torque, but hopefully it wont make much difference to the longevity of the engine. The test car here was accelerating briskly and touched 100+ speeds without any struggle – suggesting that the LPG variant should be practical enough for a city as well as highway drive.
With everybody talking about the launch of the Etios sedan, people seem to have forgotten that Chevrolet is also about to launch the diesel version of their Beat, which is going to be one heck of an economical car.
The Beat is currently the most economical car in its segment to buy and run. The diesel option will make it one hell of a value proposition. We have got some dope on the new car, stay tuned to know more.