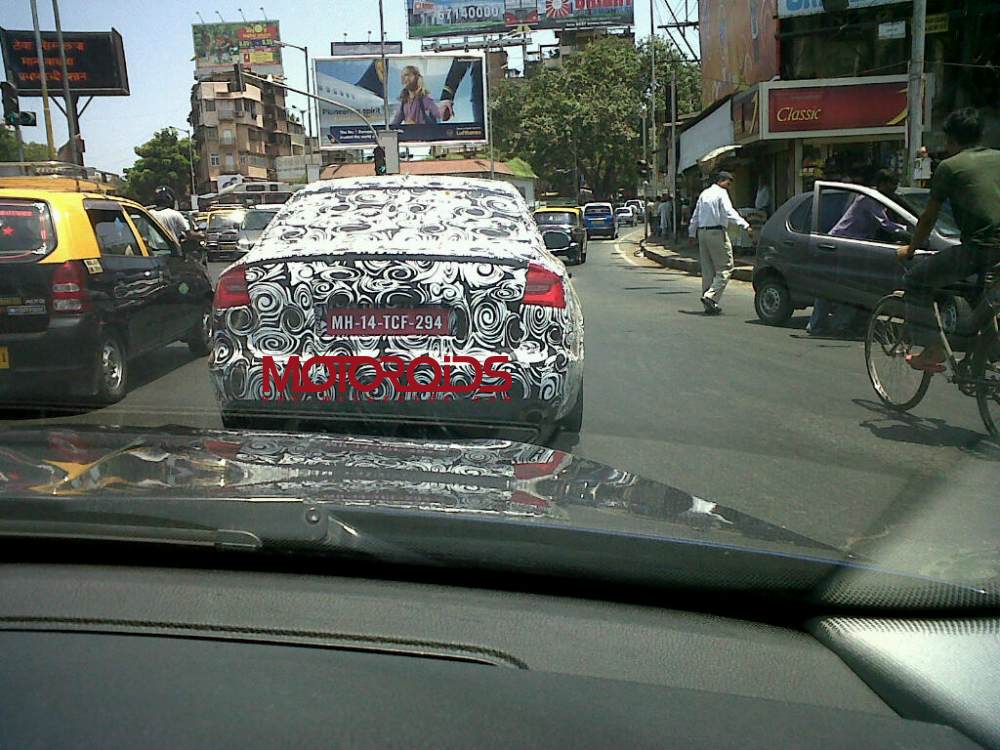 Audi is about to replace its rather long in the tooth A6 in July with a more modern, and better looking version in July, and here’ proof. These spy images of the soon to be launched A6 were taken by Motoroids Satyen Poojary and Bharat Verma. The test mule clad in swirly black and white camouflage was spotted by the duo in Mumbai, somewhere close to Mahim. The twin tail-pipes at the rear, the shape of the tail-lamps, which, by the way have been camouflaged with red tape at the upper end to disguise the real shape, gave the identity of the new car away.

Audi is planning to launch the new A6 in India with a choice of four engines – two petrols and two diesels. The diesel lineup will be completed by a 2.0-liter and a 3.0-liter unit, producing 175bhp and 245bhp respectively. The petrol engines would be a 2.8-liter FSI with 200bhp and a force fed 3.0 TFSI with close to 300bhp. Transmission will be taken care of by a seven speed, lightening quick S-Tronic dual clutch box. There also will be a Quattro version available as the range topper.

It’s important to note here that the segment where the A6 resides forms a major chunk of sales for the premium car makers. Both Mercedes E-Class and BMW 5-series are hot selling models for both the German brands. The introduction of the new A6, along with a solid marketing campaign should boost Audi sales in India substantially.

Elegance, with a dash of flamboyance is the new A6’s style USP. The car, while conforming completely to the Audi design philosophy boasts a flashy front headlamp studded with an LED cluster and an equally desirable interior.

The 2.0 TDI will be the base variant when launched, with the 3.0 TDi and TFSI sitting on the top of the lineup. The car will be priced competitively with the respective models of E-class and 5-series.