The Honda HR-V’s European version has been spied for the first ever time. The Honda HR-V is a sub-compact crossover that is already in sale in Japan under the name of Vezel. 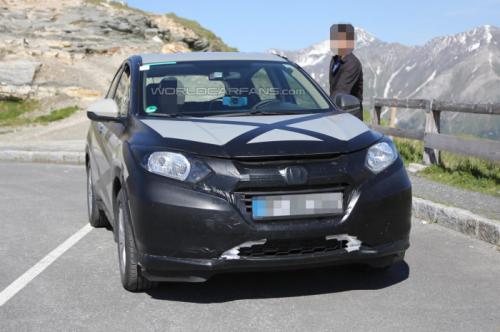 Internationally, the Honda H-RV or the Vezel will battle hardened competitors like the Nissan Juke and Chevrolet Trax. If it would have been destined for India, it would have battled it out against the Ford EcoSport and the Renault Duster. The spyshots show the Honda H-RV undergoing high altitude tests somewhere in the Alps, probably. Despite the camouflage, one can easily make out that the front portion of the car definitely bears a resemblance to that on the Honda City and the Jazz ( Fit ) hatchback as well! 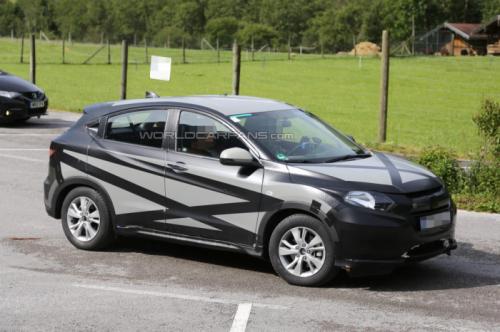 The Honda H-RV is perched below the C-RV in the Utility Vehicle pecking order. It does borrow some inspiration from the bigger C-RV in the styling department. Powering the Honda H-RV will be a 1.5 Liter i-VTEC petrol engine. It will possess peak stats of 132 PS and 154 Nm. While these figures aren’t really that impressive, they do appear enough to haul the Vezel across to fast speeds. Power from the engine will be transferred to the wheels via a CVT gearbox, and probably a 7-Speed Dual Clutch transmission too might be in the option list. 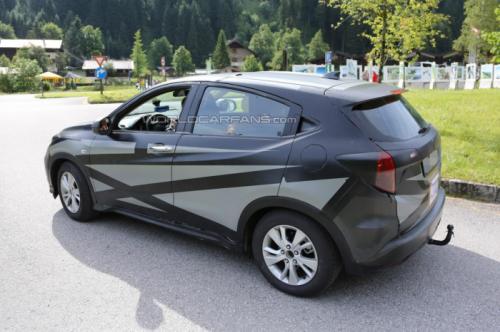 In the Japanese version, the Honda H-RV also carries a 29.5 PS hybrid electric motor alongside the regular petrol powerplant. This electric motor will completely take over the car’s hauling duties while within the city limits at very low speeds. At cruising speeds on the highways, the petrol motor will kick into action. The H-RV will be equipped with a Front Wheel Drive most probably, but it might get an All-Wheel Drive system on the higher-spec variants.

Honda feels that the H-RV will be too expensive for the Indian market with all its tech wizardry. Hence, the H-RV is a strict no-no for the Indian plans of Honda. How disappointing!!