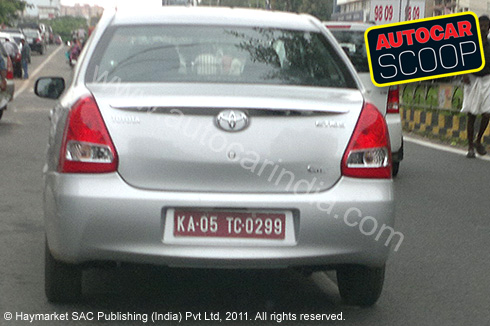 Toyota is banking on the success of its mid size entry level sedan – Etios. The long waits for the sedan has forced many buyers to switch to other cars. Many buyers also complained the lack of diesel engine for the Etios. Finally after all listening to the market demand, Toyota is developing a diesel version of the well appreciated car.

Toyota has actually started testing the diesel version of the Etios Liva. The car was spotted by an ACI reader. Looking at the image it is clear that Diesel Etios is slated for the festive season launch where the demand is high. Talking about what engine will the Etios use, it will be the same engine which does duty on the Corolla diesel but to keep the costs low this diesel Etios will be given a Fixed Geometry Turbo(FGT) rather than the expensive Variable Geometry Turbo(VGT) which the Corolla has. The absence of a VGT will translate in lesser power than the engine in Corolla. Well that sounds okay because an entry level sedan is also expected to give good mileage figures.

With its light weight and a diesel engine the Etios Diesel is expected to return amazing fuel efficiency and the performance will also be well rounded. Expect the prices to be a lakh more than the petrol version which is currently pegged at Rs 6 – 8 lakhs. With the diesel Etios, Toyota seem to have another winner at hand. Looking at its portfolio apart from the Camry the company is doing real good business in India. Expect the Liva too to come in diesel sooner or later.

Will you be interested in the diesel Etios for a price of 6 – 8 lakh?