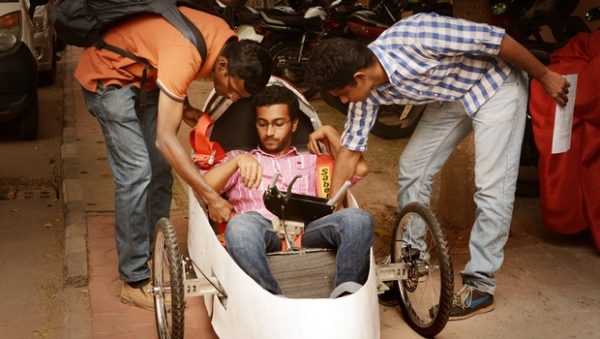 The future of automotive industry is greener and cleaner as newer technologies are developed to churn out maximum fuel efficiency from vehicles. One platform to showcase new product developments and prototypes is the Shell Eco Marathon. This year, the contest will see participation of a new prototype developed by three mechanical engineering students of the Government Engineering College, Barton Hill. The project has been funded by Kerala State Council for Science, Technology and Environment.

The three-member team, comprising of sixth semester Mechanical Engineering students of the Government Engineering College, claims that the prototype car run distances of upto 200 kilometers in just one litre of petrol. The team will fly to Philippines to participate and showcase their prototype at the Shell Eco Marathon scheduled from February 26 to March 1, 2015. The contest would be participated by 120 teams from over 16 countries.

The vehicle is powered by a 35.8cc Air-cooled 4-stroke OHC Honda GX35 engine, which, in stock form, delivers 1.3 HP of power and 1.6Nm of torque. The vehicle has been kept on a strict diet for minimum weight and has been designed for better aerodynamics which results in such great fuel efficiency figure. Safety features like collision warning system and FIA rated six-point seat belt are also part of the vehicle.

Do let us know your thoughts and opinions about this 200kmpl car developed by Government Engineering College, Barton Hill through comments section below. Stay tuned to Motoroids for more updates from the motoring world.