Is an Electric Harley-Davidson bike possible in the near future? Going by the spyshots of a bike from the sets of the next Avengers movie, we guess yes. 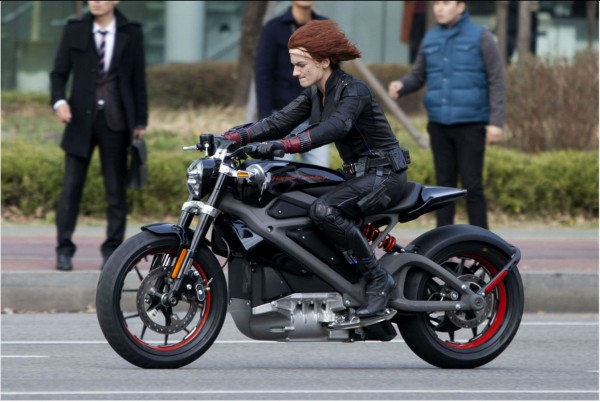 This glorious machine was spotted during the shooting of Avengers : Age of Ultron in South Korea. The bike was being ridden by a stunt double for pregnant Scarlett Johansson.

Could this be a production version of the first ever electric bike to roll out from the stables of Harley-Davidson? There are quite a few reasons in the affirmative.

The supposed Electric Harley-Davidson bike spotted on the sets is actually meticulous in quite a few other areas as well. Rules written by lawmakers in quite a few countries of the world say that the bodywork of the bike must extend as far as the end of the rear tyre. And the spied bike’s rear-tyre hugger ends exactly there. The disc-brake setups do not appear other-worldly, as they generally do in Sci-Fi movies, more so in Avengers.

It is known that previous movies involving the Marvel franchise have had connections with Harley-Davidson, especially the Captain America films. Hence, an appearance in the next Avengers movie isn’t too far-fetched. Nevertheless, challenges remain in front of the electric Harley-Davidson bike. Can it answer the question of the range covered in one full charge, an important parameter in deciding electric bikes? If it is able to overcome these hurdles, it will surely broaden Harley-Davidson’s appeal and reach.