I could start the review with a cliché of description by comparing the Diavel with the devil. But it would probably be the billionth time that someone would have done that. So let’s get to the point. This one here can be a death machine in the hands of the naive but a seasoned rider can ride it like a warhorse charging through the battlefield. The Diavel is probably one of those select machines that can be termed as the Toruk or the Last Shadow in the motoring universe. It’s wild, unusual, intimidating, even, and yet so desirable. It’s made to deliver the adrenaline rush only the fiercest V-twins ever could, and boy does this one do just that. 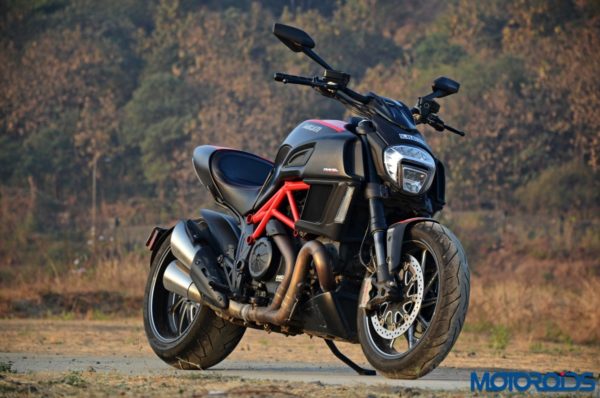 Here is my experience with the Ducati Diavel Carbon over one of the more exciting weekends in my life. We are not doing a typicaleview of the Diavel here, but breaking it down in ten interesting points.

1: The Diavel Carbon is bad to the bone. It is massive, crafted with true Italian artisanship and is a definite head turner on any part of the planet. Termed as a power cruiser, the Diavel is a marriage of power, style and comfort wrapped in a package so perfect that it’d (metaphorically) pluck your heart out from your chest if you have a thing for such extreme machines. So who’s responsible for a design that’s so beautiful that it’s almost a sin? A team led by none other than Pierre Terblanche – the person who is responsible for creating masterpieces like the Ducati Supermono, the 999 and the Confederate X132 Hellcat Speedster. 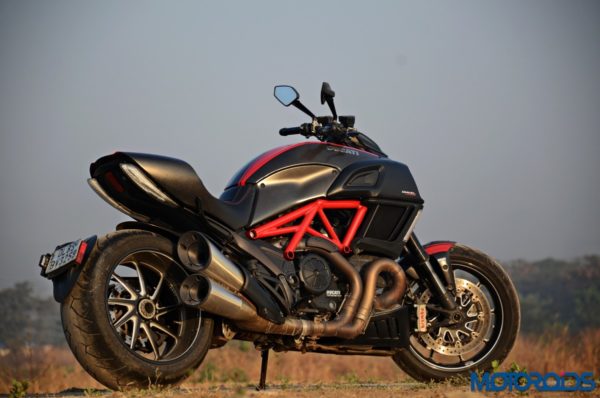 2: The motorcycle, with its LED headlight, the inspiring two-piece instrument cluster and the massive 17-litre fuel tank looks absolutely menacing. The throne like sit-in saddle, the massive pipes coming out from the engine and the slash cut exhaust canisters add tons of character to this machine. And yet, it is appealing enough to be loved by every living soul on the planet, even the ones who do not understand motorcycling. What we had for the test was the Carbon edition that’d burn a bigger hole in your pocket. For the extra moolah, though, you get a carbon-fibre fuel tank, pillion seat cowl and front fender, which helps the motorcycle shed some crucial amount of weight. Then there are those Marchesini forged wheels that further aid in weight reduction, offering better power to weight ratio. The single sided swingarm makes it a proper exotic. The dual tail light with integrated turn indicators gives the rear a near perfect design which is uncluttered and should make anyone you overtake on the highway realize that something special just passed him. Adding to its cruiser like character is that massive 240 section Pirelli Diablo Rosso II rear tyre which gives the motorcycle solid stability on straight line as well as around the corners. 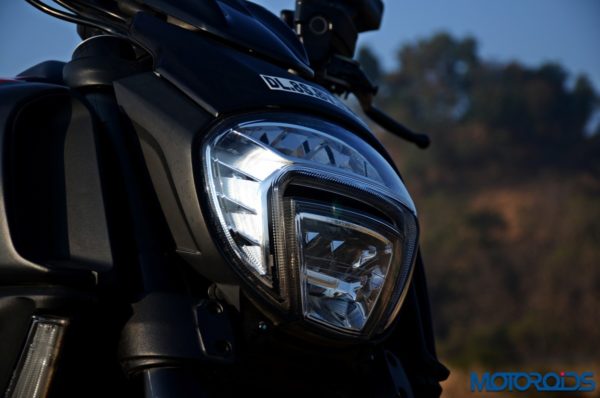 3: Then there is the feature list. On top of the list is the key fob. We’ve had motorcycles that use a key fob but this one was rather different. You don’t have any physical buttons on the key fob to lock or unlock the motorcycle. The keyfob features a proximity sensor and a key which is used to open the fuel lid or remove the saddle. Once in vicinity, all you have to do is push down the slider that doubles up as the engine kill switch. One little push and the security system unlocks the handlebar and turns the power on. Slide the engine kill switch upwards and you’d find the ignition button. To shut down, push the slider down for a few seconds to turn off the motorcycle. Another long push would lock the handlebar. 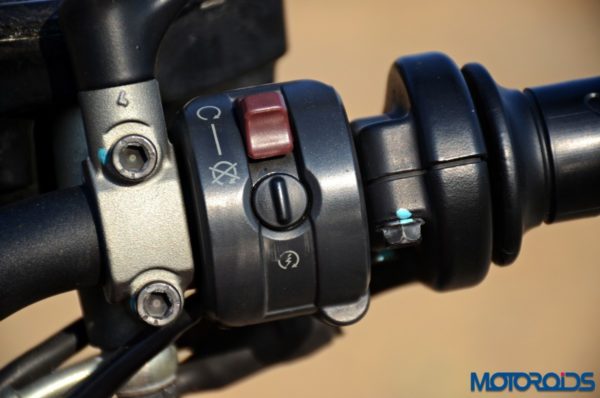 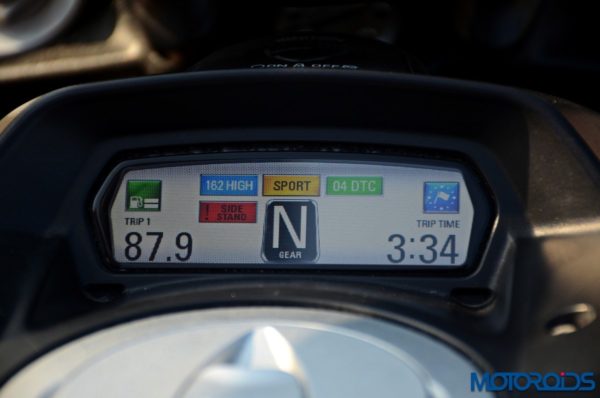 5: Then there is the electronic wizardry that’s aimed to keep you safe and alive. The motorcycle comes equipped with different riding modes and power modes to suit your requirements or riding skills. There are three riding modes – City, Touring and Sport – which are tuned for different throttle response, power output and traction control levels. You can tailor them for your requirements too where you can either select between full power, limited power, throttle response level and traction control setting. Bosch ABS keeps things under control under hard braking. 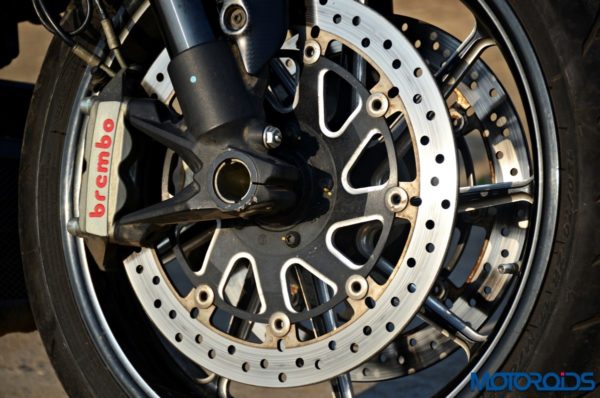 6: Colossal Firepower! The 1198cc Testastretta 11° L-Twin, liquid cooled engine is capable of creating mayhem that would toss you off the bike’s back if you’re not careful. The engine is tuned to deliver 162 hp of power at 9,250 rpm and 130 Nm of torque at 8,000 revs. The throttle is sensitive and the Diavel would lunge forward furiously with any aggressive inputs. You can always tailor the response using the onboard electronics. 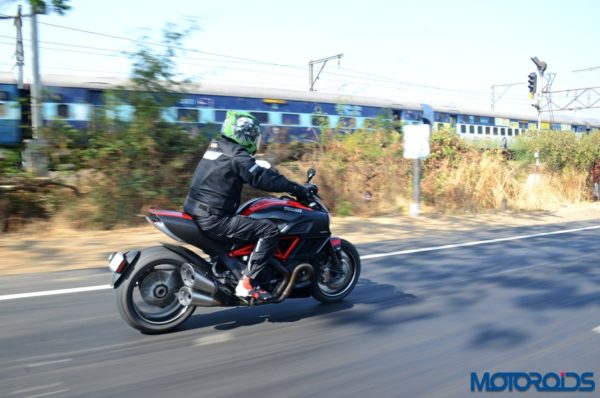 7: The engine, as aforementioned, can be used in three modes – Road, Touring and Sport. In Road mode, you’d get only 100 hp of power and the throttle response would be set on ‘Low’ so you can putter around town with more than ample power while still saving fuel. Touring mode gives you access to all the 162 ponies and the throttle response is set to mid so that you can cruise on the highway with occasional bursts of power. These two are probably the best modes to stay in if you have recently graduated to the litre-class and above segment because the Sport mode is where things get devil-icious. Ride anywhere above 3,000 rotations and the Diavel will haul you without any complains. It gets pretty rough below the 3,000 revs mark. Things get properly manic when you twist that throttle in Sport mode. As the revs climb above 6,000 mark, the Diavel turns into a monster with an angry loud growl emanating from the slash-cut exhaust. It revs all the way to 10,000 clicks at which it is capable of achieving its maximum speed of 270 kph. It’s almost unbelievable the effortless way in which the engine propels the bike’s 239 kg kerb weight. 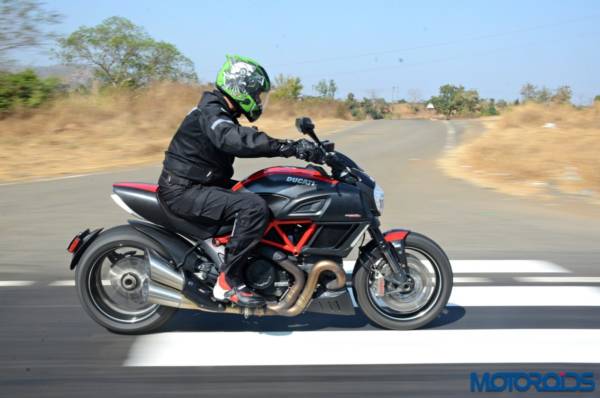 8: You’d want to have some really potent brakes on that 239 kg piece of mass. Performing the task are twin 320 mm semi-floating discs with radial Brembo Monobloc 4-piston callipers upfront and 265 mm disc with 2-piston floating calliper at the rear and they are absolutely incredible to say the least. It took a while getting used to the sharp feedback from those Brembo Moboblocs on day one but things got fairly easy thereafter. It’d stop in a blink and you’d probably be looking in the rear view mirror to see if a drogue parachute was unfurled behind you. Lord bless the sharp and responsive ABS on the motorcycle as without those, the Diavel would probably toss you off its back like an angry bull. The system isn’t too intrusive to play a spoilsport and you get a sharp feedback from the brakes to every input. You can have some more fun by tuning it down further for an even sharper feedback. 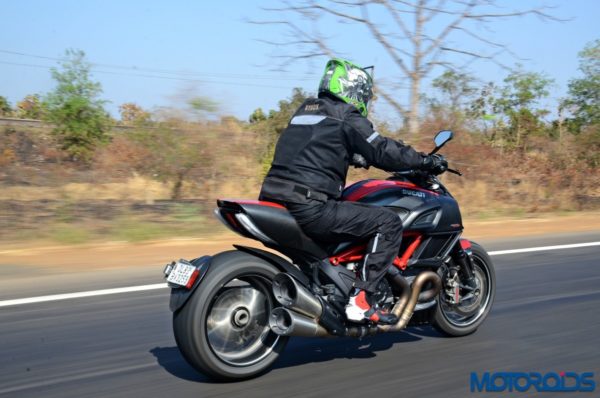 9: The seat height is another plus point for the Diaval. At 770mm, it’s one of the most accessible motorcycles out there, even for folks who are vertically challenged. Moving it around is remarkably easy as you place both your feet firmly on the ground. But does that become an issue while tackling speedbumps? The motorcycle didn’t bottom out even once through the three day test but we did have to tackle those extra tall speedbumps carefully. The saddle itself is fairly comfortable too on long hauls thanks to the generous cushioning and ergonomic design. You sit in the seat with the recess acting as an aid preventing you from sliding back when accelerating hard. 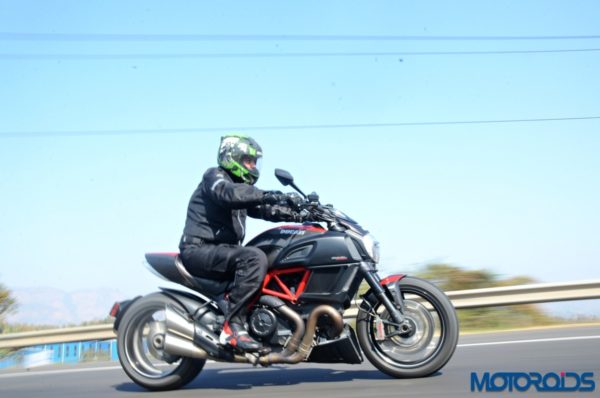 10: How does it handle? Riding a 239 kg motorcycle with a 1,580 mm wheelbase and a 240 section rear wheel, we had our speculations about the Diavel’s characteristics around the corners and we weren’t completely wrong. You’d need to put in an extra effort to lean the motorcycle into a corner. But let’s face it, you can’t demand a supersport handling capabilities from a power cruiser and this one isn’t supposed to behave like a Panigale. The Diavel is meant to be rock solid on straights, though it does need you to put in some extra effort while making it keep its line around tighter bends. It’s probably the best motorcycle to make someone understand countersteering, wherein you have to push the inside handlebar to make the bike turn. It has a tendency to go wide so you have to have certain skills to make it turn as desired at fast speeds. The suspension settings, which can be tailored at the twist of the knob, are easy to adjust as per the rider’s requirements too so everyone can have a perfect tune. 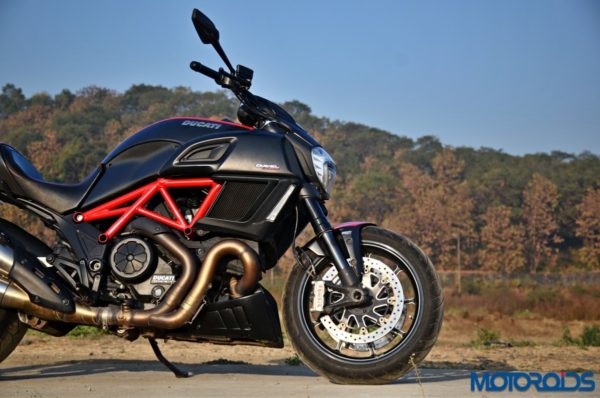 We loved the Diavel, but as they say, nothing is perfect. So here is a list of a few things which could have been better: 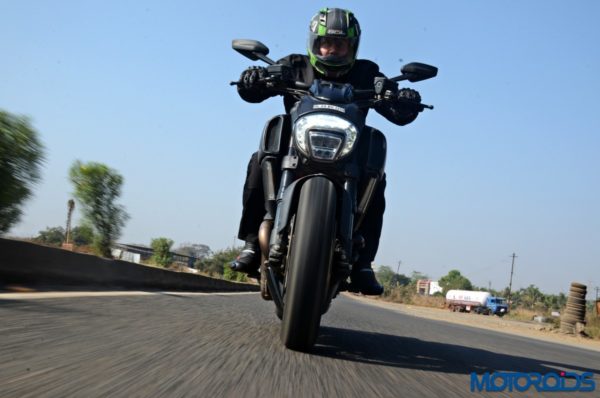 Can I call myself Toruk Makto or the Rider of Last Shadow? Even after three days with the motorcycle, all I could really do was just scrape a small layer of its performance and there is so much potential that it’d be a crime to unleash it on public roads. The Diavel truly redefines the conventional cruiser tag and shows why it carries the ‘Power’ prefix. This one is for folks who admire design and appreciate art. Those who go by the numbers to ascertain value should probably find themselves something, well, more regulation.

Check out the complete technical specifications followed by a massive image gallery of the Ducati Diavel Carbon below. Do let us know your views about the review and the motorcycle through the comments section below.