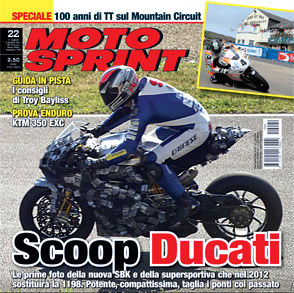 What you see here are the first ever spy pictures of the replacement of Ducati’s flagship 1198. And the big news is that Ducati are making a shock departure from their heritage with this one. The company prefers performance, engineering and functionality to heritage for a change. Elements which were considered indispensable for any bike to be qualified as a Ducati have been shown the bin so as to achieve better dynamics and power.

The new bike isn’t much of a Ducati. As MCN observes, the bike has a tail resembling the RSV4, a side-mounted shock absorber that mimics the Kwackers and an underbelly can that draws inspiration from Buells. But Ducati won’t let its sentiments block the way forward this time around. The primary objective this time around is to achieve the best performance possible, even if it is at the cost of losing some character. Heck, even the steel trellis frame is gone!

As a gentle respite for the hardcore Ducati fans, a single sided swing-arm and an L-shaped twin still remains. Seems like one Italian man who calls himself the Doctor, and who’s having a hard time with the out-dated machinery out there in the middle at the track, is finally putting some sense into this company. Watch out Honda and Yamaha, as the new SBK makes its debut in 2012!