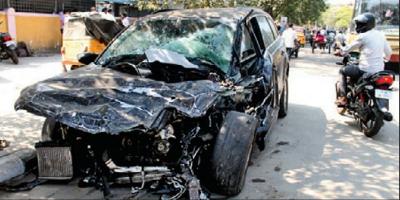 One more life has been lost to drunk driving as a businessman rammed his Audi Q7 SUV into a motorcyclist, killing the rider on the spot of the accident. Mohammad Safiq, 31, who was at the wheel and Mohammad Farook, 39, the passenger, were reportedly under the influence of alcohol at the time of the accident. The deceased, Kevin Raj, 25, was on his way back home from work.

The SUV was allegedly driven at 120 kph. The accident took place at Anna Salai, near Chennai on Thursday morning. The SUV driver also caused a pile-up with a truck. The duo inside of the SUV survived with minimal injuries. The driver and fellow occupant of the high-end SUV have been arrested. A case has been registered under IPC Section 304 (II) (culpable homicide not amounting to murder) against the duo.

“We sent them to Government General Hospital and medical tests confirmed that they were under the influence of alcohol when the accident took place,” a police officer said.