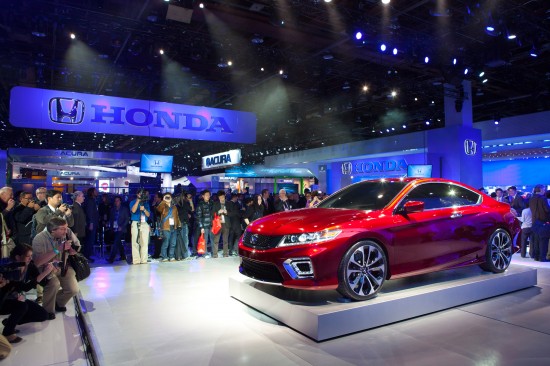 Recently, we saw the all new Toyota Camry getting appreciation around the world. Many say that the popular car has a hint of a Honda Accord in it.The Japanese auto giant seems to be busy taking care of that.Honda Motors have revealed the next generation Honda Accord’s concept model at the Detroit Auto Show. Honda decided to keep people from having a view of the interior. However, Bluetooth connectivity, ‘intelligent’ display and a modern infotainment system can safely be expected.

The 2013 version of the Honda Accord will offer as many as three new powertrains.The base model will produce a healthy 181 hp and 177 lb/ft torque. The higher priced variants will sport a 3.5 liter V6 engine mated to a six speed auto or a six speed stick shift. Last but not the least, a plug in hybrid system will also be on offer.The new Accord should be perceived to be more more upmarket than ever before. What with Honda planning to introduce the 2013 model with advanced features like a lane departure warning and forward collision warning system.