Home Datsun Datsun World Premiere to be held on July 15 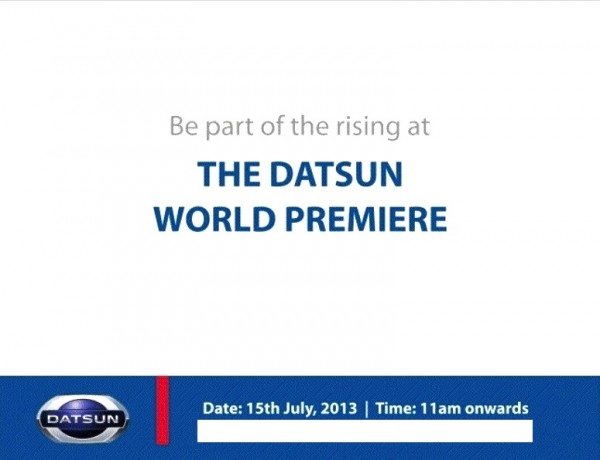 It has by now become a well known fact that Datsun- the entry level brand of cars from Japanese auto maker giant Nissan, will make its world premiere on 15th next month.

Datsun cars will be primarily targeted at emerging car markets like that of our country, Indonesia, Russia and South Africa. It has by now become a well known fact that the first two Datsun cars are hatchbacks, which have been codenamed as the I2 and the K2 respectively. The K2 is being developed at Renault-Nissan’s Chennai technical facility.

In India, the Datsun K2, the first car from Datsun, will rival the Chevrolet Beat, Hyundai Eon and the Maruti Wagon R.

The K2 will also spawn out a 7 seat MPV at a later stage. The K2 MPV might debut at the 2014 Delhi Auto Expo early next year and would first be launched in Indonesian market.

The I2 hatchback, the second car from Nissan-Datsun, is expected to be launched in third quarter of 2013. The I2 will battle it out against the very popular Maruti Suzuki Alto 800 and might emerge as the bread and butter model for Renault-Nissan India. Along with the K2, the I2 is being developed at Renault Nissan Technology & Business Centre, near Chennai, India.