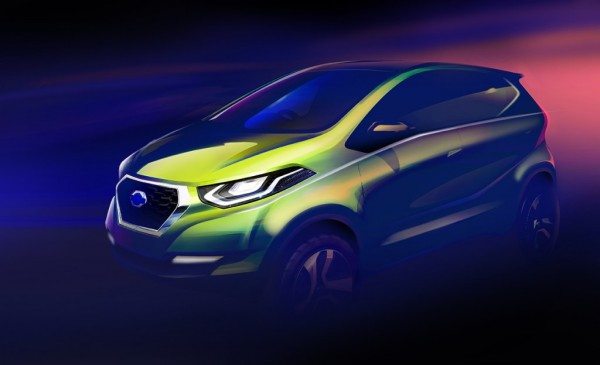 Datsun today revealed a sketch of its upcoming concept car, which will make its global debut at the fast approaching Delhi Auto Expo early next month. The manufacturer says that the new Datsun Concept Car “represents a possible direction for the future expansion of Datsun’s model line-up for up-and-coming young customers in high-growth markets, such as India.”

While the manufacturer has refrained from revealing the name of its latest concept car, there are very good chances that it previews the upcoming Datsun i2 small car. Datsun i2 small car will find itself slotted under the Go hatchback (codename K2) and will lock horns with Maruti Suzuki Alto, Chevrolet Spark and the likes.

The Datsun i2 will be underpinned by an all-new platform and the car won’t be share much with the bigger Go hatchback, which is based on the old Micra platform. The Datsun i2 could very well redefine the term affordable motoring and offer class-leading space, frugal engine, cheap spares, et al. It is pretty much for sure that the Datsun i2 price will start under INR 3 lakhs and it is being said that the Datsun branded Alto rival would come only by late-2015/early 2016.  Initially, Datsun’s target would be to sell 8,000 and 9,000 units of this model very month. However, production would be increased if demand arises.

Nissan-Datsun hasn’t divulged details on the powertrain options but we believe that the car might come equipped with a sub-1.2 litre engine that will be mated to a five speed gearbox. There are good chances that this motor will offer an ARAI certified fuel efficiency of above 20kmpl.

Not much is known about the upcoming Datsun Concept Car or the i2 hatchback but safely expect us to update you as soon as we manage to dig out more details on these models. Stay tuned folks!