More and more manufacturers are starting their production facility in India and using it as a export hub. Latest to join the list of exporters is Daimler India Commercial Vehicles (DICV) who rolled out its first Left-Hand Drive (LHD) FUSO trucks for the export markets at its manufacturing facility in Oragadam near Chennai.

The first heavy-duty truck – the FUSO FJ, will first be launched in markets like, Nigeria, Ethiopia and Egypt, and in the mid-term will be rolled out in further markets in Africa, Latin America, and the Middle East. With this, Daimler Trucks Asia strengthens its portfolio of new FUSO trucks for the non-Asian markets as well, adding thrust to its export strategy. A variant of the new DICV-made FUSO LHD will be showcased at the upcoming IAA Hannover show in September 2014. 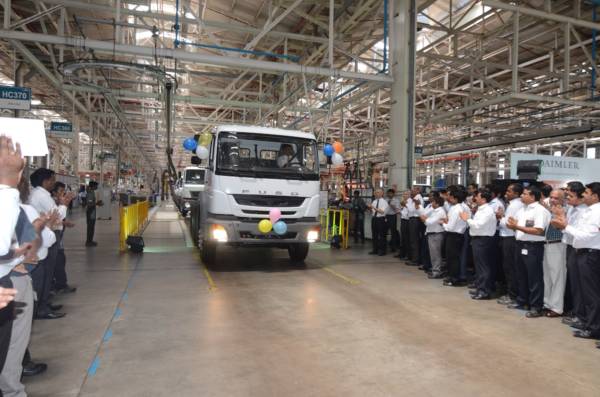 With a clear view on the growth potential in Asia and Africa and beyond, FUSO is in preparation to continuously add further markets to its strong market presence. Daimler Trucks Asia expects to gain additional growth momentum in the future markets on top of the current existing markets from its new Asia Business Model introduced in 2013. The new business model creates synergies by bundling the strengths of the Japan-based Mitsubishi Fuso Truck and Bus Corp. (MFTBC) and Daimler India Commercial Vehicles (DICV) under the Umbrella of Daimler Trucks Asia.

The Asia Business Model is an integral component of Daimler Trucks Global Excellence Program ‘DT#1 (Daimler Trucks Number One)’. The program has been designed to secure Daimler Trucks leadership position in the key growth markets in Asia, Africa, the Middle East, and Latin America. By leveraging its operational strengths in Kawasaki, Japan (MFTBC), and Chennai, India (DICV), the new business model is targeted to double its sales (MFTBC and DICV combined) to over 290,000 units by 2020, and thus, as “Daimler Trucks in Asia” making a major contribution to Daimler Trucks overall sales target of over 500,000 units sold in the year 2015 and more than 700,000 trucks in the year 2020.