You may have seen people scared or pissed off by the loud exhaust notes of supercars like Ferraris or Lambo’s. Some people freak out and involuntarily even kick such vehicles if they get scared by the sudden revving of these V10 machines. 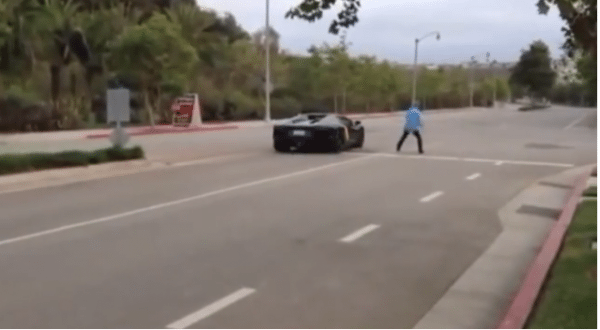 Now, here in this video, you can see a crazy guy throw a rock at a Lamborghini Aventador for reasons not known clearly. Initially, it looks as if the guy wants to block the Italian raging bull, but suddenly he moves aside and throws a rock at the supercar.

The rock hits the car and you can actually hear it very loud. After the hit, the Lambo driver reduces his speed, but seeing the guy take out another rock, he slams the gas and flees the scene.

We feel sorry for the Lambo guy ! The rock must have caused a big dent in the carbon fiber panels of the Aventador. What do you think must have been the reason for such a crazy act ? Do let us know your views in the comments section below.