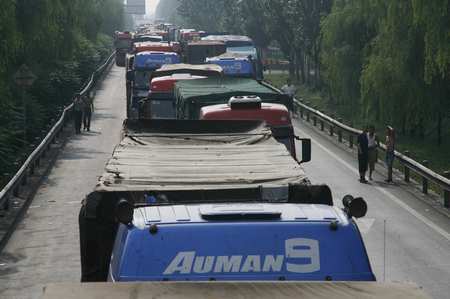 We suggest you to take a print out of this article and pin it up on the dashboard of your car. So, the next time you are tempted to hurl incest abuses while stuck in traffic jam, you would be pleasantly reminded of how lucky you are, for not being one those drivers on the National expressway in China.

Since August 14, trucks and cars have piled up, with the line of cars now spreading up to 100 kms on the expressway between Beijing and Hual’an in Heibei Province in China. No one quite knows how it all started, but since past nine days, cars have been slowing down until almost coming to a stop. Over 10,000 vehicles and 30,000 people have been stranded. The cause of the traffic jam is not an accident, extra terrestrial activities or boredom. It’s because of the precarious infrastructure, on-going road work which has reduced the traffic carrying capacity of the expressway. Authorities who are working their way to ease the traffic,  have stopped cargo trucks exceeding four tones from using the expressway. However, the officials have estimated the jam will last for a month or so. Taking delight in the misery of over 30,000 stranded drivers are the residents and nearby locals who reportedly are charging ridiculously prices for water and food.