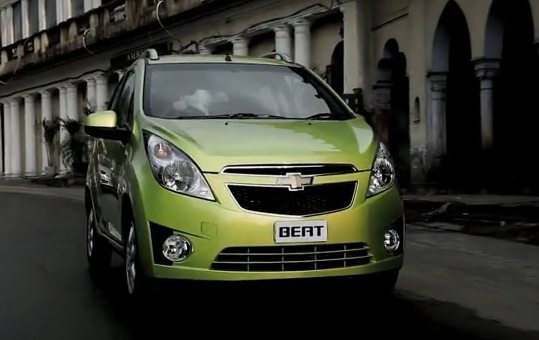 The Beat Diesel which we have been reporting right from the time the news was leaked, finally all the speculations of its launch have come to an end. GM has made an official announcement regarding their one liter 3-Cylinder diesel engine for the Beat will debut in the second half of 2011. With the fourth month going the launch is hardly two months away.

The Diesel Beat which could be badged as XDSE which stands for Xtra Smart Diesel Engine will produce a torque of 140Nm @1750 Rpm and speculated to give power figures of 57 – 60 bhp. With the introduction of a small one liter engine Chevrolet is going to change the rules of the hatchback game.

Here is the  press release

* 1.0-liter three-cylinder engine to have best-in-class fuel efficiency and performance for its size

* First application to be the Chevrolet Beat for India market

Torino, Italy — A multinational team led by GM’s Torino Engineering Center and supported by engineers from GM India today announced that production of a 1.0-liter three-cylinder diesel engine will start in June 2011. The diesel expertise of the GM’s Torino engineers has resulted in an engine that is expected to enhance GM’s competitiveness in the Indian market.

“The exclusive design leveraged the capabilities of dozens of Torino-based diesel engineers to deliver what is expected to be a leader for its size in performance and fuel efficiency for the Indian market,” said Stefano Caprio, the 1.0-liter engine global program manager and chief engineer. “Contributing to the great fuel economy is an innovative, lightweight three-cylinder design.”

The 1.0-liter turbo-diesel engine will be manufactured at GM India’s Talegaon plant in Maharashtra and will be launched on the Chevrolet Beat in the second half of 2011.

“GM India President & Managing Director Karl Slym said, “This new state-of-the-art turbo-diesel engine will enhance the competitiveness of our Chevrolet line-up in the Indian market. The addition of diesel options to our portfolio will continue to improve our sales volume and market share,” Slym added.