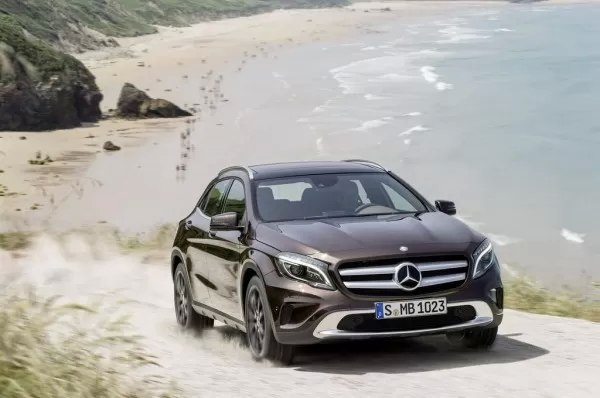 We reported in detail when Mercedes Benz released details and images of the new productions spec 2014 Mercedes-Benz GLA Class and now, the car maker has released a couple of videos showing the new GLA Class in all its glory.

The upcoming 2014 Mercedes Benz GLA looks like an A Class on steroids. Unlike the GLA Concept, which boasted of a very aggressive stance, the production spec car looks more of a Volvo V40 adversary rather than an Audi Q3 rival.

The upcoming Mercedes GLA Class will be the smallest-ever crossover in Stuttgart based manufacturer’s product portfolio. The GLA will play the baby brother to the much bigger GLK. Underpinning the new GLA is the much publicized MFA platform. The new 2014 Mercedes Benz GLA measures 4417 mm in length, 1804 mm in width and 1494 mm in height.

The car is highly aerodynamic with a Cd figure of 0.29. The GLA is the first Mercedes Benz SUV to be optionally available with the new-gen permanent all-wheel drive 4MATIC system, which benefits from fully variable torque distribution. 2014-Mercedes-GLA-pics-4 The GLA could be powered by a couple of petrol engines that will displace 1.6L and 2.0L respectively. Also on offer would be a set of oil burners that would displace 1.8L and a 2.1L.