Honda’s tuning arm Mugen has released details about a souped up version of the new City. Mugen has transformed the car into a sporty sedan with the Mugen kit, in the Philippines.

This Mugen treated Honda City will a production run of only 20 units in the Philippines. The Mugen accessories for the City include a front sports grille, front and rear under spoilers, side spoilers and a rear wing spoiler. The car wil be available with the 1.5 EL automatic variant, which outputs 120PS and is mated to a 5-speed auto transmission. The car will also be available in the exclusive Taffeta white colour. 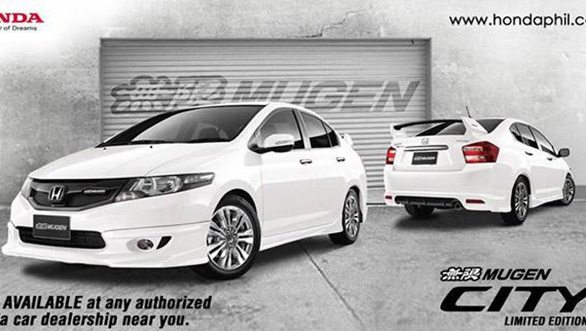 Honda held the global unveiling of the new gen Honda City in India, in November, and the car is racking up bookings already. The launch of the car in India is slated for 7th of January, 2014.

The new Honda City petrol is powered by a 1.5 liter 4 cylinder SOHC  i-VTEC motor, which outputs 119 PS of max power. This engine will be available with a 5 speed manual and a CVT transmission. The petrol engine variant of the City has an ARAI certified fuel efficiency of 18 kmpl.

The Honda City diesel will be powered by the same engine from Amaze. This oil burner has a max power output of 100 PS and peak torque of 200 Nm. For the City though, this engine will come mated to a 6 speed manual transmission (versus the 5 speed manual on Amaze). The 2014 Honda City diesel has a class leading ARAI tested fuel efficiency figure of 26 kmpl. The extra 6th cog has helped achieve this higher figure.