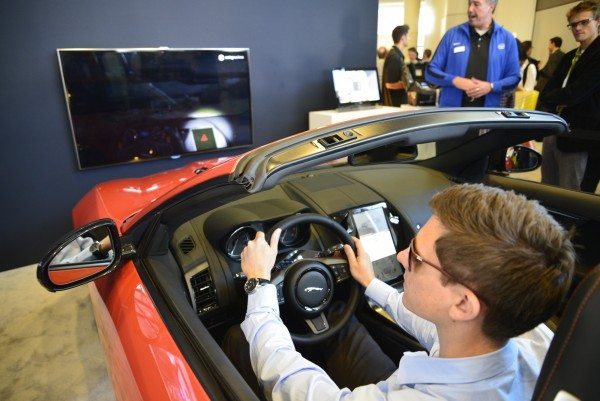 Long stretches of roads can be tiresome and make driver feel distracted, or worse, drowsy after a while. Car makers and technology giants understand the seriousness of the situation and are already working on ways to keep the drivers alert while driving the car, hence, making the occupants of the car and pedestrians safer. One such technology is being jointly developed by Seeing machines, a world leader in the development of computer vision related technologies that help machines understand people by tracking and interpreting human faces and eyes, along with British car major Jaguar Land Rover and world’s largest semiconductor chip maker Intel.

The trio is is developing a sensing technology that monitors the driver’s face and eyes to reduce distracted and drowsy driving. Seeing Machines is demonstrating its Driver Monitor System (DMS) at the International Consumer Electronics Show in Las Vegas. Seeing Machines is demonstrating its DMS in a Jaguar F-Type prototype developed jointly with Intel at Jaguar Land Rover’s new R&D facility in Portland, Oregon.

DMS uses attention-monitoring sensors in the dashboard to detect eye and facial movements so it can identify if the driver has become inattentive, either due to drowsiness or distraction. It is so sophisticated it can understand the state of the driver in real world conditions, including bright sunlight and if the driver is wearing glasses or sunglasses. To deliver the processing power required by the DMS system, Seeing Machines asked Intel to install hardware in the F-Type prototype based on its newest Intel Core i7 chips.

Speaking about this new technology, Nick Langdale-Smith, Vice President, Seeing Machines, said, “The algorithm we have developed for DMS has the potential to seamlessly enable a host of safety and autonomous driving features and reduce the potential for accidents caused by the driver not paying attention. DMS is unique because it is the only driver monitoring system that can achieve this even if the driver is wearing shades, or in full sunshine.”

Dr Wolfgang Ziebart, Jaguar Land Rover Engineering Director, added, “The attention-monitoring technology we are showcasing at CES has huge potential for road safety. If the driver’s gaze moves towards the infotainment screen or out of a side window, and the car identifies this, then the system could alert the driver to hazards earlier. DMS could even enhance settings in safety systems like Autonomous Emergency Braking, to reflect the driver’s lack of attention. As the car drives up to a hazard, the brakes could engage autonomously sooner because the car realises the driver has not seen the danger ahead.”

DMS could also help the car share information with the driver more effectively. Jaguar Land Rover is currently researching a next-generation heads-up display that could utilise the full width of the windscreen. The idea is to present the right information to the driver at the right time, without having to take their eyes off the road.