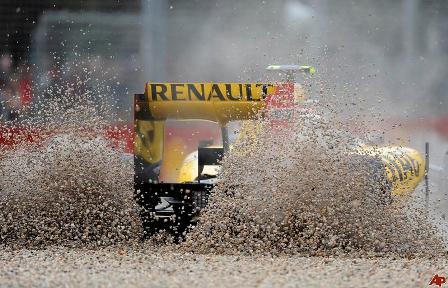 This weekend proved to be one of the toughest on-track for the resurgent Renault F1 team. Whilst off-track they had a reason to celebrate; with both Red Bull and Ferrari having confirmed to maintaining their driver line-up going into the next season, it is all but certain that Robert Kubica will stay put with the French squad. Post their decent performance in Turkey, I believed that the Renault team would only be on their way up the grid, however, lack of engine horsepower could be blamed for their poor show in Canada.
Starting the races in positions 8 and 14, it was never really going to be an easy race for Robert Kubica and Vitaly Petrov. The Russian F1 rookie especially has come under fire after his performance in Montreal, where he was not only penalized for jumping the start, but also for bumping Pedro de la Rosa at the first corner. He eventually finished in 17th place behind the Lotus of Heikki Kovalainen. Petrov needs to get more consistent and have more races like the ones in Turkey; indeed reports suggest that the Renault F1 team is already looking out for a replacement for the 2011 season. And they are looking at luring none other than Kimi Raikonnen back into the sport after his tryst with Rallying; with Adrian Sutil being mooted as the other alternative. The Russian needs to calm his nerves and curb his aggressive instincts a little. He would do well to take a few leaves from Robert Kubica’s notebook; especially given the clause that Renault will only re-sign him if he gets 25% of the points scored by the Pole.
Robert Kubica had a bit of a ragged race himself in what he described as the “toughest 6 points haul of his life”. Starting on the softer tyres, he found himself pitting earlier than most of the competition. While his duel with Michael Schumacher left him on the grass, his late cross-over maneuver on Force India’s Adrian Sutil, going into the pit-lane earned him a reprimand from the Stewards. 7th place eventually is not too bad, given the situation and his 4th row starting position. The team should definitely take back some positives from this race. But as I said after Turkey, they need to be on avant-guarde to protect their position from the Force-India cars, who showed that they were pretty much able to hold their own against the Renault.
I also sincerely hope that Petrov finds his feet back. He really has been the most exciting find in F1 this season and it would be a shame to see him walk away next year; especially from a team that has been on the rise this season and promises to get better. Will it be a case of a brilliant light flickering out a little too early?