Gannet Design -the Swiss design and strategic consulting house is back with one more concept, this time centered on a Moto-Guzzi. This one’s called the Le Mans Sprinter.

With the huge fairing up front, one could say that this concept harks back to the legendary Moto Guzzi Otto/V8 from the 50’s, one of the few motorcycles in the world to carry a V8 engine in its midst. However the design revolves around a Moto Guzzi 850 Le Mans Mark III from the early 80’s, albeit with a heavily modified frame and that fairing is in fact, inspired from gannet seabirds- them being the inspiration for the company’s name and logo as well. Although a few references from the 500 V8 have been incorporated in the overall design, the fairing’s design is loosely based on the seabird’s looks and other attributes. 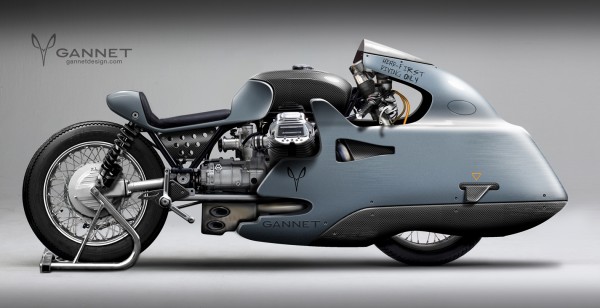 “Head First Diving Only”- scribbled on the fairings of both the bikes signify the hunting tactics of these seabirds. They are known to dive from 100m and more head-first and slice like an arrow into the water for some unlucky fish, which are plucked from the water in a jiffy by those strong beaks. Gannet says these bikes imbibe the bird’s craziness, special beauty and characteristics. 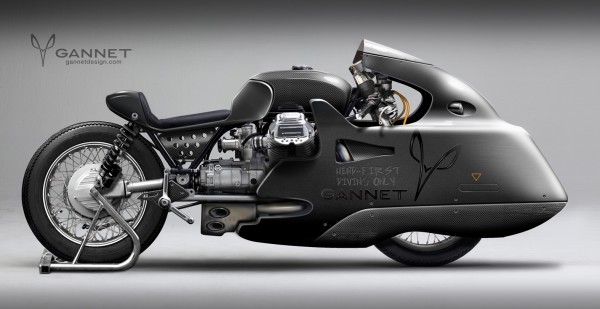 The Le Mans Sprinter concept spawns two variants- the 1R.Blue version, which would be a drag sprinter,  is attached with little wing for extra down force and the 2R.Black version, which will come with a small head light beam for potential long distance racing with night legs. Though the bikes are mere design concepts at the moment, Gannet reckons events like the fun drag race at Wheels&Waves – Punk`s Peak Race or Glemseck 101 would be the perfect environment to race this beast in the future.