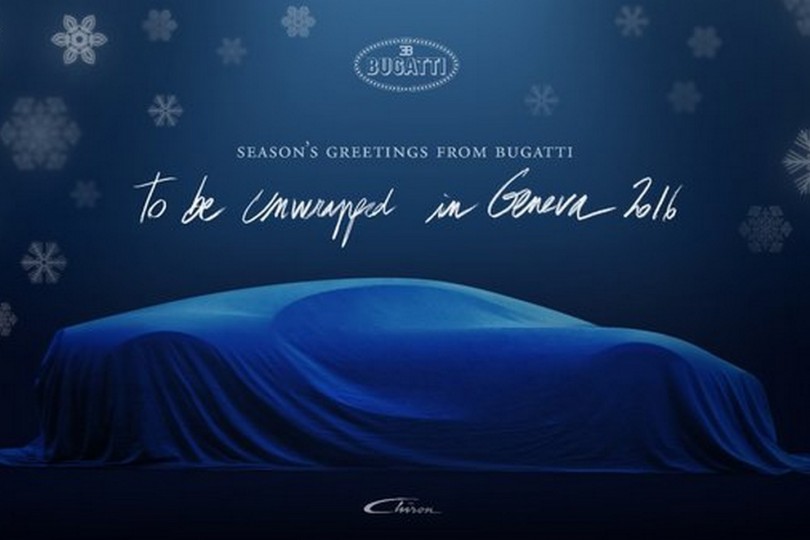 Christmas is just around the corner and Bugatti is using the occasion to tease its upcoming hypercar, the Chiron through season greetings. The holiday greeting is designed with a Bugatti Chiron, covered under a blue robe with a text stating “Season’s greetings from Bugatti, to be unwrapped in Geneva 2016“.

For the folks who may have missed the earlier articles about this upcoming hypercar, the new Bugatti Chiron will be the successor of the superfast and luxurious Veyron. The Chiron is named after legendary race car driver Louis Chiron who has won several major Grand Prix races for the brand during the 1920’s and the 1930’s.

The hypercar has been spotted on several occasions, revealing some details about the final product. From what we understood from the previous sightings, the Chiron will feature a LED headlamps and DRL’s, the customary horseshoe grille, a redesigned hood as compared to the Vision GT concept and a freshly designed front bumper with air intakes. As seen in the earlier spy video, the Chiron will also get LED tail-lights, a diffuser and a lowered exhaust system as compared to its predecessor.

Bugatti has remained tight lipped about the mechanical details but the Chiron is expected to draw power from the to be powered by a massive W16 engine that would deliver a eyeball flattening 1500bhp of maximum power and a colossal 1500 Nm of torque. The engine will come mated to a revised 7-speed dual-clutch transmission which will transfer the power to all the four wheels.

As aforementioned, the Chiron will be unveiled at the 2016 Geneva Motor Show which is scheduled in February 2016. About the price, as one of our colleagues mentioned in an earlier report, “if you have to ask, you can’t afford”.