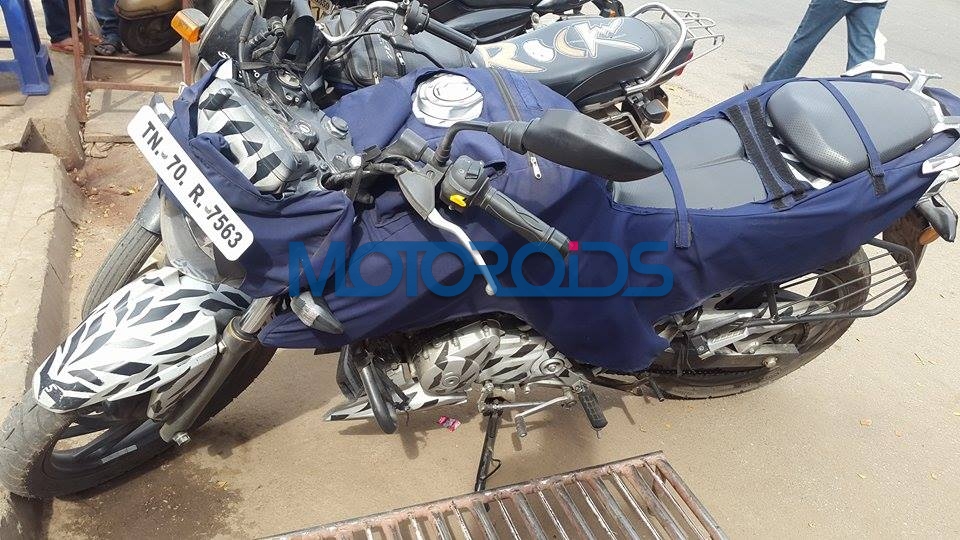 Motoroids has been at the forefront of feeding you in with a whole bundle of spy images and details about the upcoming TVS Apache 200. Only today we shared a fresh set of images with you detailing the twisted bar and clip-on handlebars on the motorcycle, along with a whole bunch of other exclusive details.Now, the Indian motorcycle maker has announced the launch of its ‘new offerings’ on the 20th of January. With the Apache 200 doing the test rounds in near production ready guise, we are quite sure that the bike is finally hitting the showrooms on the said date.

Read : Here’s why the TVS Apache 200 can be a real winner

The 2016 TVS Apache RTR 200 is expected to be powered by a 200cc single-cylinder four-valve air/oil cooled engine. The power plant is nestled into a double cradle frame where the engine is a load-bearing member. A sharp under cowl is instated in order to protect the engine from kicked up debris. The power figures of the bike will be close to 25bhp while the torque will be rated at around 22Nm. The power will be pushed to the wheels by a 5-speed transmission. Cooling system on the bike is said to be sourced from BMW.

Read: The upcoming TVS Apache RTR 200 spied yet again, this time in Bangalore/Coimbatore

At Motoroids, we will be covering the launch event live on the morning of 20th January, followed by a media ride session the next day. We will be bringing you all the relevant updates from the launch and ride event live – stay tuned!