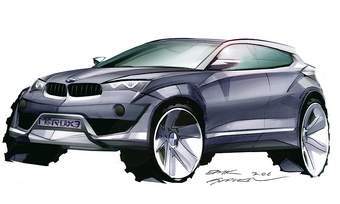 Premium automakers are hell bent on designing and manufacturing SUVs and crossovers of every perceivable shape and size, give it a fancy name and try and distinguish it from the others to boost their sales. Just have a look at BMW’s SUV line-up – X1, X3, X5, X6 and now the company seems to have decided to shove in another model in the lineup-the X4. As the name suggests, the new SUV will try to fit in somewhere between the X3 and the X5.

So how would the X4 be different from the rest of the lineup? Well, we guess BMW will try to give a very distinctive face to the X4 for starters. Secondly, the X4 may just turn out to be a mini-me version of the bigger and more expensive X6. With a coupe like roofline and other idiosyncrasies associated with the X6, the X4 may just present itself as a stylish, lifestyle crossover for those who prefer form to function.

Expect the new car to share its underpinning and engines with the recently introduced X3. Pricing would again be somewhere between the X3 and X5.