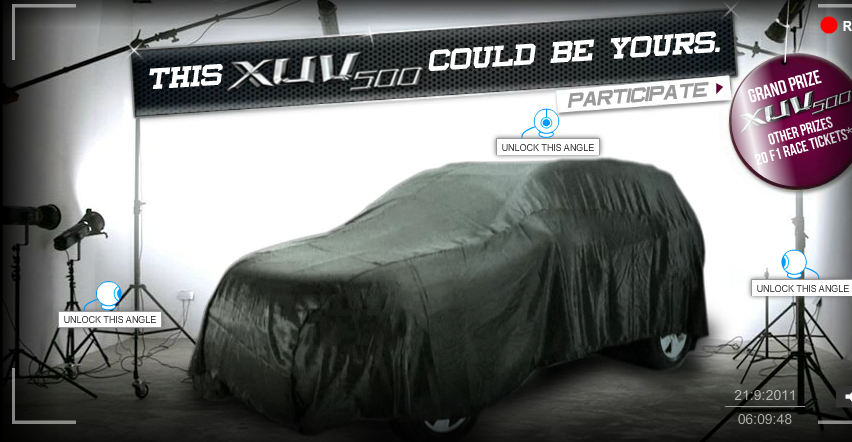 After officially launching the teaser website for their new XUV500 SUV, Mahindra & Mahindra have now sent out official invites to the automotive media for the launch of the car. September 28th, however will only witness the unveiling of the car. The price, strategy and technology behind the vehicle will be announced on the 29th of September, the day when the media will be given a chance to drive the new SUV as well.
In the meantime, Mahindra have revealed another image of one of the parts of their new SUV. The second teaser video for the car revealed today shows the alloy wheel of the car. The video shows Mr B Bhaumik, Senior Vice President, Product Development, Mahindra & Mahindra talking about the design and development of the new car. Here’ the image of the alloy wheel of the car as revealed by Mr Bhaumik.

Designed and developed entirely in-house by Mahindra, the XUV500 is Mahindra’s first global SUV platform, with significant inputs in styling and development from customers across the globe. The XUV500 is unlike any other Mahindra vehicle which has seen the light of the day. Four years in the making from conception to global testing, validation and final production, the XUV500 according to the Indian carmaker, is the embodiment of the Group’s automotive vision of providing the best world class products to its customers.

The XUV500 has been designed entirely in-house at M&M’s research and development facility, the Mahindra Research Valley at Chennai. It will be the country’s first indigenously developed monocoque SUV with the first transverse engine offering from Mahindra.

Making the XUV500 truly unique and global is the manner in which it was conceived and designed. In fact, all research & development activities for this global SUV were aligned with global standards of quality, technology, testing norms, regulations & emissions from the very start.

Rely on us to get all the information about the car to you as it is launched. We will be there to cover the event and bring you a test drive as well.