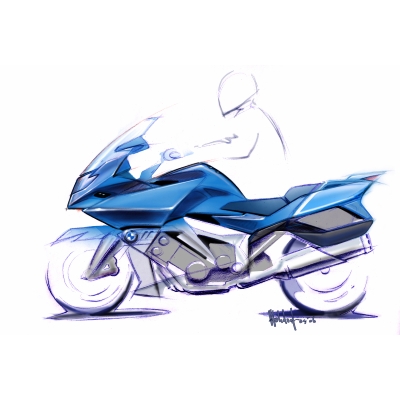 BMW has announced its Honda Goldwing rivaling tourer – the K1600GT. The bike will boast a monstrous 1.6-litre straight six engine with more than 160bhp of power and 175Nm of torque. Equipment will comprise of car-like cruise control, heated seats and grips. But the big news is its world’s first adaptive headlight, which facilitates the auto adjustment of the beam not just on the banks, but also under heavy braking and acceleration as well. Read this press release to know more about the luxuries and wizardries incorporated in this car on two wheels…

Since BMW Motorrad presented the concept study Concept 6 in autumn 2009, the six-cylinder in-line engine featured in it has captured the imagination of many motorcycle fans. With BMW, six-cylinder in-line engines have stood for fascinating engine technology in automobiles for over seven decades, in a way which is unique among brands. In the near future, BMW motorcycles will also be available with an internally developed six-cylinder in-line engine.
With the BMW K 1600 GT and the BMW K 1600 GTL, BMW Motorrad is penetrating a whole new dimension in the Touring world of experience . Both motorcycles stand for a supreme, impressive and equally distinctive appearance, arousing a desire to travel at first sight.
This press release contains a range of information on all aspects of BMW Motorrad’s new touring bikes. Additional data and background information will be added for the world premiere.

Riding dynamics, long-distance suitability and comfort.
For decades, six-cylinder in-line engines have offered a special fascination. In addition to their perfect running smoothness they also offer supreme output and torque, giving the rider powerful emotional impressions, too. And of course the sound of a six-cylinder engine is beyond compare.
In addition to safety, equipment and prestige, the key criteria for a supreme touring bike are comfort and dynamics. With the most compact in-line six-cylinder engine in serial motorcycle production to date, the K 1600 GT and the K 1600 GTL penetrate a whole new dimension in terms of riding properties, long-distance suitability and comfort. They combine maximum agility and riding dynamics with a luxurious overall package. With an engine output of 118 kW (160 bhp) and a maximum torque of approx. 175 newton metres, their six-cylinder engine provides superb propulsion in all conditions.

BMW K 1600 GT with active riding ergonomics for proactive touring.
The dynamic touring bike BMW K 1600 GT is characterised by an active seating position which nonetheless offers a high level of long-distance comfort. The reason for this is the favourable set-up of the ergonomics triangle made up of footrests, seat and handlebars. The K 1600 GT has a very extensive range of standard features ex works consisting of xenon (HID) headlight, heated grips and seat, cruise control and on-board computer. These features in conjunction with the supreme riding qualities of the new BMW Motorrad six-cylinder engine leave nothing to be desired for the proactive tour rider.

BMW K 1600 GTL with very comfortable, relaxed ergonomics set-up for long trips with pillion passenger.
The luxurious touring bike BMW K 1600 GTL meets the highest demands. Rider and pillion passenger benefit from the relaxed, upright seating position as is especially appreciated over long distances. The ergonomics design is geared towards even further enhanced comfort and derives from a two-level seat in conjunction with rider footrests which are positioned further forward and lower down, as well as handlebars which reach further back. The standard topcase rounds off the range of comfort features for the pillion passenger. Like the K 1600 GT, the K 1600 GTL has a very extensive range of standard features consisting of xenon headlight, heated grips and seat, cruise control and on-board computer. The overall impression of this fascinating six-cylinder motorcycle with a carefully conceived storage concept, audio system as standard and numerous design elements make the BMW K 1600 GTL the flagship among BMW touring bikes.

Page 1 of 2 . Go to the next page for all the features on the bike in Bullet listm and image gallery