Home Bentley Bentley aims to make its SUV the fastest ever

Luxury car maker, Bentley, has been rigorously testing its upcoming SUV in real life conditions. Bentley targets to make the upcoming SUV not only luxurious, but also the most powerful one. Now, Bentley’s sales and marketing director, Kevin Rose, has also confirmed that one of the objectives is to make the W-12 iteration, the “fastest SUV on sale”. 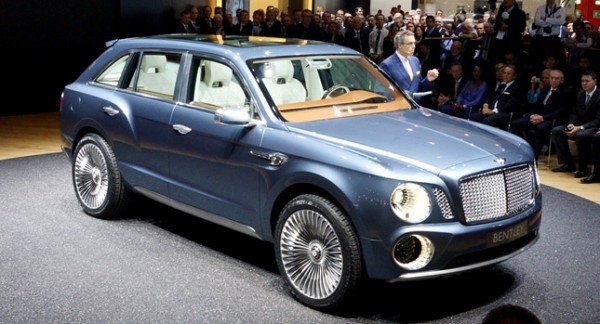 Previous reports have indicated that this upcoming Bentley will get powermill options comprising of V-8, V-8 plug-in hybrid, and W-12 versions. Bentley is still in discussion on whether to introduce an diesel engine. The diesel unit would be a Bentley version of Audi’s 4.2-litre V8TDI engine which will also make make way in the next Porsche Cayenne.

But interestingly, it’s not the most powerful diesel model, but the hybrid model that has grabbed attention of the audience as nearly 30 percent of potential buyers said that it was the hybrid version they were most interested in during a recent round of market research.

In terms of looks, the upcoming SUV will likely borrow its design ideas from the Continental GT and Flying Spur which will probably be mixed with concept’s styling. Hopefully, the SUV will not retain many things from the much criticised concept.

In terms of pricing, as previously reported, Bentley’s boss Wolfgang Dürheimer confirmed that the price tag for the upcoming SUV will be above £130,000.

What do you think of the Bentley’s upcoming SUV. Share your thoughts through comments below. Do stay tuned into Motoroids for more updates from the world of auto.