The Bajaj V15 hit all the right strings to stand out from the existing crop of 150cc motorcycles. The patriotic value that it carried by using the scrapped metal from the Indian Navy’s now decommissioned and dismantled aircraft carrier, INS Vikrant, made it the talk of the town. It found  its way into the Indian households in a manner which called for an applause for Bajaj’s marketing team.

Bajaj has always had a strategy wherein it placed multiple products in a variety of segments to grab a major chunk of that space. The sub-500cc segment, for example, is led by the Dominar 400, 390 Duke and the RC390 – all three technically being products of the Bajaj group. The 200cc segment is dominated by the KTM 200 Duke, the RC200, the Pulsar RS200, the Pulsar AS200 and the Pulsar NS200. The 150cc segment is represented by the Discover 150, Pulsar 150 and the V15. The 125cc segment, however, had a void as only the Discover 125 has been representing the brand against the likes of Honda CB Shine, Hero Super Splendor and others. So the V12, as you would’ve guessed, would be sold alongside the Discover 125. 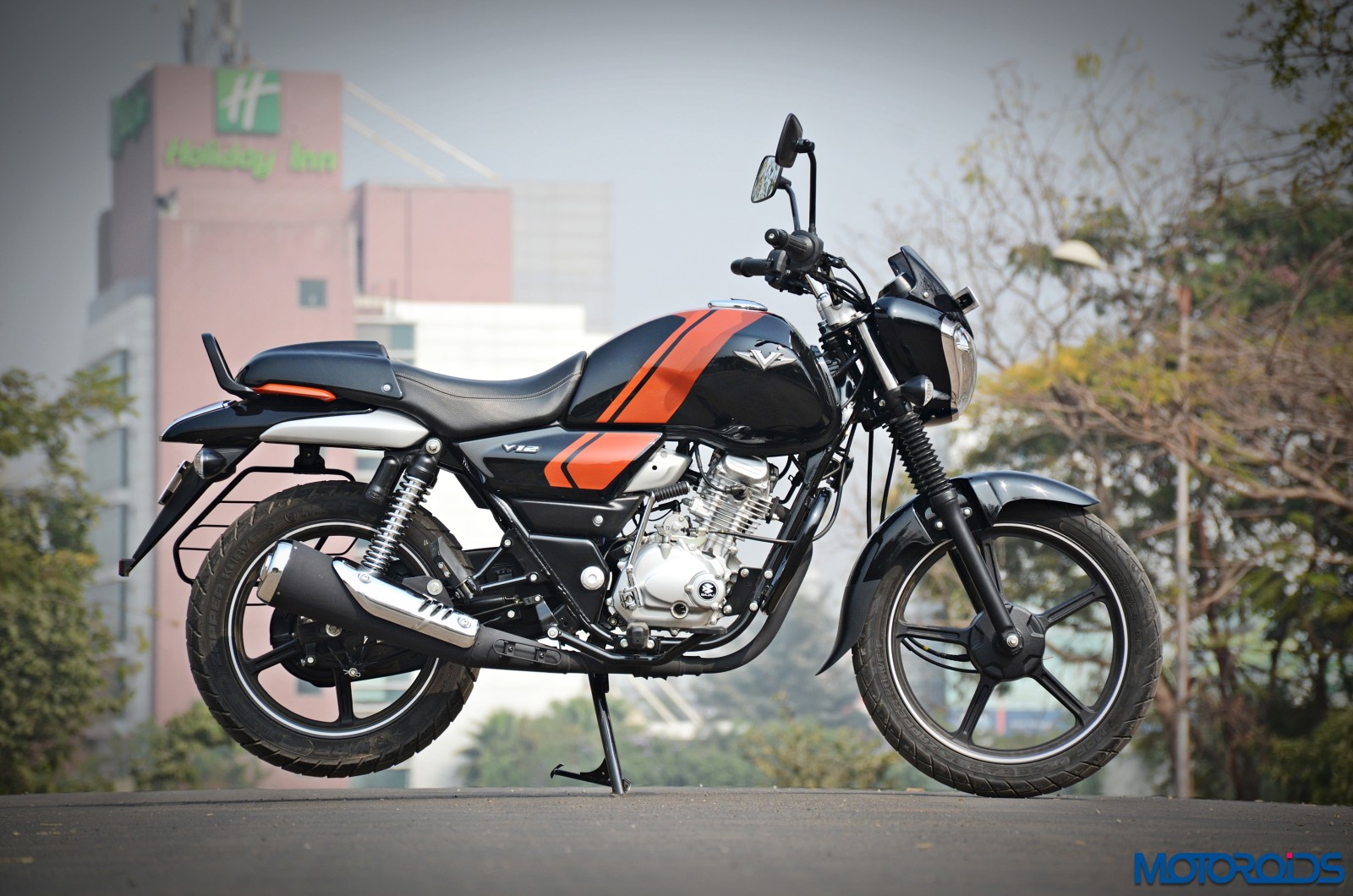 Just like the V15, the V12 is more than just an everyday commuter. The motorcycle stands out from the current crop of 125cc motorcycles with its own unique traits. It carries a near identical design as the V15, but with a few tweaks to cut down cost. Moreover, the long stroke engine has apparently been refined for reduced vibrations and a better ride quality. But before we get to the performance bit, let’s check out what’s new, visually, on the new V12.

Visually, there are very few elements which differentiate the V12 from the V15. So you’d continue to see the elongated headlamp with a chrome lining and a black windscreen, the same 13-litre fuel tank and the removable pillion seat cowl that was first seen on the V15. It’s even built around the same chassis. 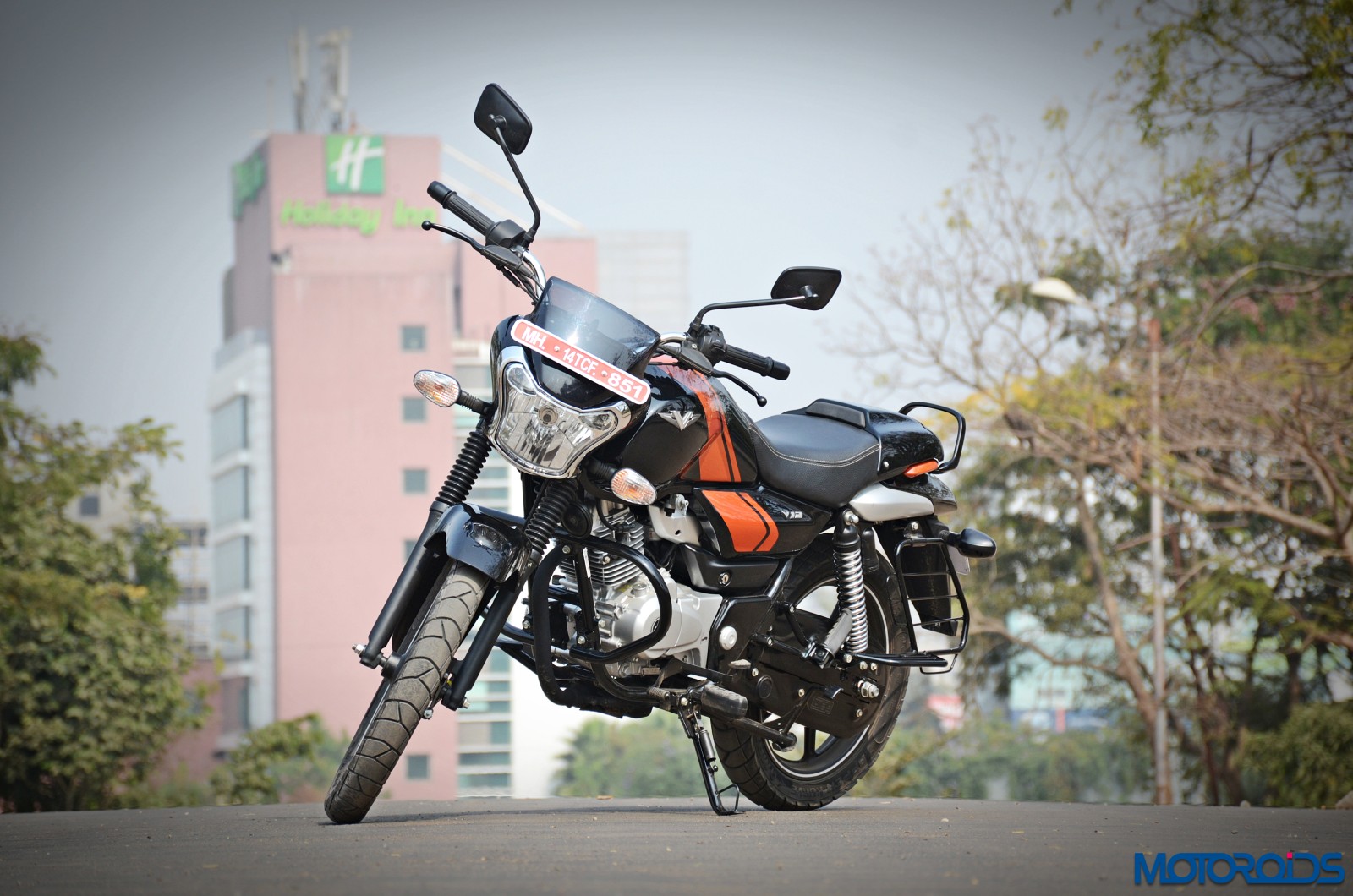 But while the overall design remains identical to the V15, the V12 does witness a few smartly executed cost cutting moves. The wheels, for example, now feature a 5-Spoke design instead of the split 5×2 design on the V15. The tyres are slimmer too when compared to the V15 but they’re the biggest in the 125cc class. The 55/60W headlight has been replaced by a 35/35W unit on the V12. The front fender on the V12 is black painted instead of a body coloured unit which is seen on theV15. The telescopic forks upfront are slimmer too than the V15 (33mm vs 30mm).

Then there are bits which require thorough attention. The ring surrounding the keyhole, for example, is built of plastic instead of the aluminium unit on the V15. The pillion foot rest holder has been carved out of fabricated steel instead of all-aluminium unit from the 150cc executive commuter. The instrument cluster too sees some cost cutting measures with an analogue fuel gauge instead of a digital bar on the V15. But that’s about it with the cost cutting measures. 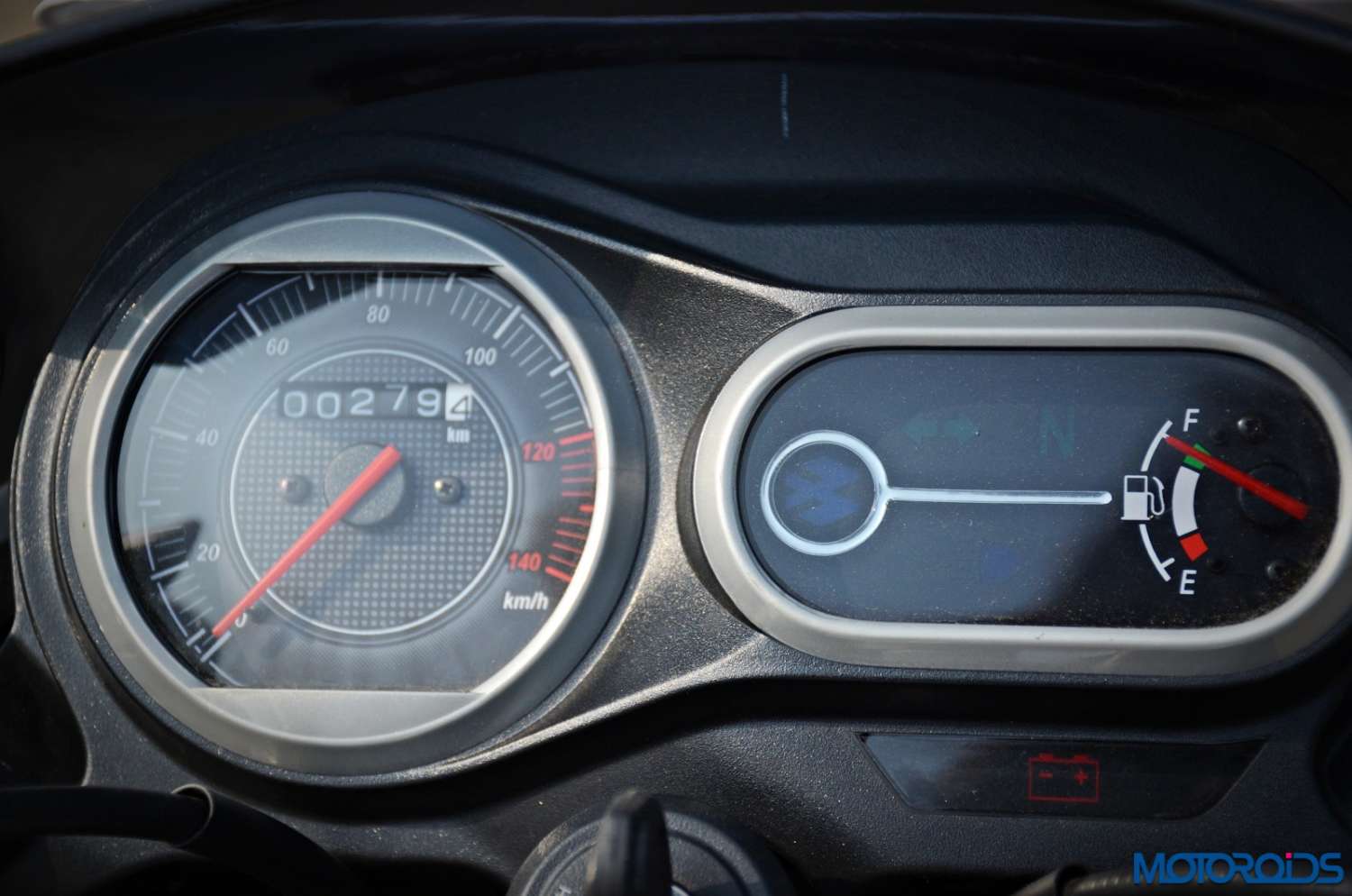 The build quality of the motorcycle is at par, if not slightly better, than many products in the segment. The paint quality, various V and V12 badges and chrome finish on various elements on the motorcycle is commendable. Then there is that slight change in the graphic. The stripe on the fuel tank, unlike the V15, neatly flows on the side panel unlike the offset design on the V15. The pillion grab rail is now standard too. The switchgear quality is at par with its rivals in the segment.

Bajaj has smartly cut down the cost without hampering the build quality and finish of the product and we must say that they’ve done a commendable job with the V12. With identical dimensions as the V15, the V12 gives you the look and feel of a 150cc motorcycle with the efficiency of a 125. But what about the performance from that smaller motor? 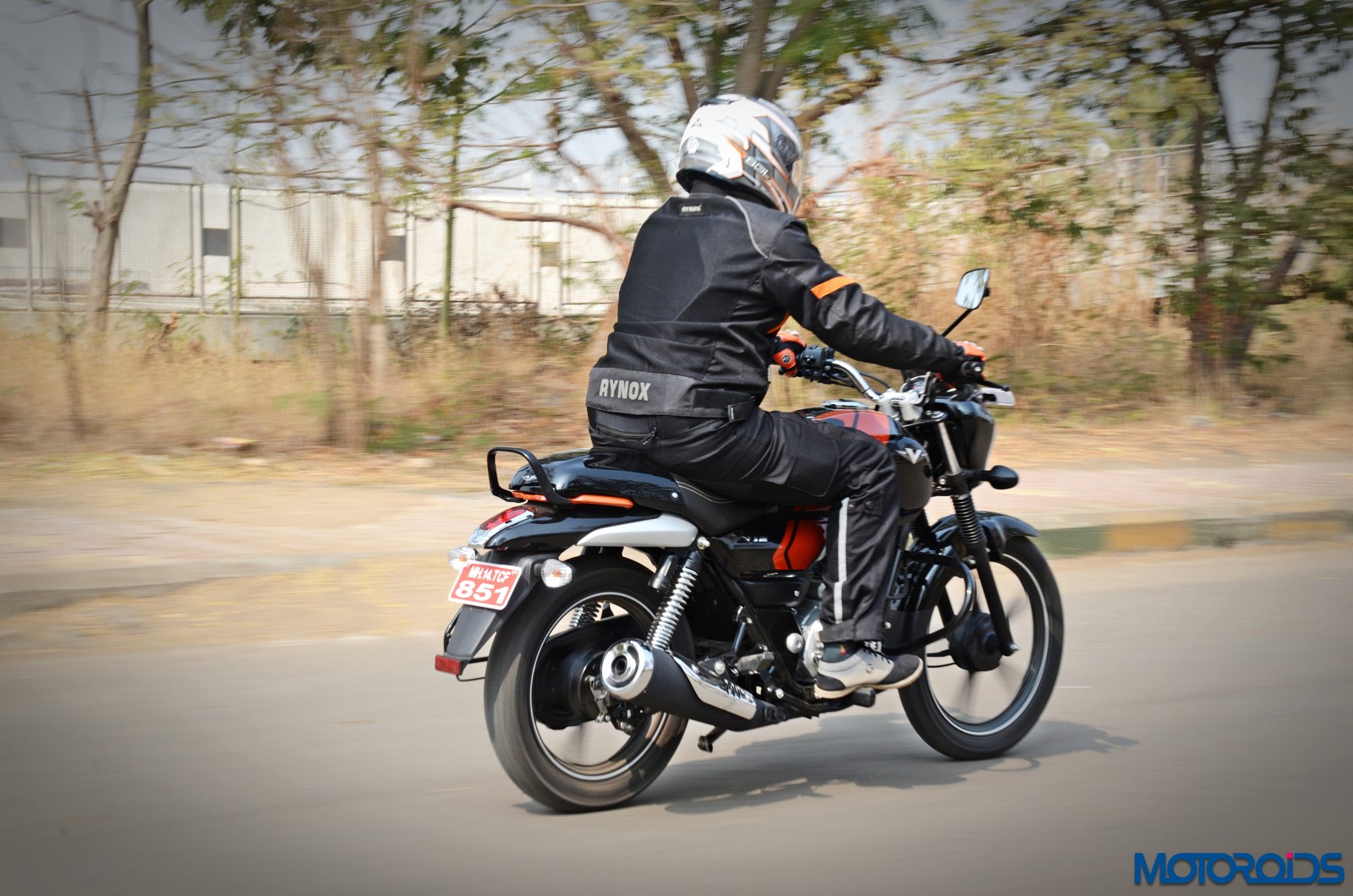 The new Bajaj V12 uses a 124.45cc air-cooled, single cylinder BS-IV compliant engine. It’s got an identical stroke (58.6mm) as the V15 and it’s also the longest in the 125cc segment. The engine puts out a healthy 10.7 PS of power @ 7500 rpm and a class leading 11Nm of torque at 5500 clicks. The V12 also benefits from a five-speed transmission instead of four-speed gearbox seen on other products in the segment. Moreover, Bajaj has taken a note of the complaints about the vibrations on the V15 and made necessary changes to the engine. They’ve also passed on those learnings on to the V12. So what you get is a near vibration free experience while riding the motorcycle. We’ll talk about that in a bit. Let’s talk about the engine character.

With the V15, Bajaj officials categorically told us not to expect the bike to impress in the higher rev-band. It was, however, not the same case with the V12. The V12, with ample torque in the low and mid rev range, offers a laid-back ride experience. But the top rev band isn’t bad either. It’s fairly quick for a 125cc motorcycle too and can cruise at speeds of upto 70 kph without much to complain. What would surprise you though is the way that engine pulls even after the 70 kph mark and you’d see the needle easily passing the 90 kph mark, before hitting a ton. The low end has decent spunk too. Engage the fifth gear and you can cruise comfortably, without any engine knocking even at 40 kph. 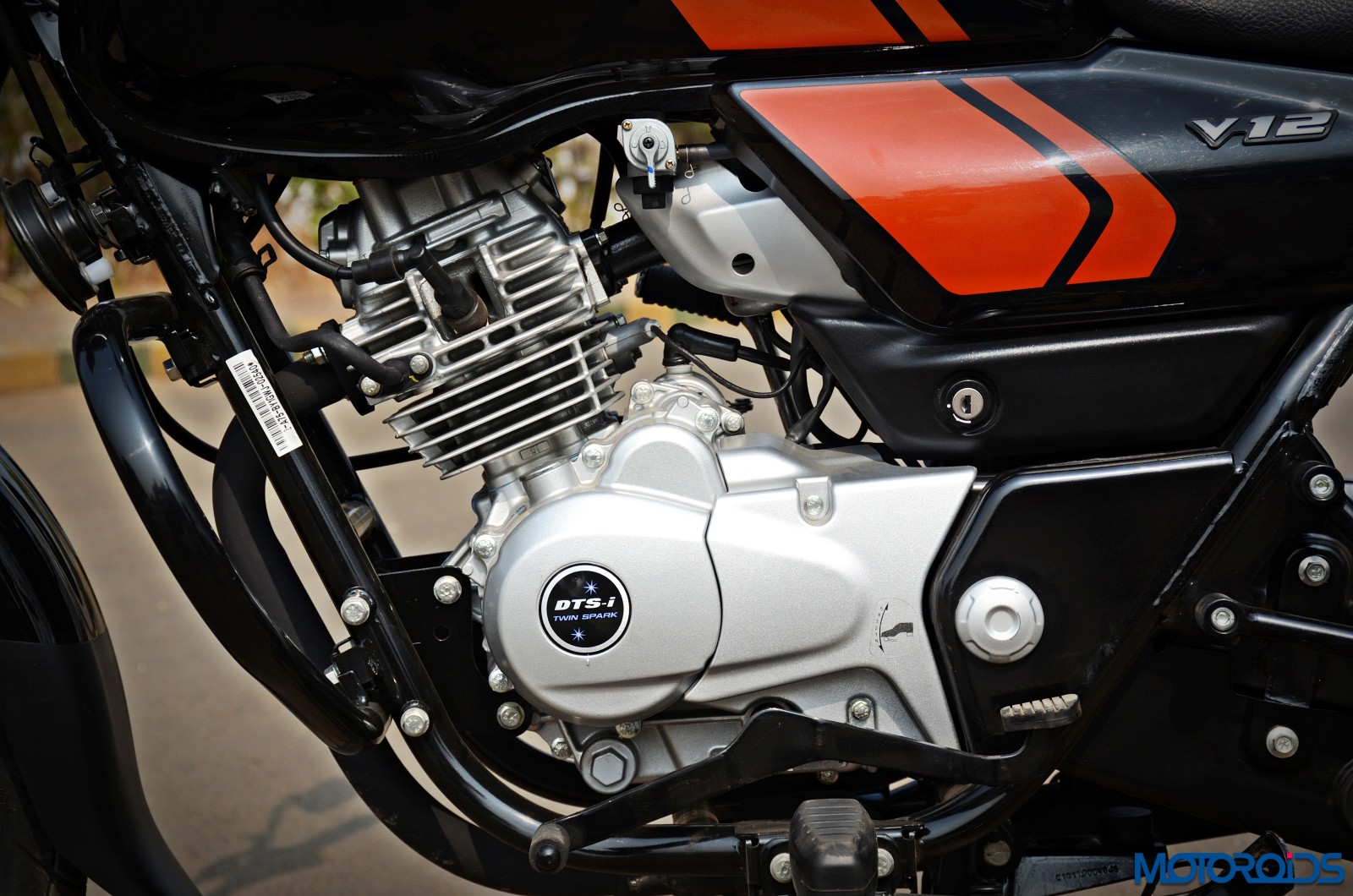 The top speeds achieved in all gears, as indicated by the speedo are provided below:

Here are the speeds and gears below which the engine shows some spluttering traits: 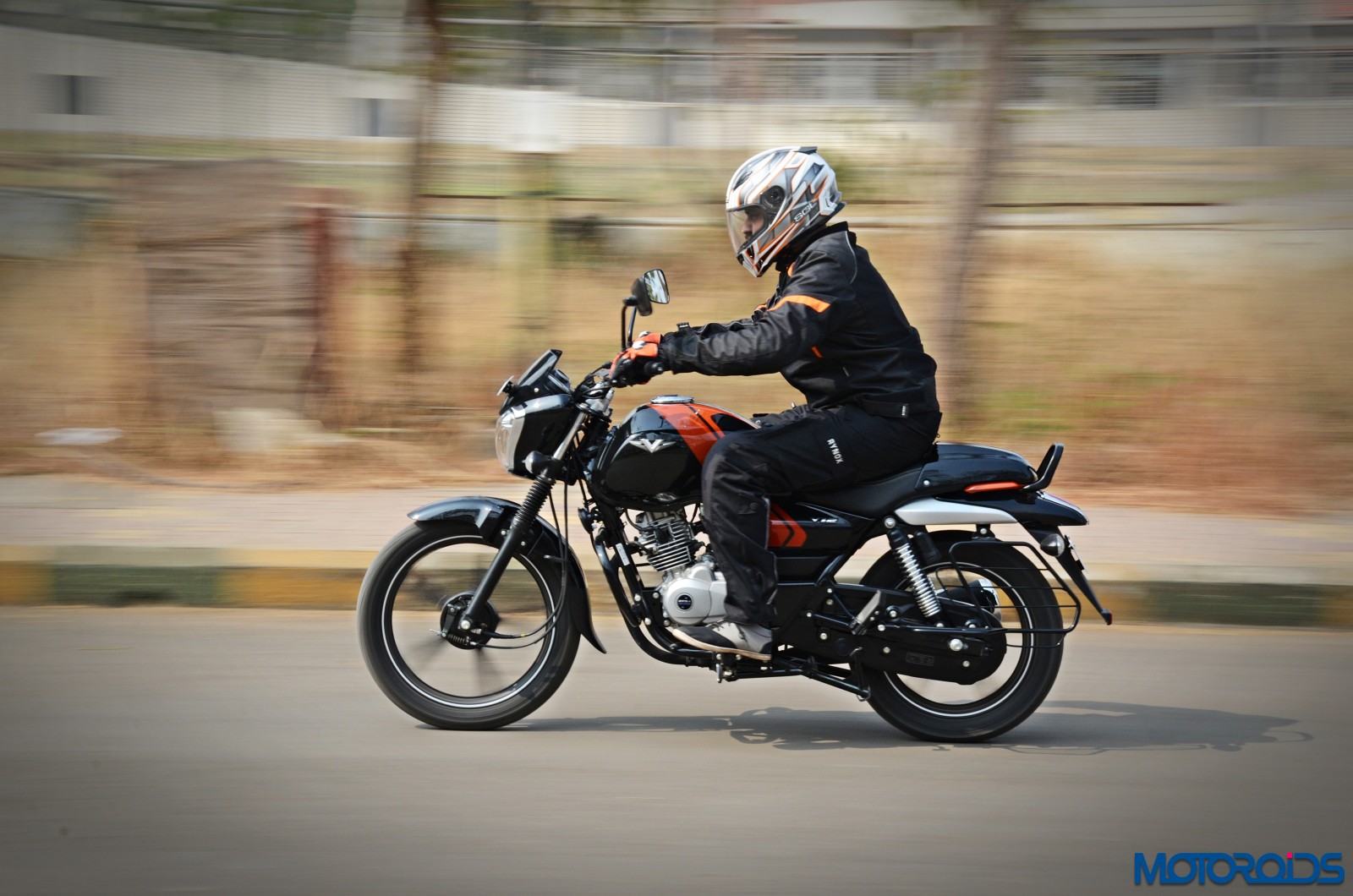 So to drive smoothly you’d have cruise in 3rd gear for speeds below 30 kph, in 4th gear below 40 kph and in 5th gear for anything north of 40 kph. The engine, as aforementioned, is pretty smooth till 80 kph mark post which there are very few, negligible vibrations creeping in from the footrests and under your loins. Nothing worth a worry here. 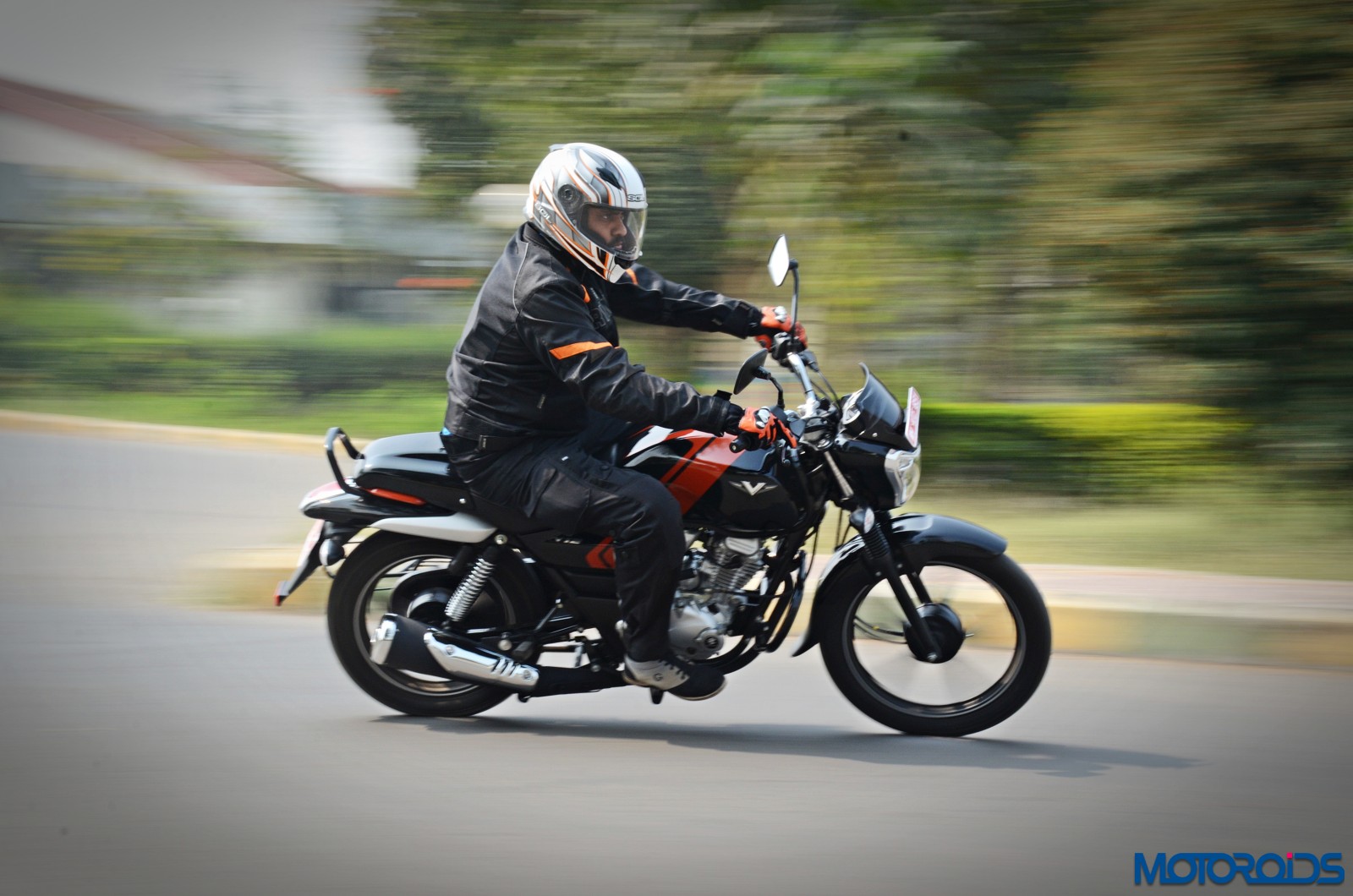 The V15 offered a typical commuter riding stance with its high raised handlebar and front set footrests and the V12 is no different. The riding position is upright and comfortable for everyday commutes. The seat height, at 780mm, makes the V12 accessible for all sorts of riders. The padding on the saddle is sufficiently comfortable.

The suspension is well tuned and you’d glide over any minor undulations on city roads without much stress. But while the suspension is tuned to be comfortable, it isn’t too soft and offers a nice balance. The setting also aids the handling department as one flicks through the traffic or goes a little too hot around the corners. The wheelbase, at 1,315 mm, is identical to the V15 and is longer than almost all of its rivals. But while the length slightly compromises the agility (by a miniscule margin), it offers good stability in a straight line. Further aiding the grip to the roads is the widest rear tyre in the segment which comes from MRF.

There aren’t many 125cc commuters out there that feature a disc brake upfront, at least as standard but not having one on a motorcycle with such promising engine was bit of a letdown. While the rear anchor were really good, the front didn’t inspire the confidence I would’ve desired. So even if not as standard, Bajaj should’ve offered a front disc brake as an option. 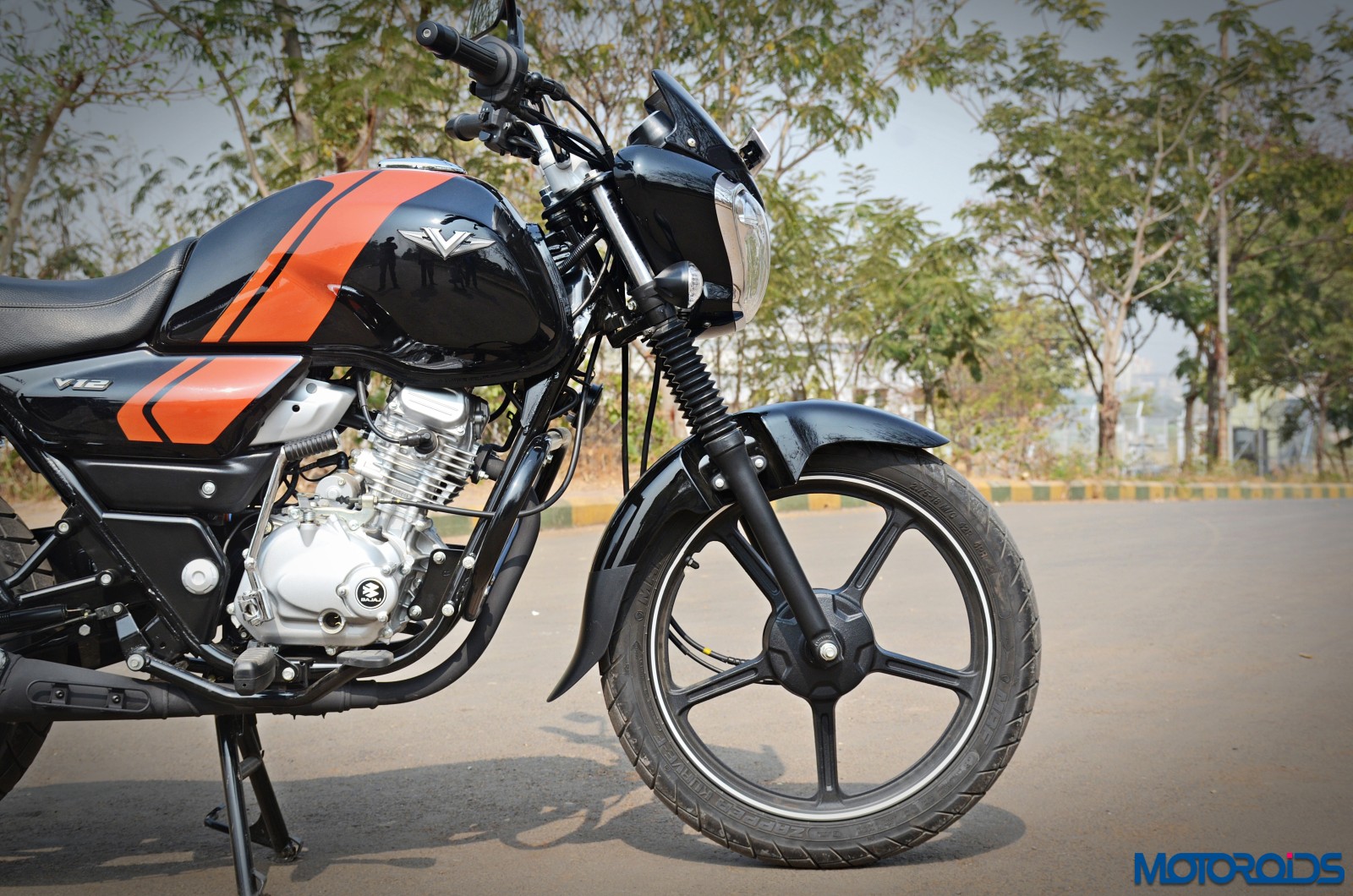 The V12 does everything that you’d want from a 125cc motorcycle. It would appeal to the young buyer who doesn’t want a vanilla commuter and is looking for a string visual differentiation. The fact that you’d own a speck of history with the inclusion of INS Vikrant’s metal is an USP in itself and has turned a big draw for the audience, as we’ve witnessed with the V15. 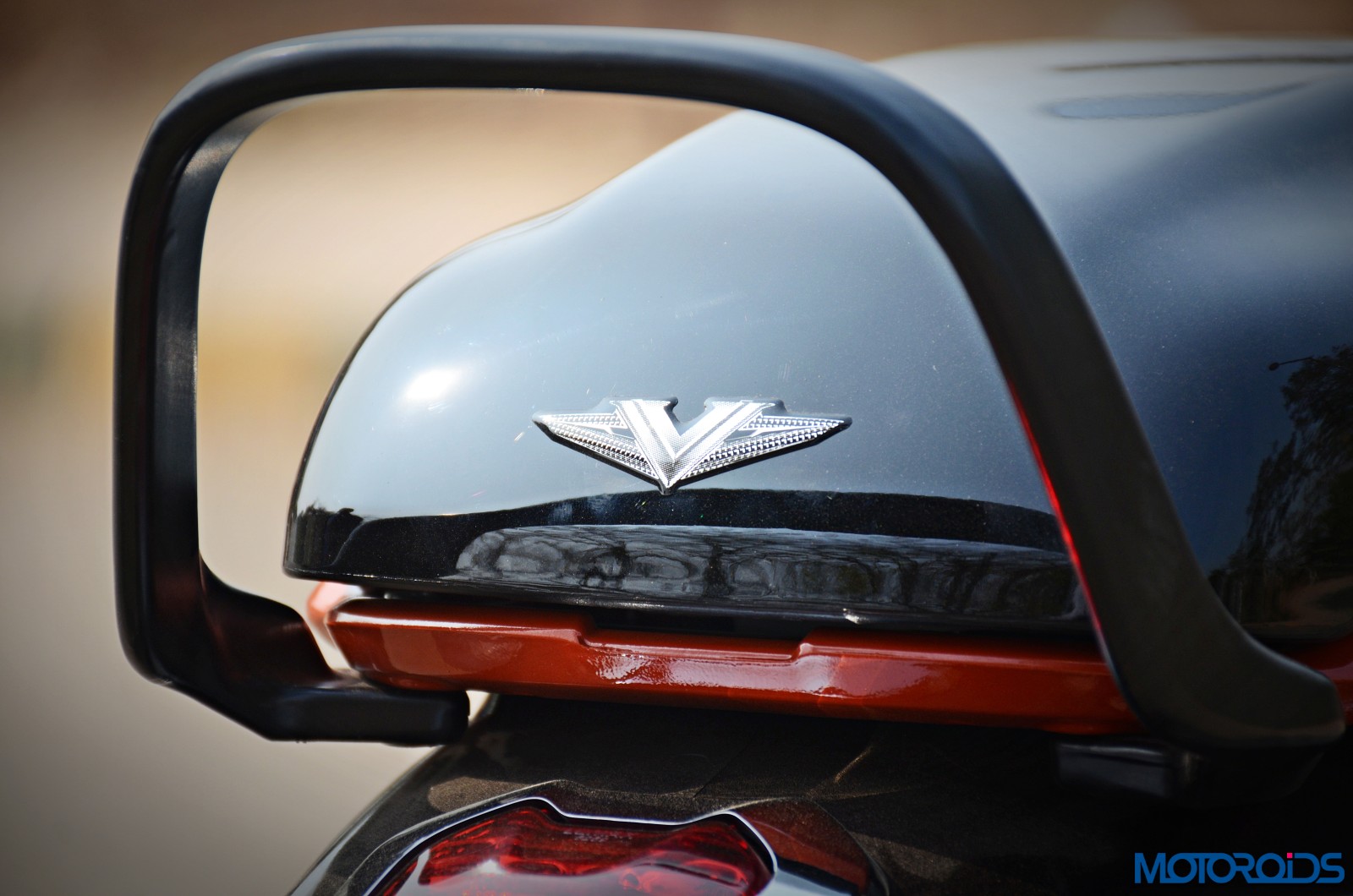 The V12 gets a grab rail as standard, unlike the V15, where it came separately as an accessory 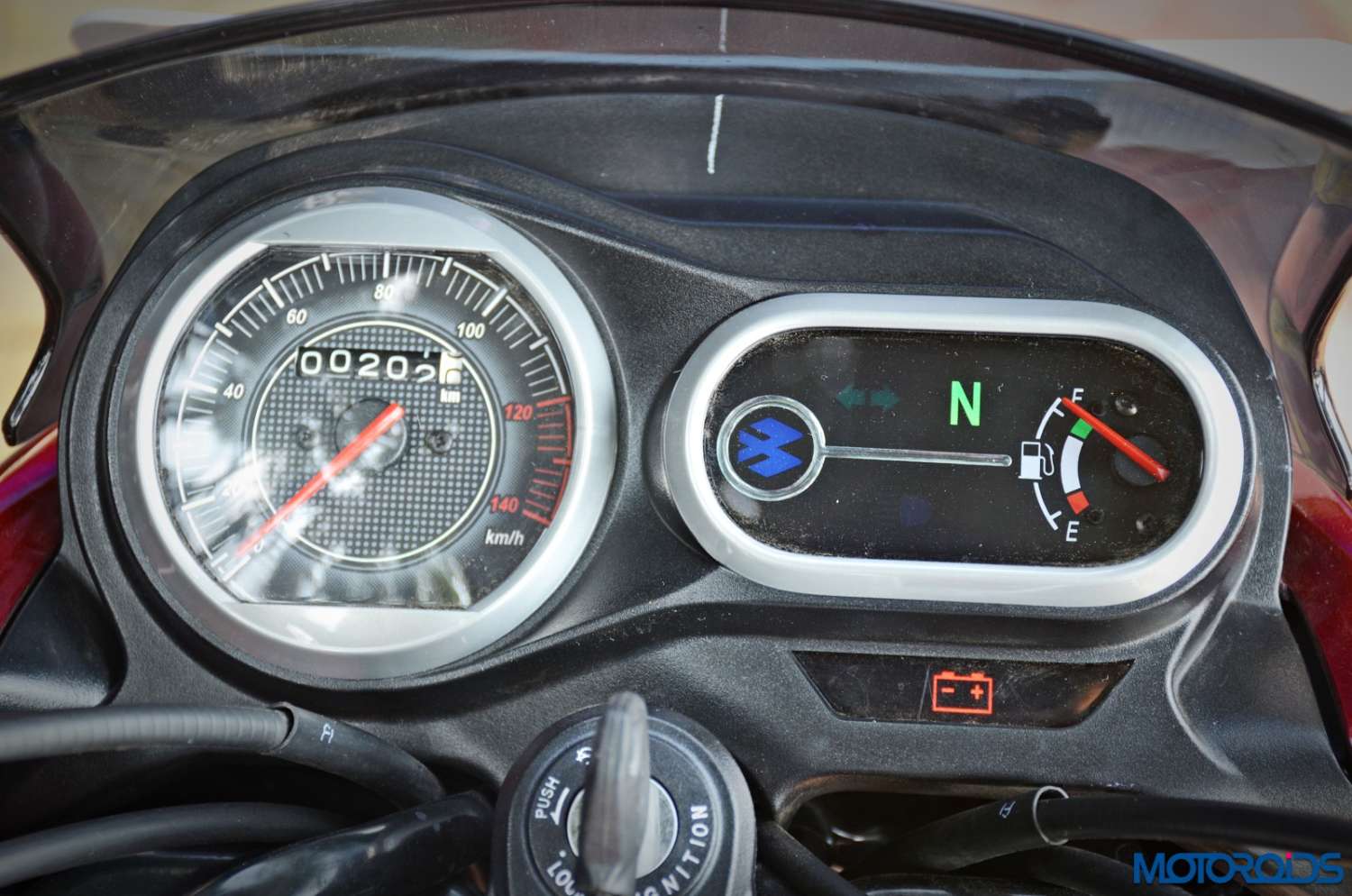 The only difference between the V15 and the V12 with regards instrument console is the fuel gauge, which is an analogue unit here. The V15 got a digital indicator with green bars. 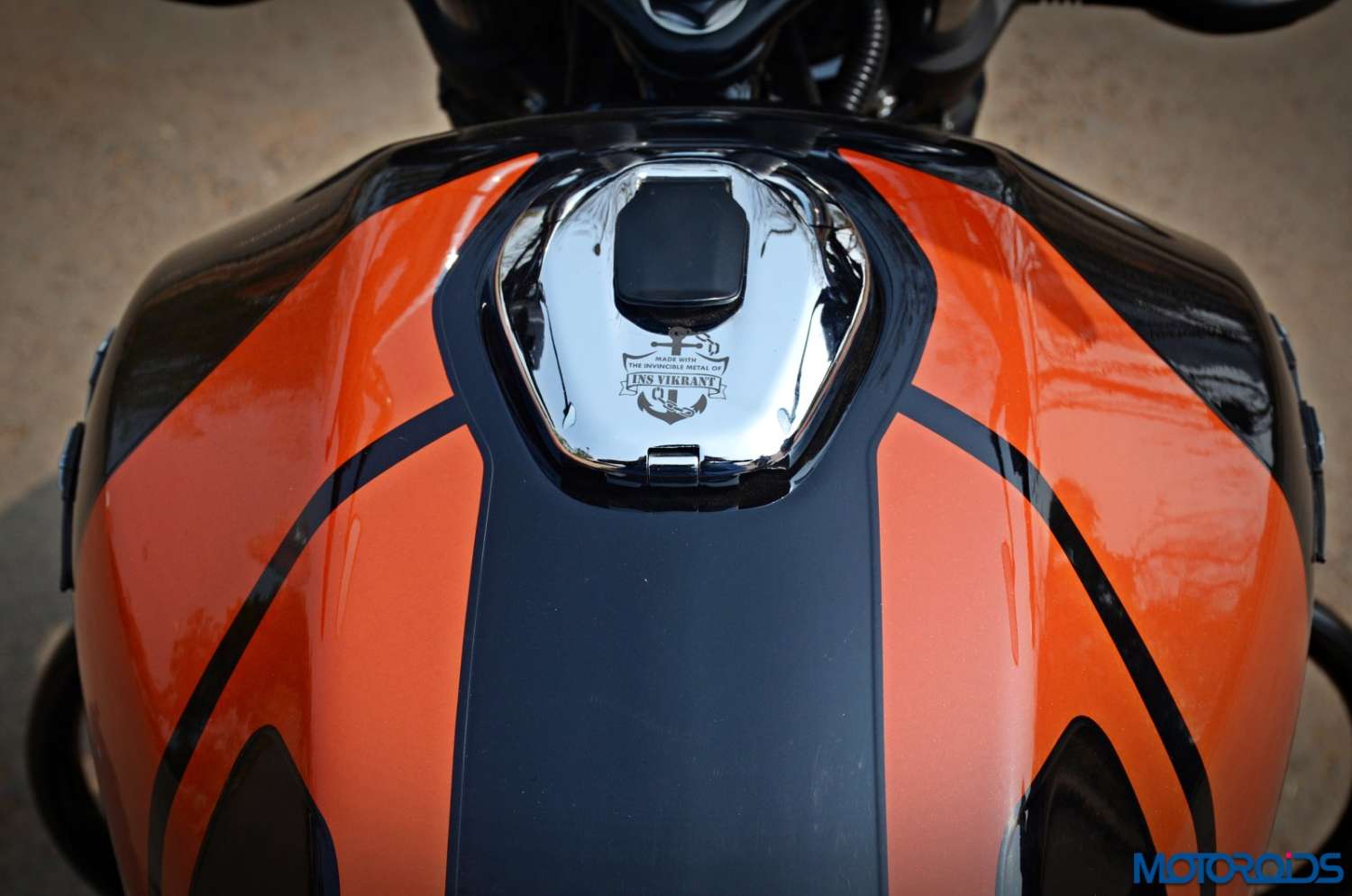 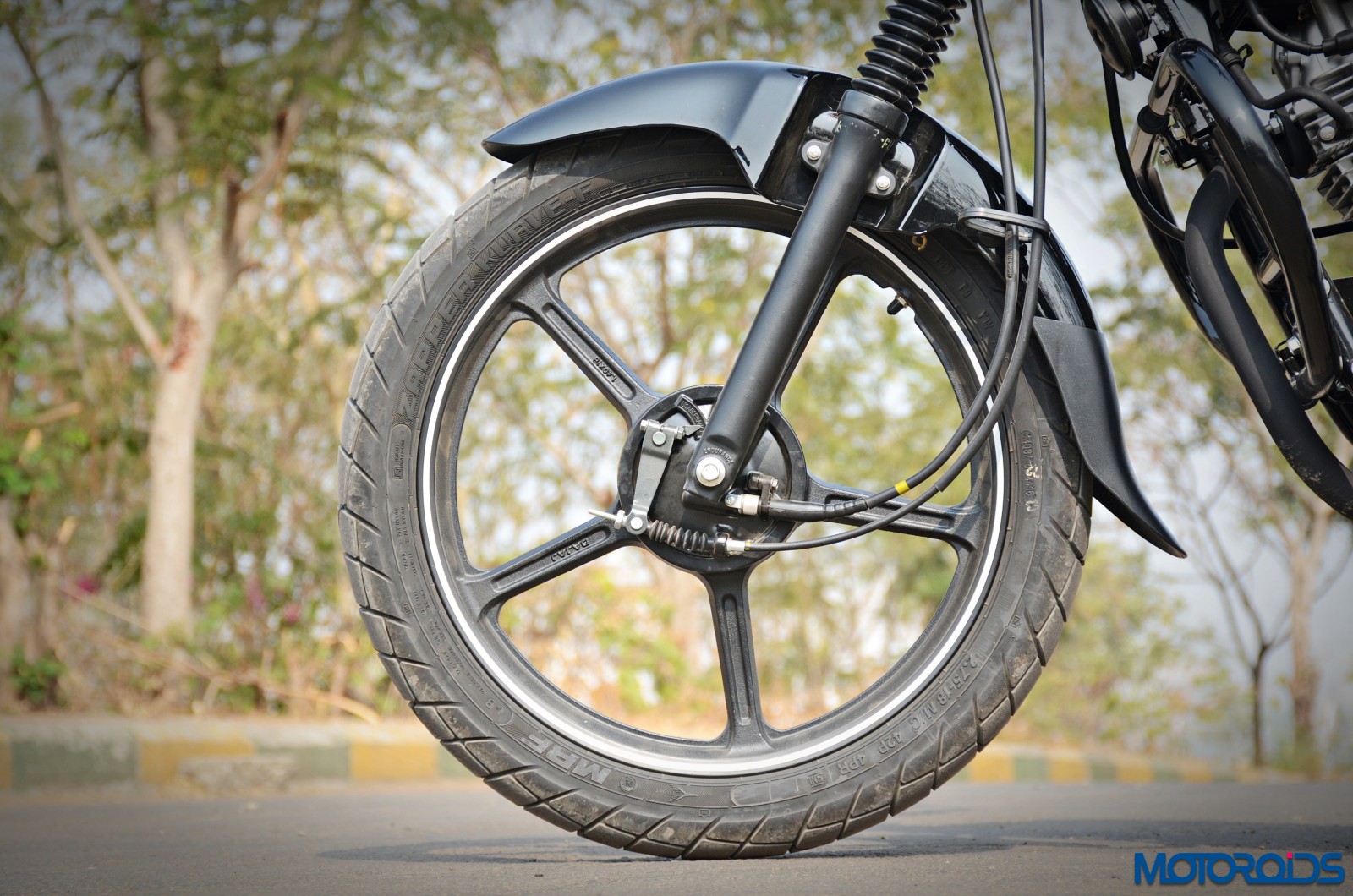 Front wheels are a simpler five spoke design, the forks have gone slimmer and there is no option for a disc brake. The tyre is narrower too. 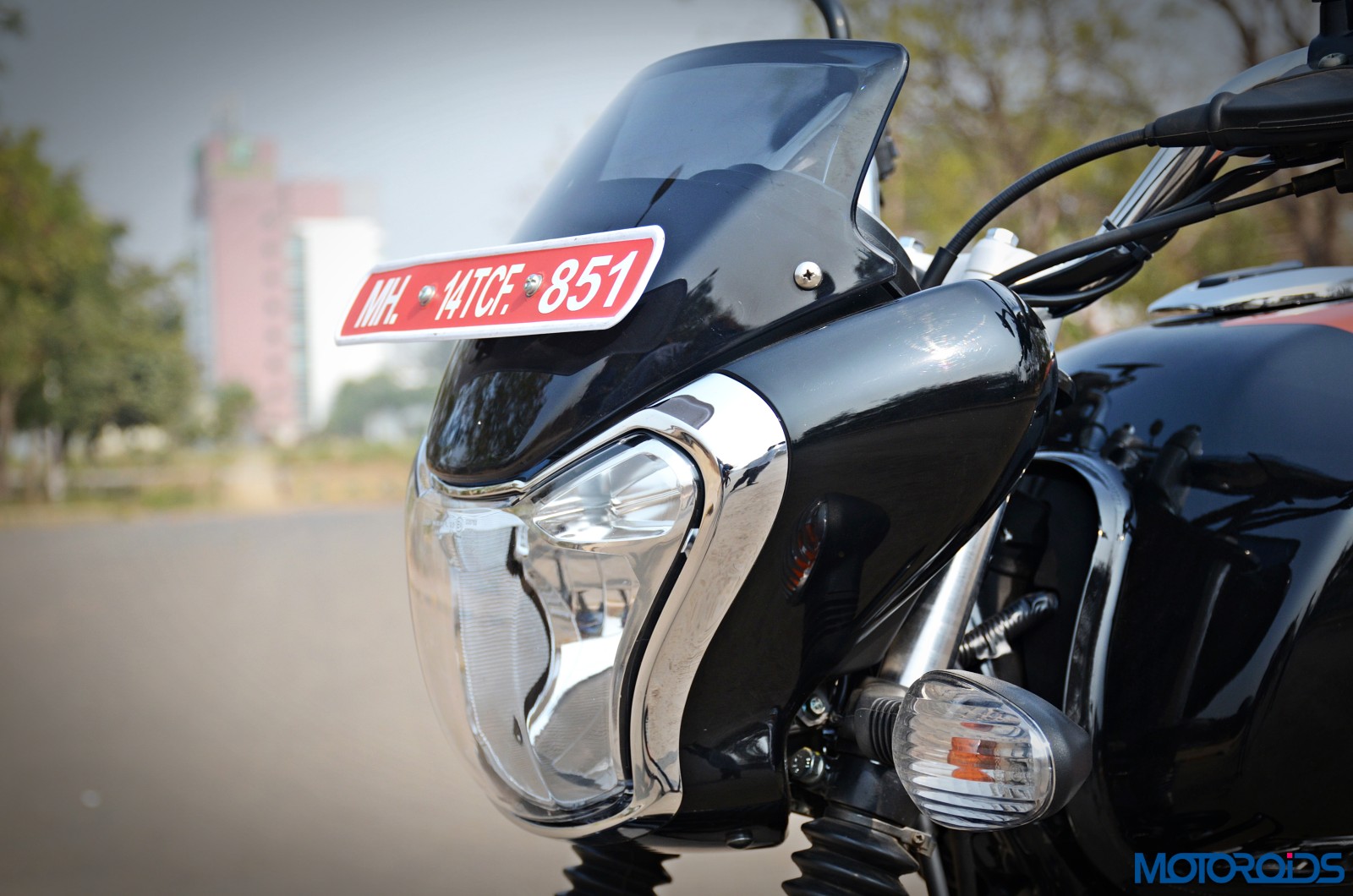 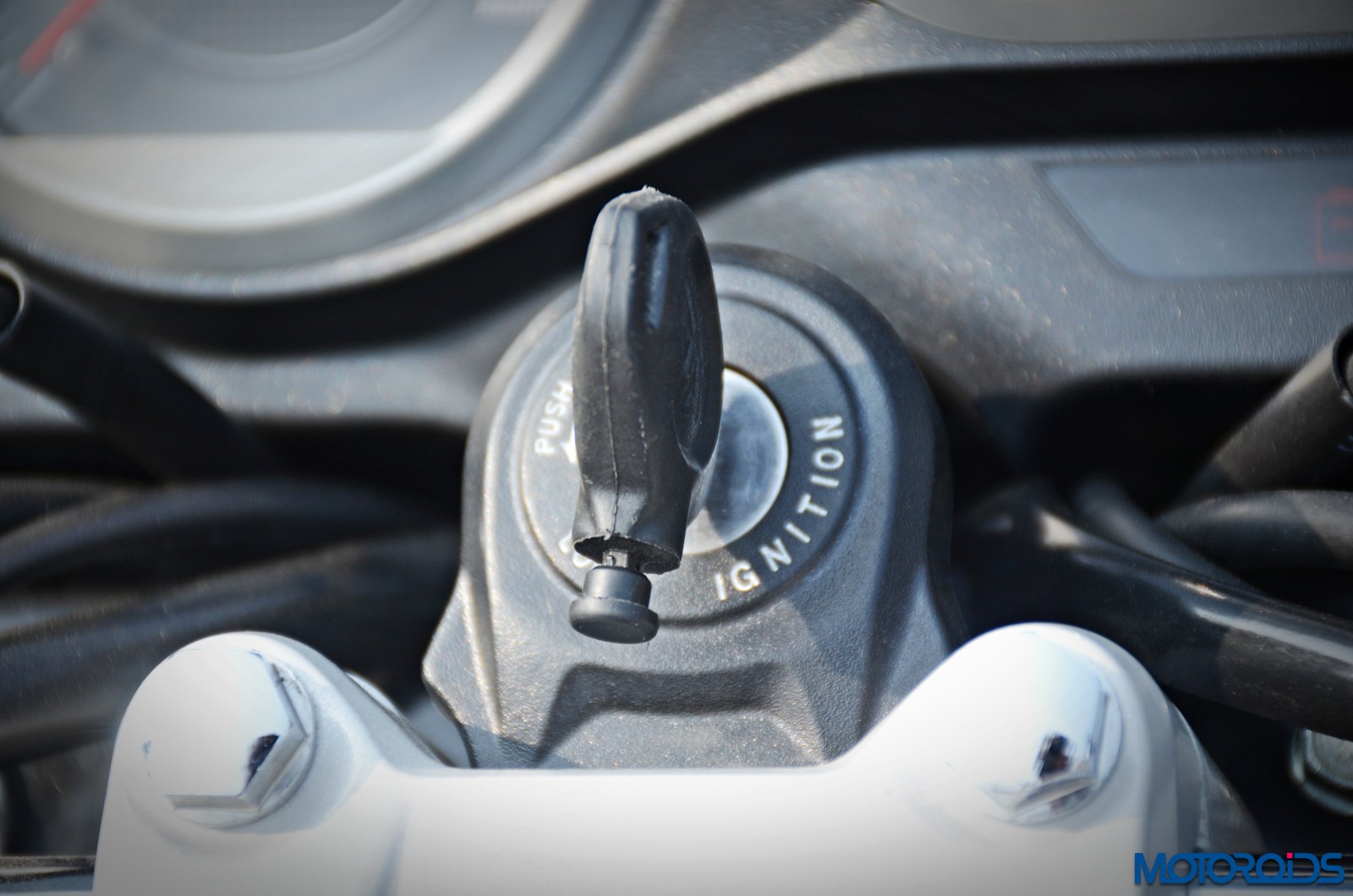 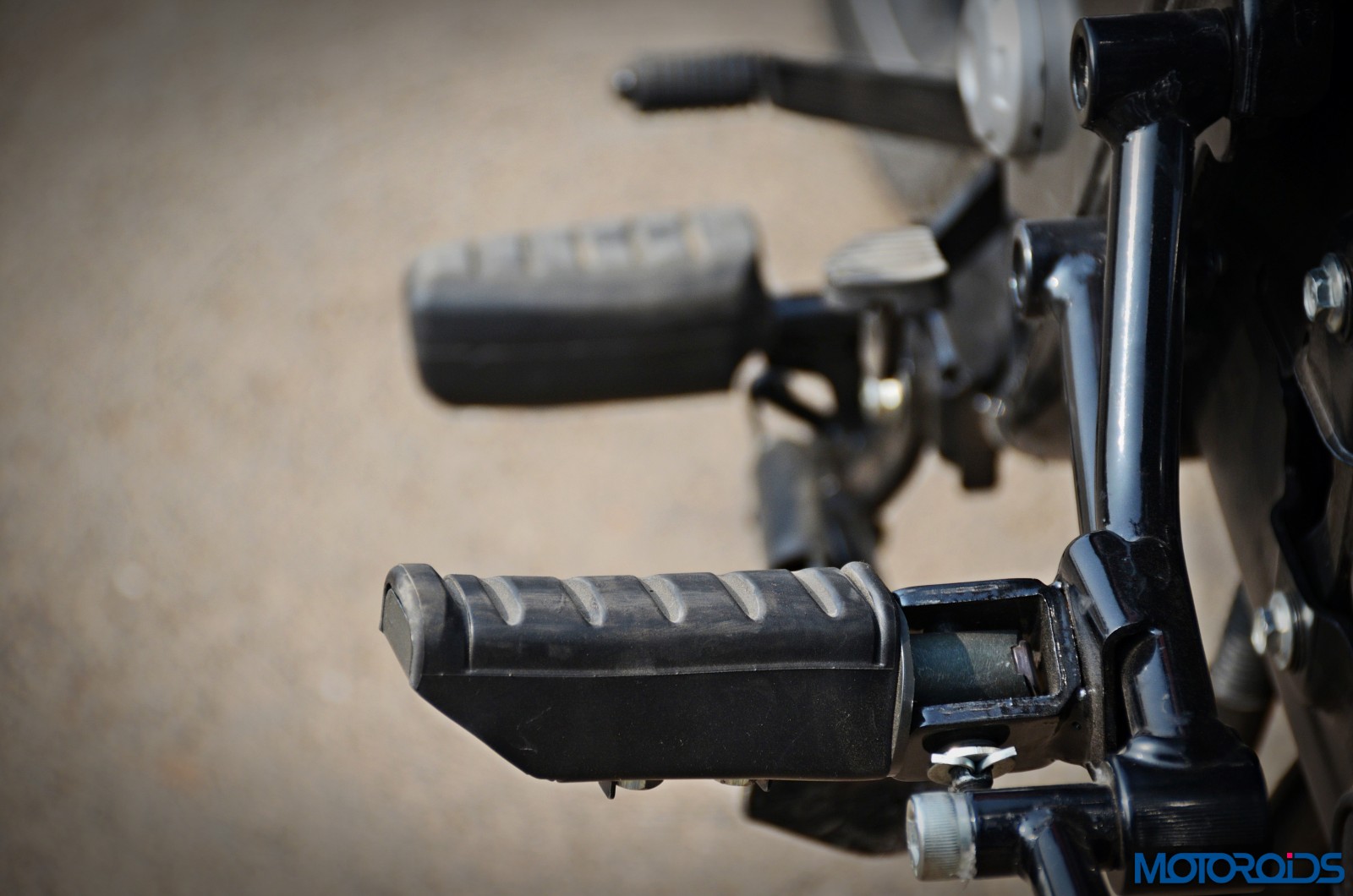 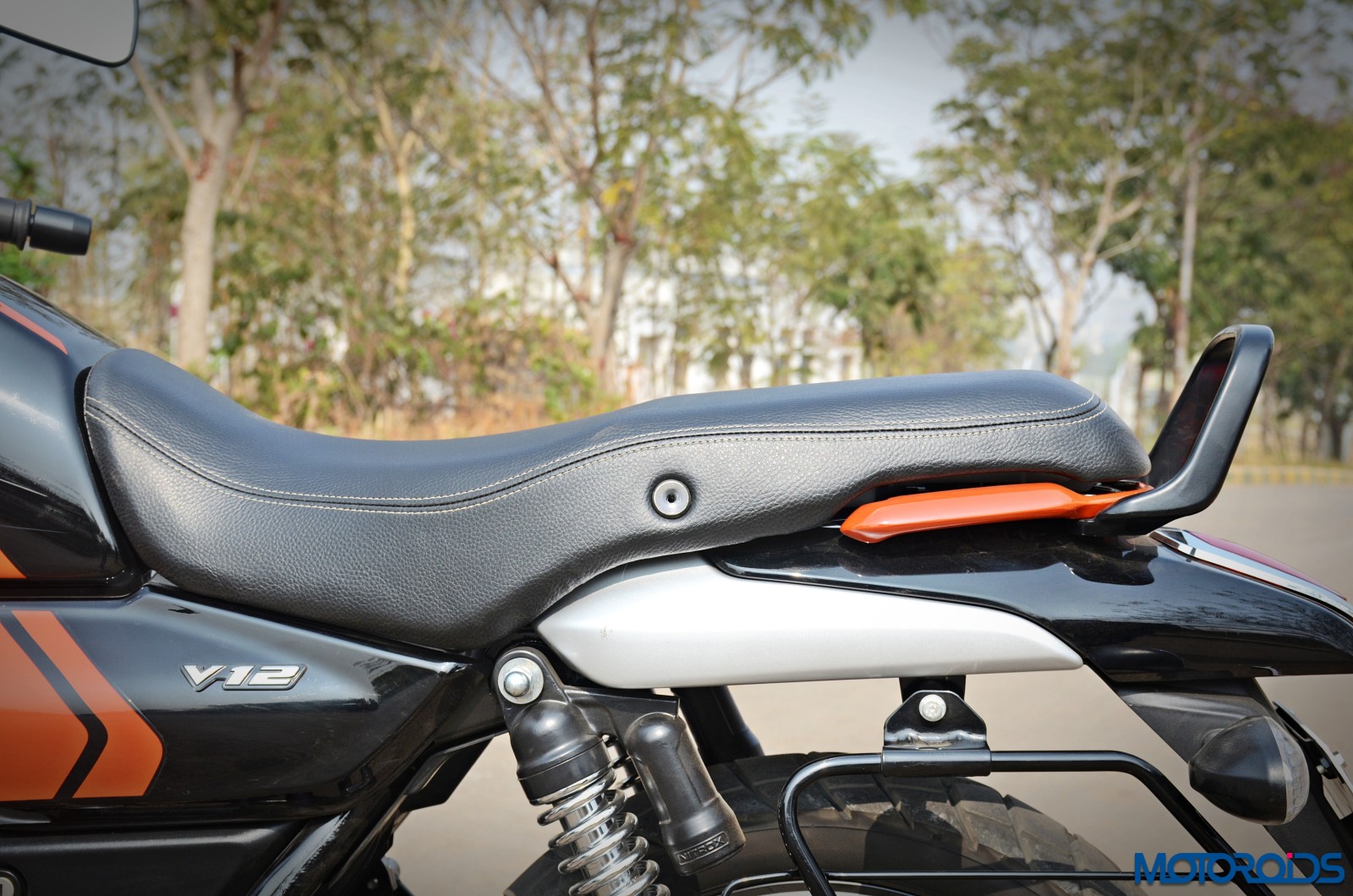 The seat is exactly the same as the bigger version of the bike. The graphics on the V15, though would be where you see the V12 badging here on the left 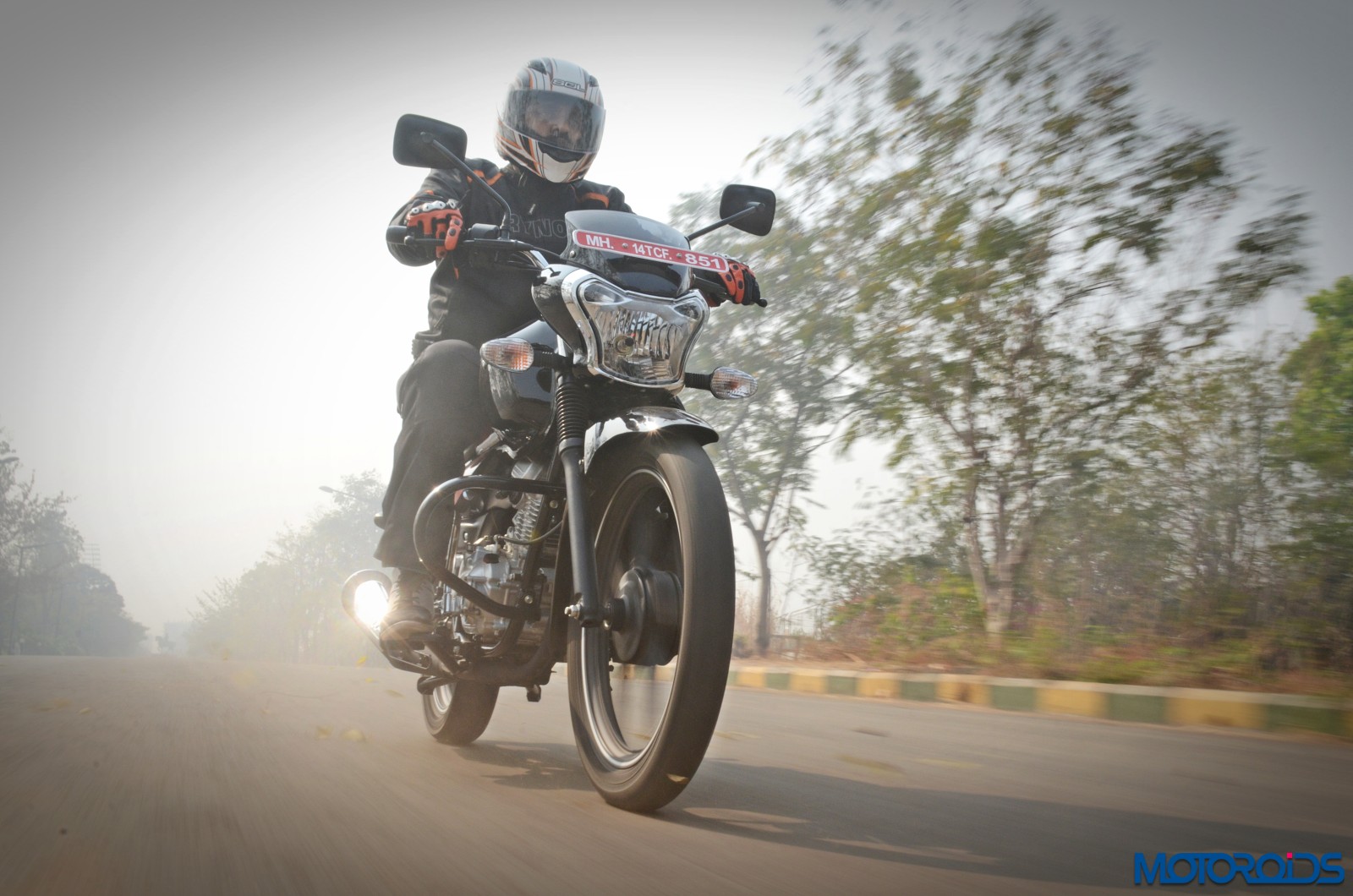 Who’d buy this motorcycle? The V12 is for folks who want something different than the current breed of 125cc economuters. It’s for the cost cautious Indian buyer who wants a value for money product which would stand out from the crowd and demand a second look. It’s got enough power to make your commutes relatively faster. At INR 56,283 (ex-showroom), it does retail slightly higher (Shine~55,700 – drum / Super Splendor ~ 54800- drum) than its rivals but what you do get is a motorcycle that offers the dimensions of a 150cc with the efficiency of a 125cc motor. 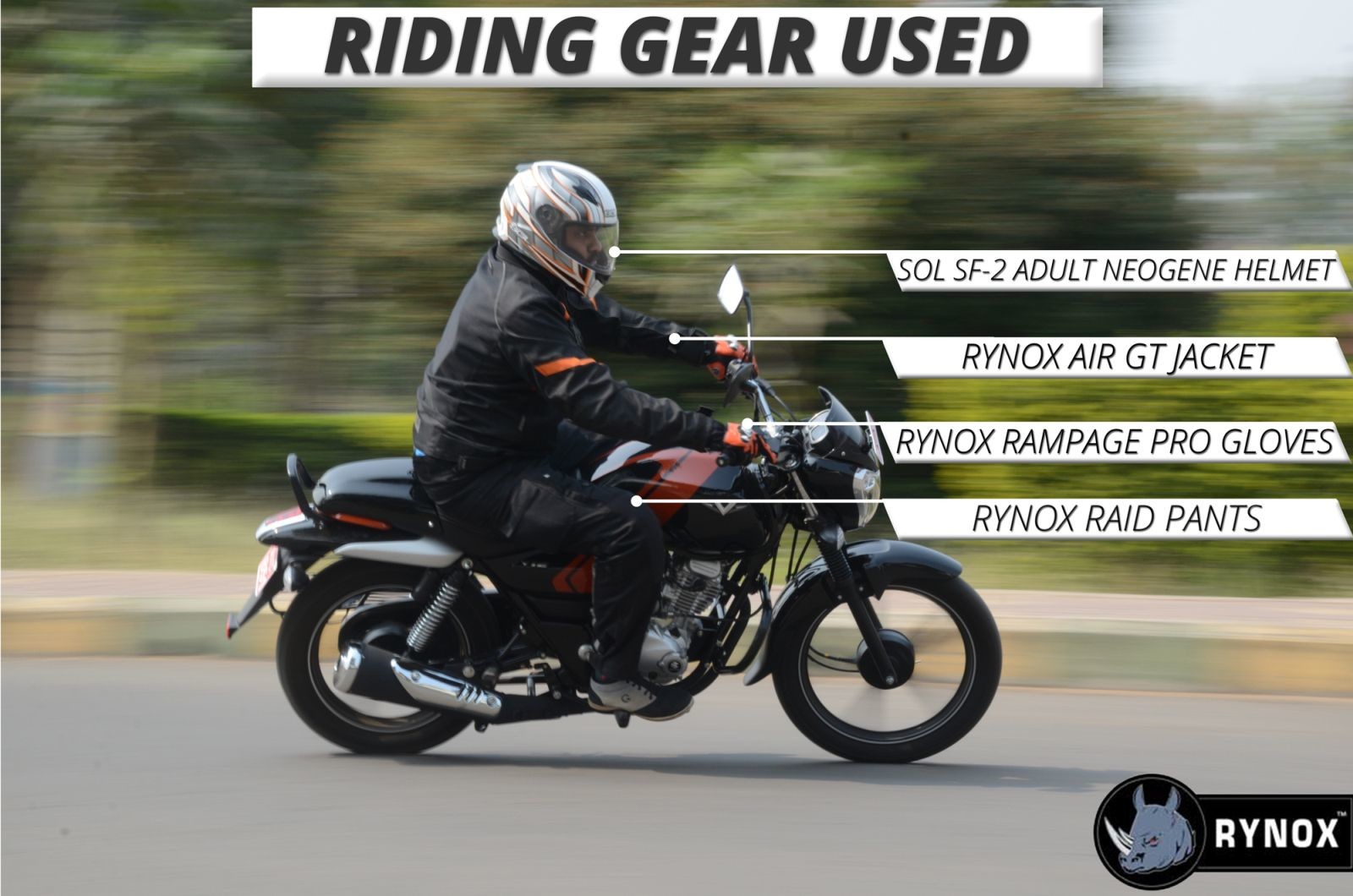 Check out the complete technical specifications of the Bajaj V12 below:

Check out the new Bajaj V12 in the detailed image gallery below: