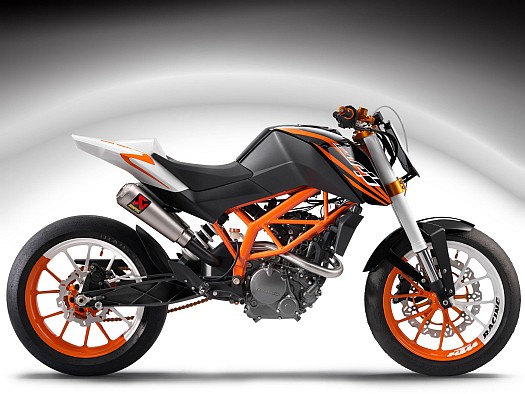 We brought you the news of KTM’s mini Duke for India being a 200 yesterday, and now, thanks to a link shared by one of our Motoreps for the city of Mumbai, Gopinath, we have been able to deconstruct the new KTM bike entirely. Well almost. So here goes.
To start with, much air has been cleared about the engines to be used on the new KTM’s. There is a base 125cc engine, which will be primarily for the European markets as a learner bike. KTM plans to acquire young riders as the biker community is shrinking in developed markets. They want the new KTM to be a ‘cool’ product, acquire willing riders early in their life cycle, and evolve and grow along as they graduate to the next level. This 125c machine will have an engine rev-limited to 10,500 rpm, producing 15PS and peak torque of 12Nm at 8,000 rpm. The same engine will produce a little more power in its delimited 11000 rpm guise. In its derestricted avatar, this 125 would be good for a genuine 120km/h top speed.
That’s for the Euro market. For India, the same 125cc engine will be bored and stroked out to 72 x 49 cc, producing a very impressive 25PS of power. The chassis, silencer, radiator and the rest of the setup will remain the same for the 200cc mill, as the frame is designed to take much higher stress than what a 125cc mill can offer. The chassis has been reported to have been fitted even an existing 250cc KTM engine and it ran without any trouble.  Only the header pipe and probably the throttle body will have to be replaced for installing the bigger engine into the very capable chrome-molybdenum trellis frame.
All the components for the new bike, except for the Jingfi alloy wheels which are sourced from China, and the forged aluminium parts that arrive from Poland, will be made in India. KTm has apparently given Bajaj a lesson or two on quality of materials, and the result will show in the future products from the Indian bike maker. The quality of components for the KTM bikes is said to be of a very high order, and the new engines are designed and engineered to run robustly for years together to instill confidence about the brand in the new customers.
The Euro bike will feature a fuel tank with 11-litre capacity. The fuel efficiency for the 125cc mill is reported to be in the region of 28-35kmpl. The 200, even with its bigger volume should be able to deliver a figure in the region of 30kmpl. An insider tells us that the ‘best’ fuel efficiency for the current test mule is 38kmpl. The tank for the Indian version is said to be slightly bigger.

GO TO NEXT PAGE FOR FEATURES, SPECS AND DETAILS LIST OF THE NEW BAJAJ KTM BIKES