Audi will be taking part in the legendary Pikes hill climb event next year. The German automotive marquee will be attempting the course in an autonomous TTS rally car.

The TTS rally car will have fly-by-wire controls enabling it to be driven without an on-board driver while conforming to the driving style and speeds of professional drivers over a variety of road surfaces. A safety system which will shut down the car upon detecting an accident threat or loss of control situation is also under development. The car has been christened ‘Shelly’ which is the nickname of Michelle Mounton-the first woman driver to win the Pikes Peak event. She had won the event back in 1985 driving an Audi Sport Quattro and is the most successful woman rally car driver till date.

The TTS rally car has been jointly developed by Volkswagen’s electronic research lab, Stanford University and Sun Microsystems. It currently holds the unofficial record for the fastest autonomous car at 130mph!  At the Pikes hill climb event, rally drivers attempt to cover a distance of 12.4 miles which includes 156 turns in the fastest time possible. 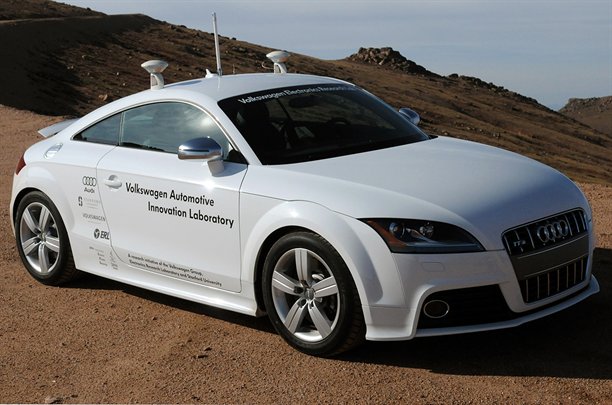