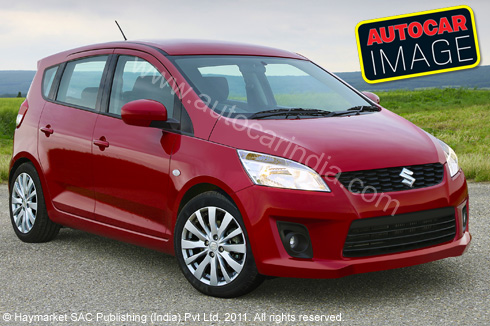 Maruti Suzuki has been the most dominant company in India when it comes to fuel efficient, low maintenance and high resale value volumes segment cars in India. The company is now planning to enter a new segment, dominated by the Innova with their new product – RIII. We have already reported to you the ongoing testing of the car, and have brought to you the images of the same in our two stories here and here.

Now India’s leading car magazine Autocar India has come up with new rendered images of the RIII, illustrating to great details what the MPV would look like when launched. The production version of the RIII should be launched by the end of 2011 or probably you will see it on the stage of the Auto Expo 2012.

First look at the front of the RIII and you will be tricked into thinking it’s the Ritz. It is basically the Ritz platform used and extended to accommodate the extra last row of seats. The wheelbase has gone up to 2740mm which is around 380mm more than the Ritz. Also you will find that the car has quite a bit of rear overhang.

The RIII will not qualify as a small car as it’s length is more than four metres, at 4265mm. The small car excise duty cut will not be applicable for this people- mover. Expected engines are the 1372cc K14 petrol engine which makes a decent 95bhp and then there is the most frugal engine from Fiat the 1.3 VGT from SX4 which makes a perfect 89bhp enough to keep the fuel efficiency high.

Looks like Maruti has got a winner on their hands with third row seats make this car more prone to be bought as Indians love to roam in numbers especially the whole family; fuel efficient tried and tested engine options and finally the Maruti badge which means stress free ownership.