Apart from dozens of unveils and only a handful of launches, the 2016 Auto Expo also allowed its visitors to have an up close look at the MotoGP motorcycles. The second largest motoring show in terms of footfall, the 2016 Auto Expo saw MotoGP motorcycles from Aprilia, Honda, Suzuki and Yamaha. We had our time with our favourite, we made sure not miss out on others too. Here is the list of motorcycles present at the motoring event: 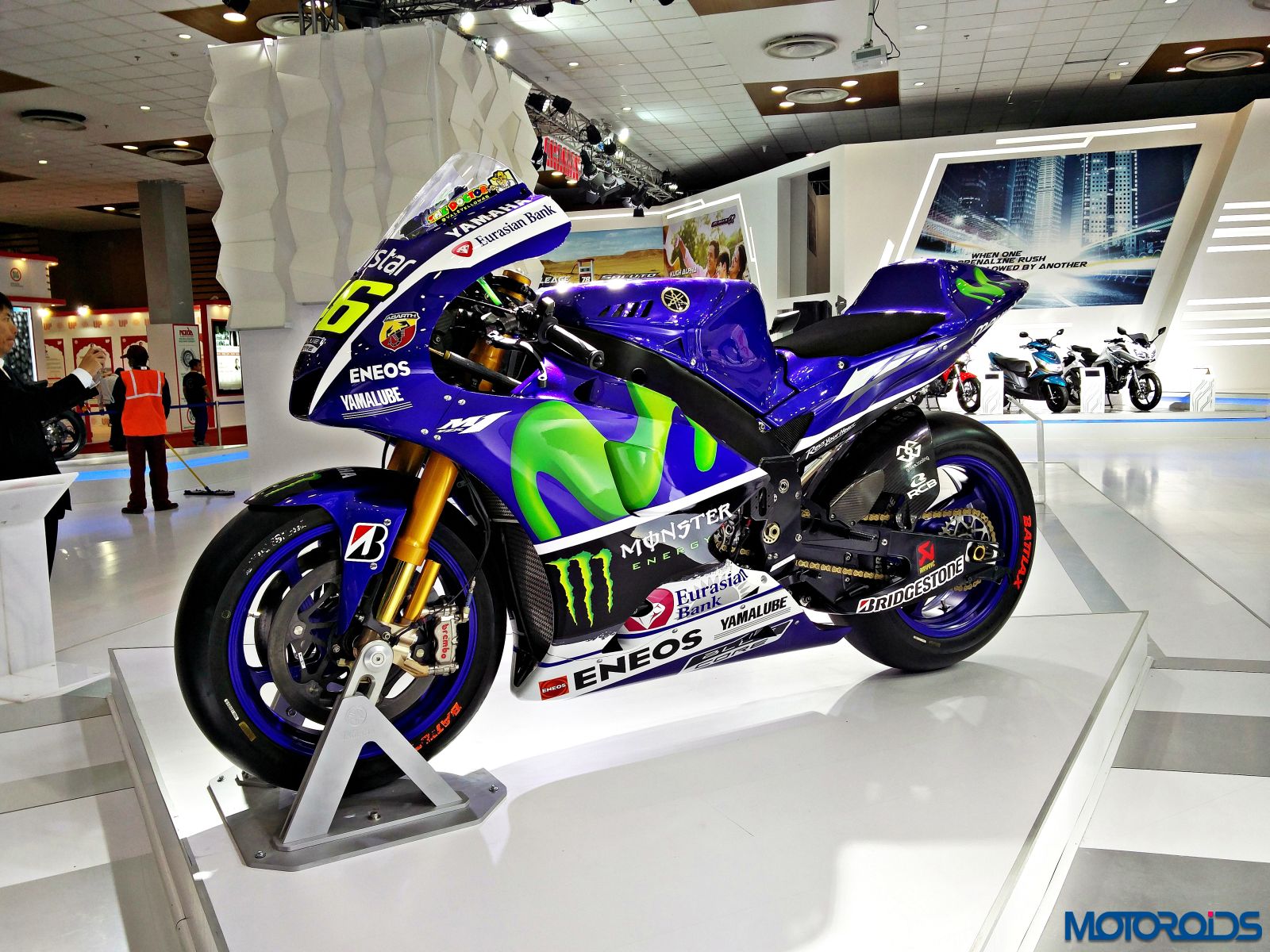 Marked with the number 46, we could not get enough of Valentino Rossi’s 2014 YZR-M1 MotoGP motorcycle. Powered by a litre-class liquid-cooled, in-line, 4-cylinder, 4-stroke with 16-valve DOHC crossplane crankshaft (fires at 180° flat-plane crank) engine, the Movistar Yamaha MotoGP motorcycle puts out over 240 hp of power. The engine comes mated to a six-speed cassette-type gearbox with alternative gear ratios. Even with all the equipment on board, the motorcycle tips the weighing scale at just 157 kilograms. The motorcycle can clock speeds of over 340 kph. 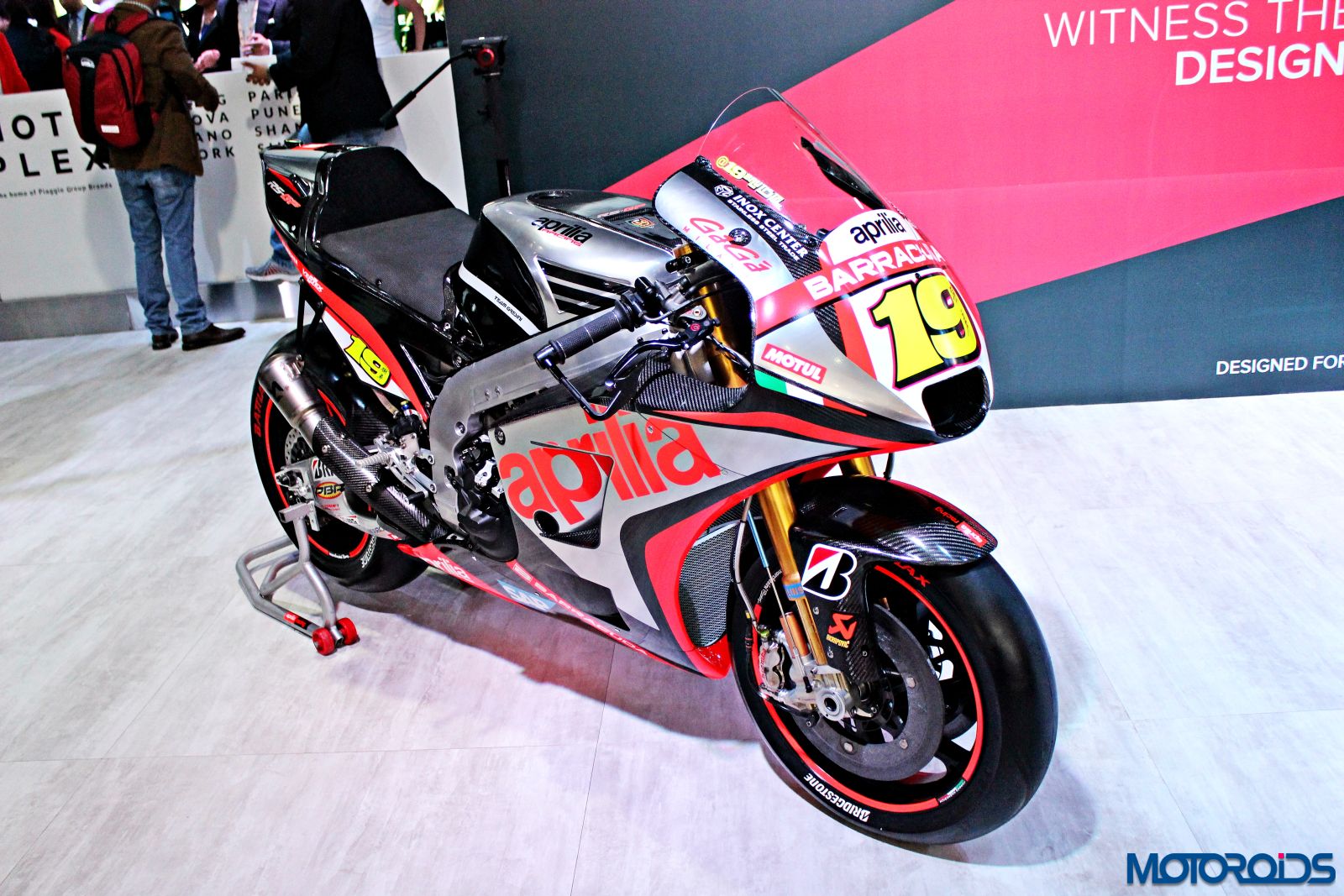 Another MotoGP machine on the block was Alvaro Bautista’s Aprilia RS GP motorcycle. The Italian manufacturer made a comeback to the premier class in 2015 and the team was represented by Alvaro Bautista (Number 19) and Marco Melandri (Number 33). Aprilia will reportedly have an all-new bike for the 2016 season. The 2016 motorcycle will evolve with the learnings from the RS-GP model. The 2002-2004 motorcycle was powered by a 990cc inline three cylinder motor which produced over 235 hp of power. The performance numbers for the 2015 model were not available. 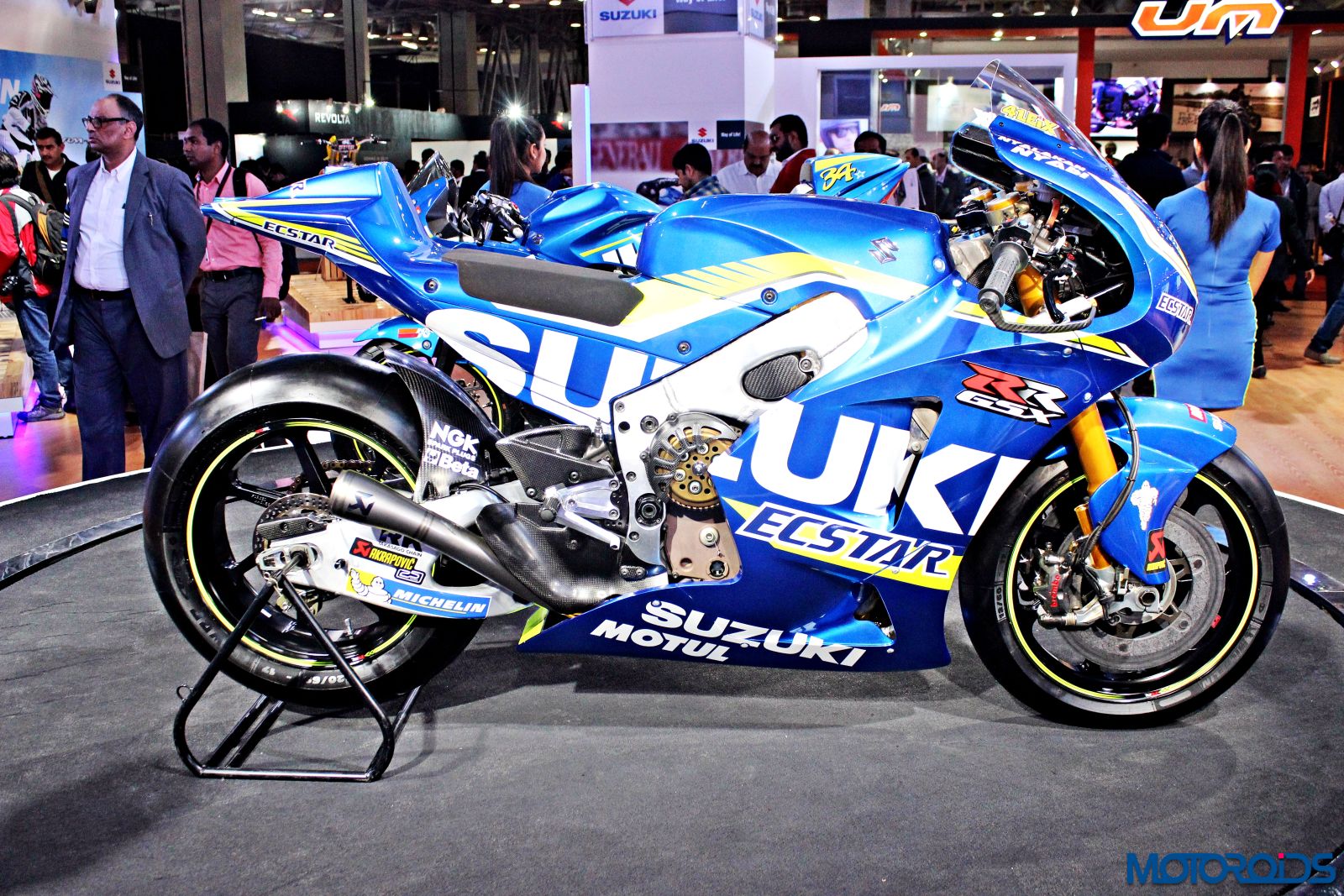 Draped in its trademark blue shade, the the Suzuki ECSTAR GSX-RR welcomed the guests at the 2016 Auto Expo, standing next the Gixxer 155 race edition. The 1000cc liquid-cooled, four-stroke, DOHC 4 valve, inline-four engine produces over 227 hp of power. The number 41 Suzuki ECSTAR GSX-RR was used by MotoGP racer Aleix Espargaró. The motorcycle can reach speeds of over 330 kph. 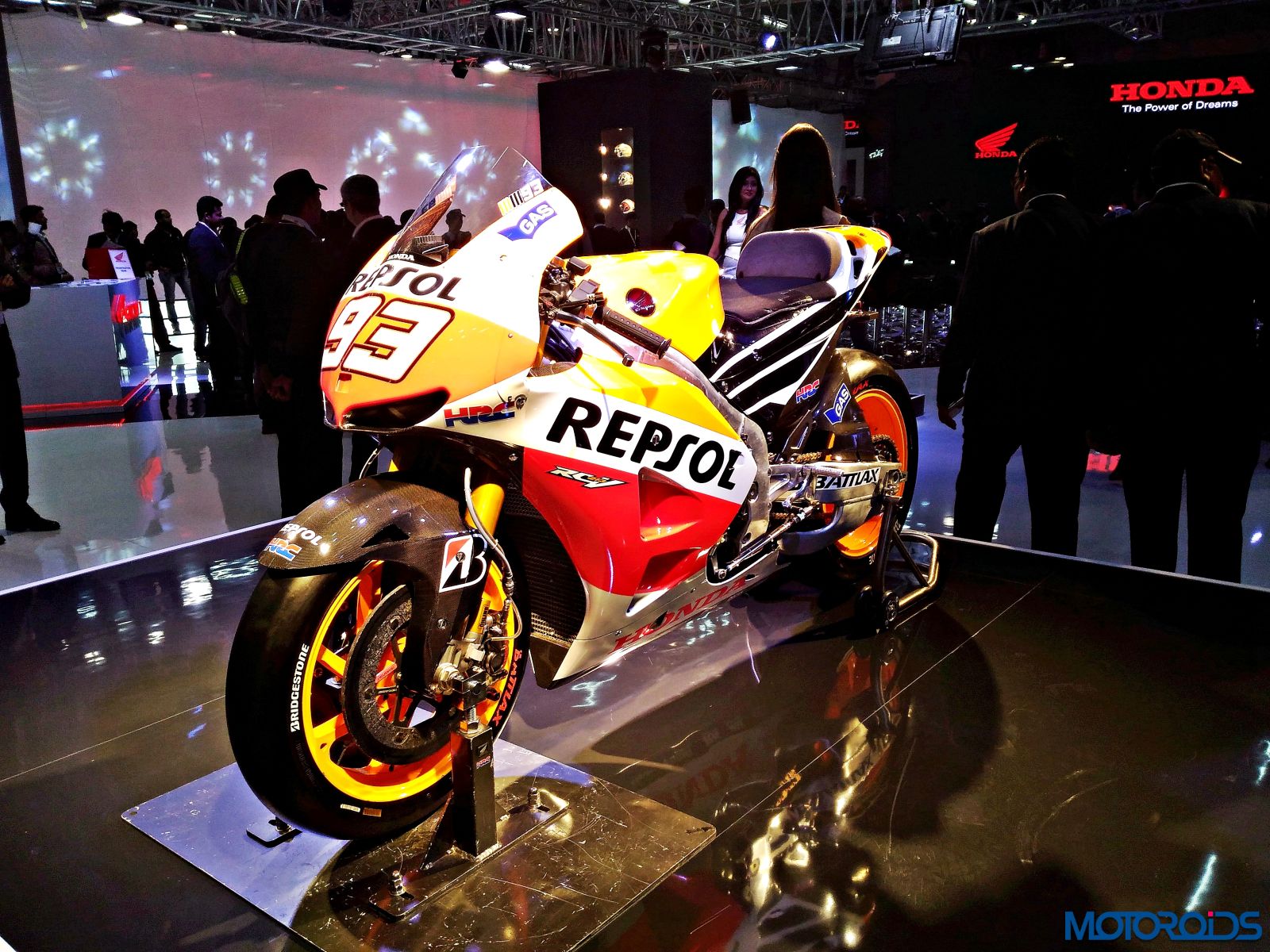 Well, we had our time standing next to our favourite motorcycle. It wasn’t even a contest! 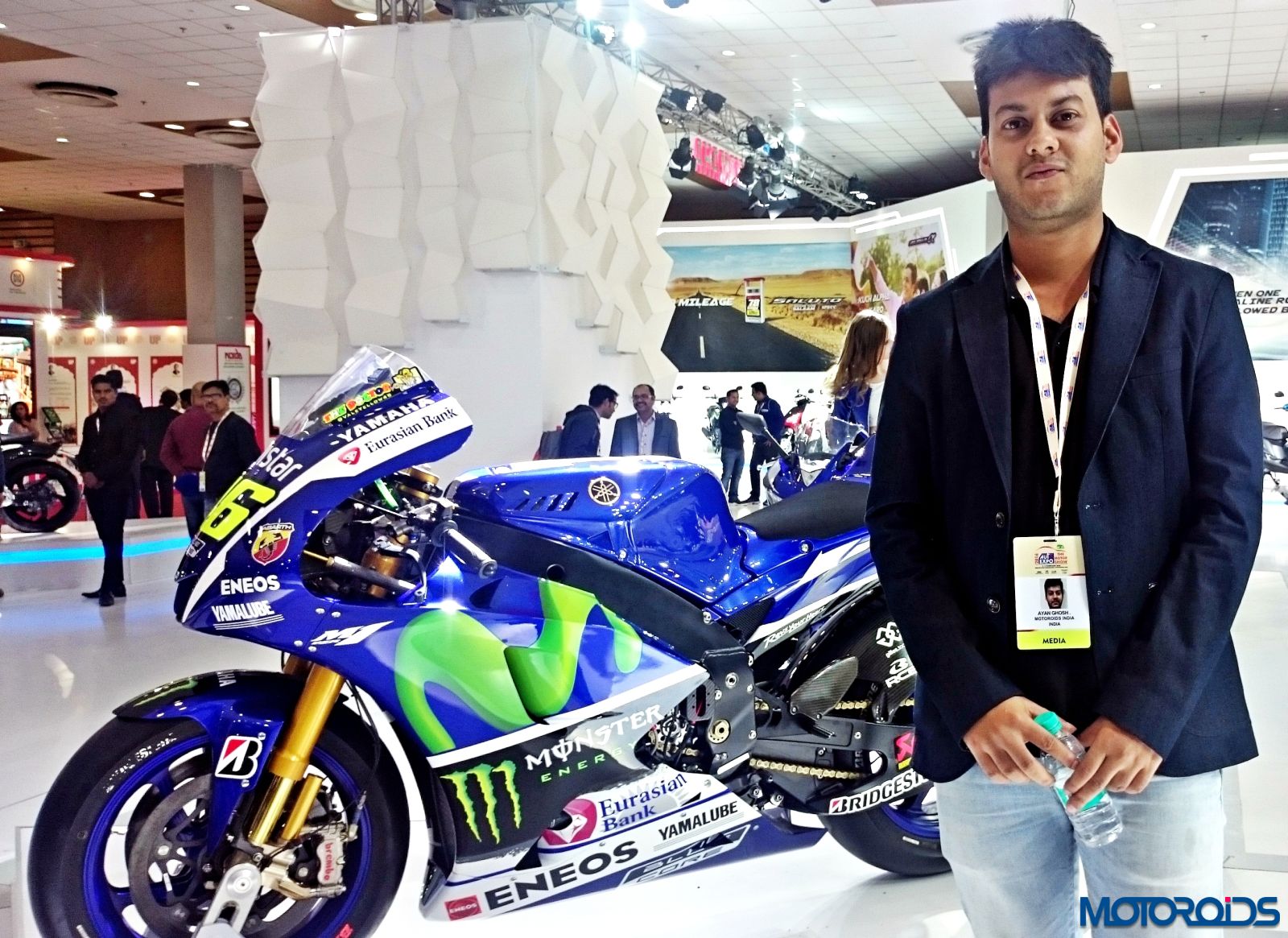 Check out the complete image gallery of the MotoGP motorcycles below: