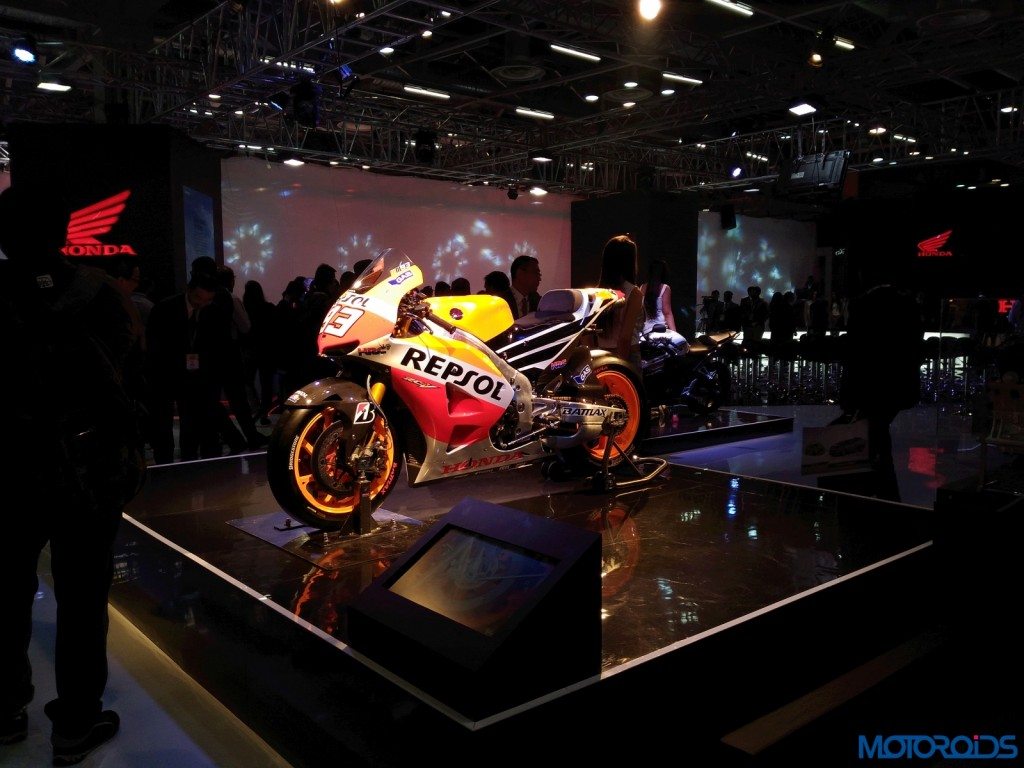 Honda created a good stir by launching their new brand of mini motorcycles called Honda Navi. While the new brand had its own stage to perform on, Honda had showcased each and every product of their India spec line-up and further decorated their pavilion with racer bikes and concepts. One of these machine which particularly garnered a lot of attention was the Honda Fireblade Repsol edition. 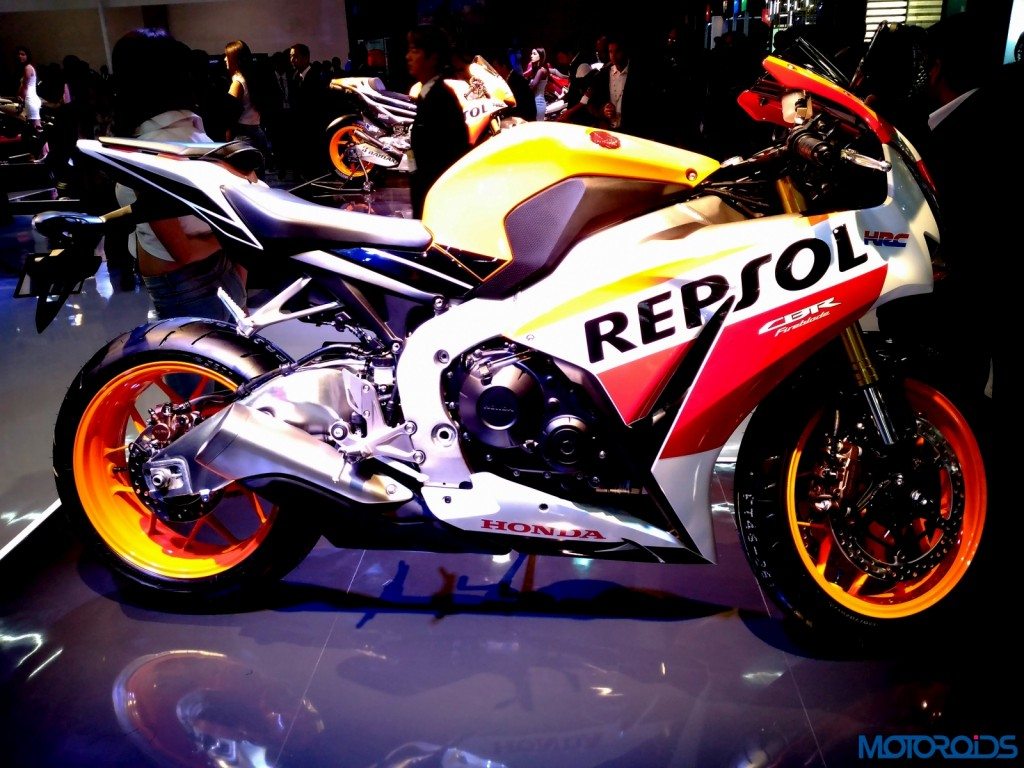 While we were busy photographing and gazing at the bike, another bike in the similar skin made us turn our lenses; it was the official bike of the Repsol Honda Team of the MotoGP World Championship – the Honda RC213V. Recently, the rider of this bike was in no good news but whatever it may be, his ride is pretty cool! 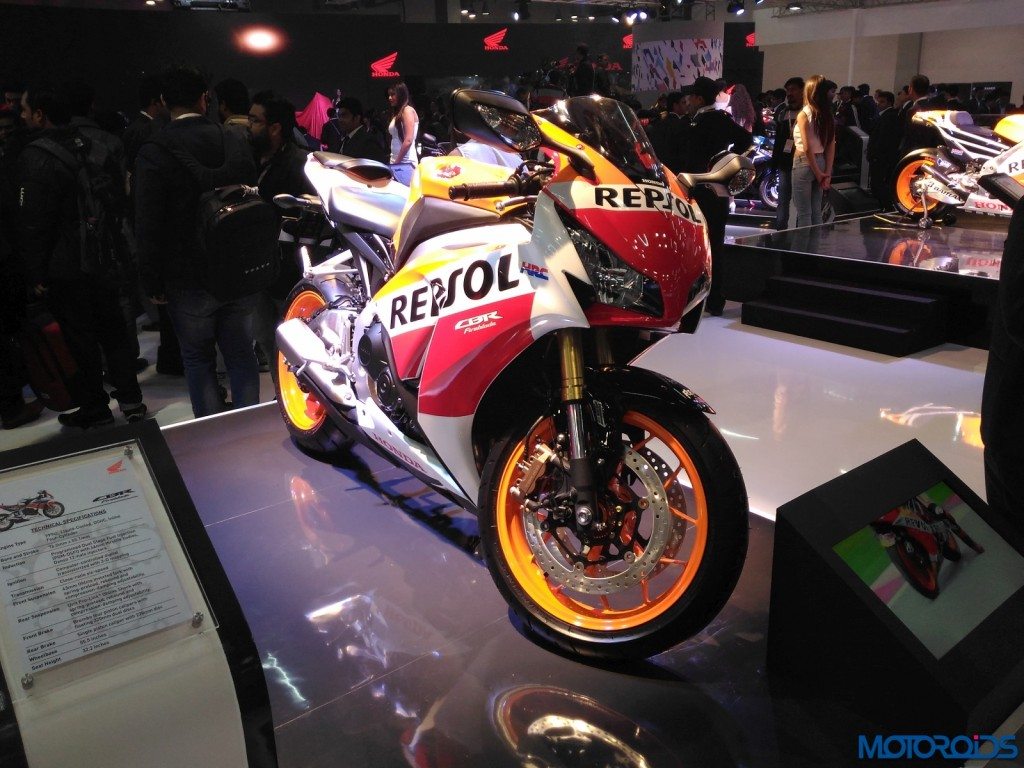 The Fireblade has been into existence since 1992, as the CBR900RR then. It boasted an open class Super Sport motorcycle design and a combination of big-hitting litre-bike power with light, middleweight-size chassis for perky riding experience on open road or closed circuit. Honda introduced the CBR1000RR in 2007 as the 7th gen of the series of motorcycles that began with the CBR900RR. 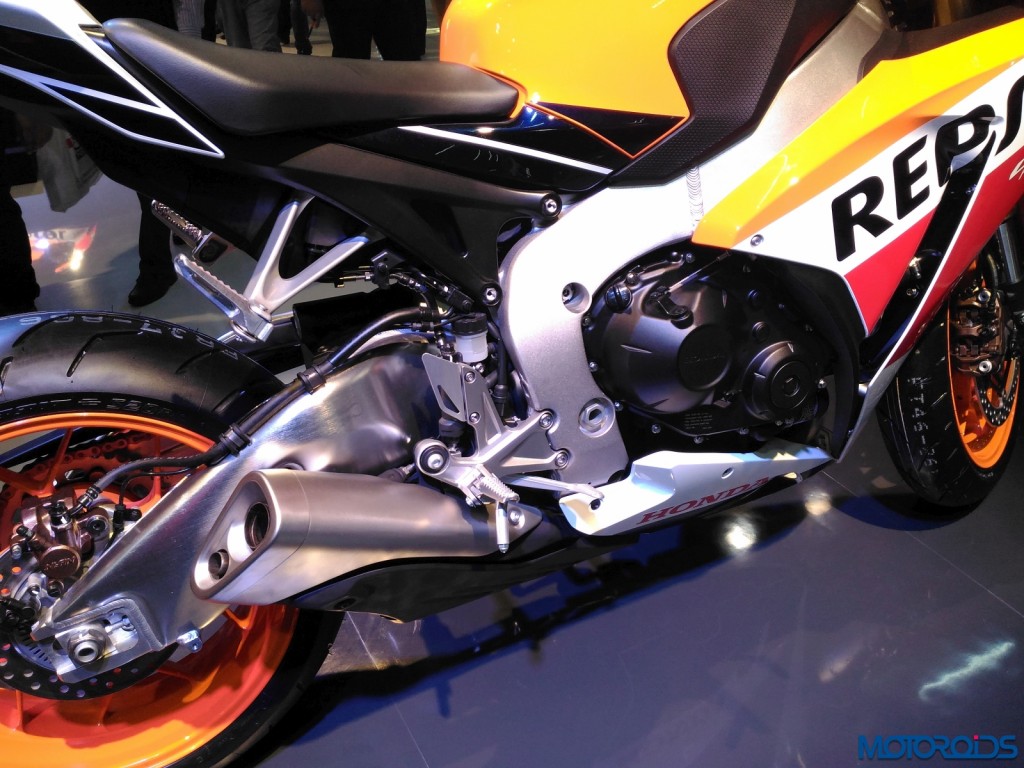 In 2014 the CBR1000RR Fireblade was upgraded to improve its peak power, mid-range torque, riding position and its track-focused twin, CBR1000RR Fireblade SP, got added as a variant. In 2015 the Fireblade received a cosmetic upgrade inspired by 2013 and 2014 MotoGP champion Marc Marquez. It featured a special Repsol #93 replica paint.

Powering the Honda CBR1000RR Fireblade is a 999cc Liquid-cooled 4-stroke 16-valve DOHC inline-4 engine. The engine is capable of producing 176bhp at 12,000rpm and a peak torque of 112Nm at 8,500rpm. The power is pushed to the rear wheel by a 6-speed manual transmission. 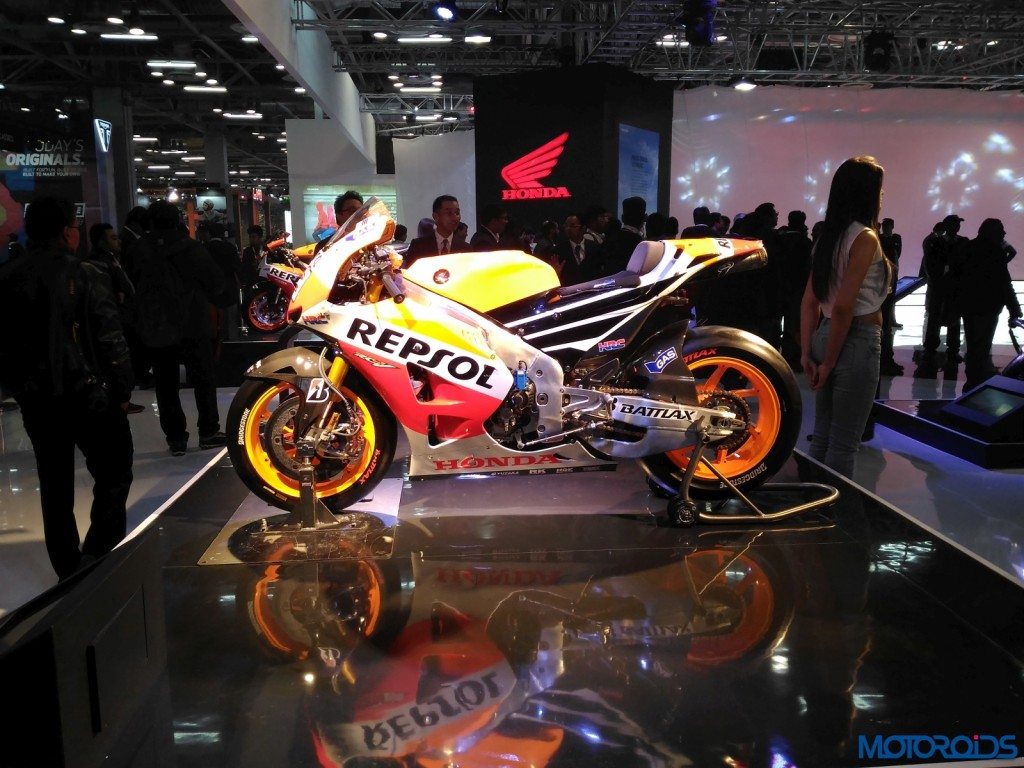 For starters the model name designates the following: 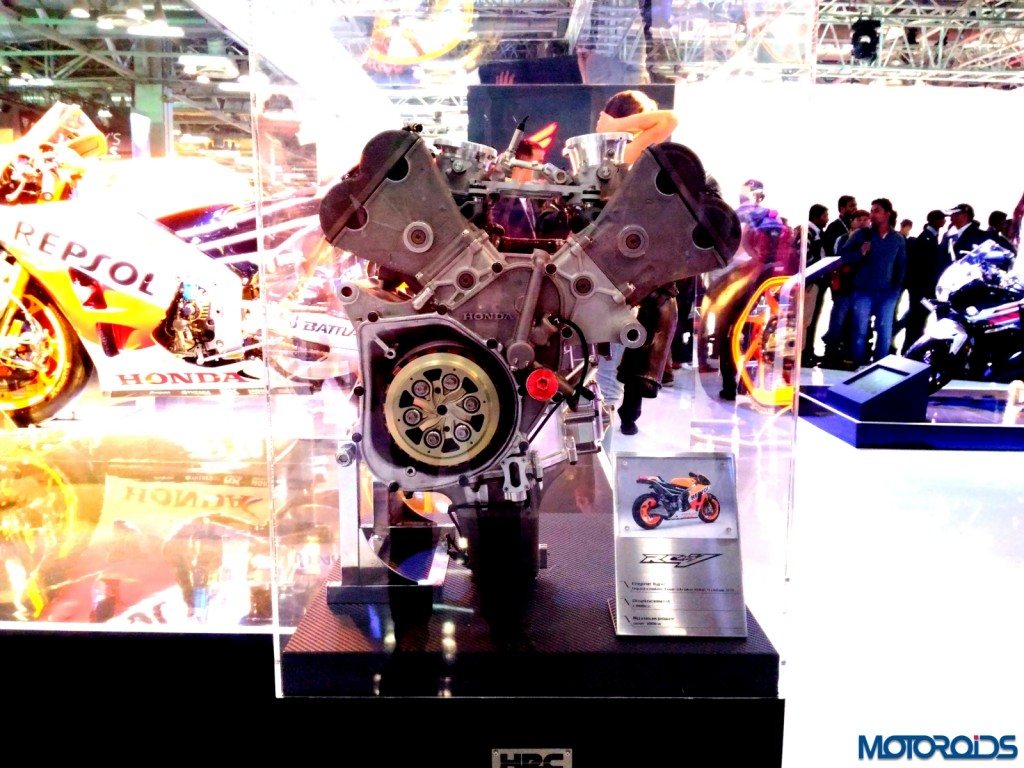 In the V-type engine configuration the cylinders and pistons are aligned, in two separate planes and appear to be in a ‘V’ when viewed along the axis of the crankshaft; like this one! 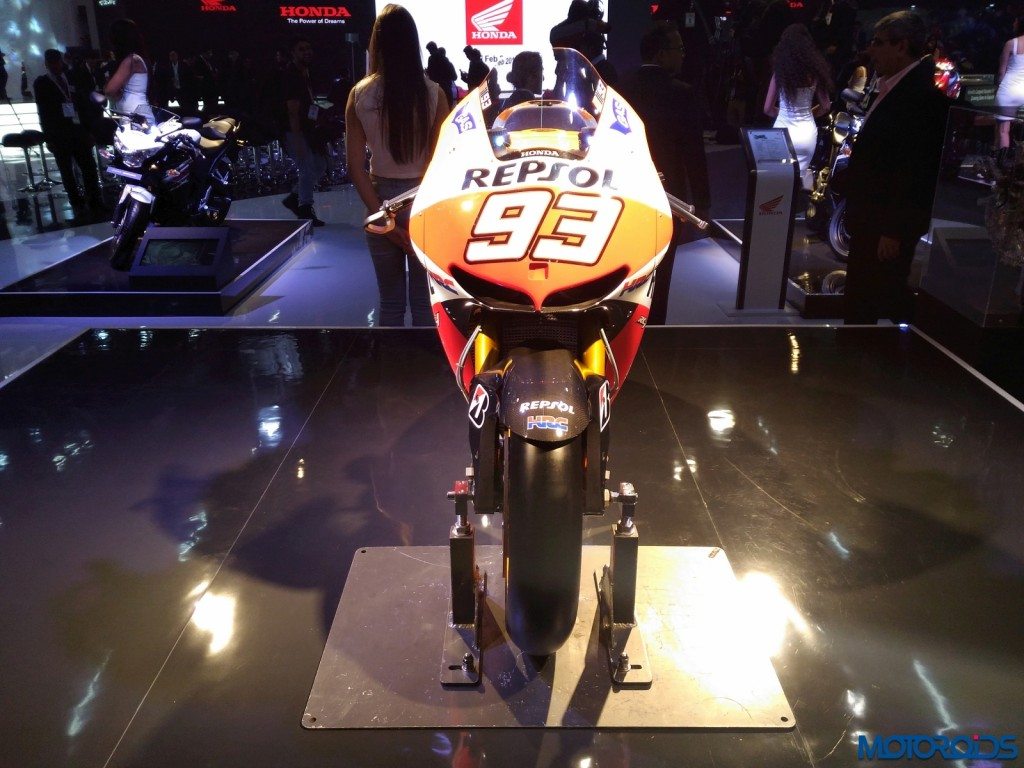 The Honda RC213V is a road racing motorcycle developed by Honda Racing Corporation to race in the MotoGP series for the Repsol Honda Team from the 2012 season. The 2015 RC213V continues to follow Honda’s project of mass centralization that aims to produce a machine with optimized handling characteristics combining stability, agility, resistance to wheelies and maximum cornering grip. 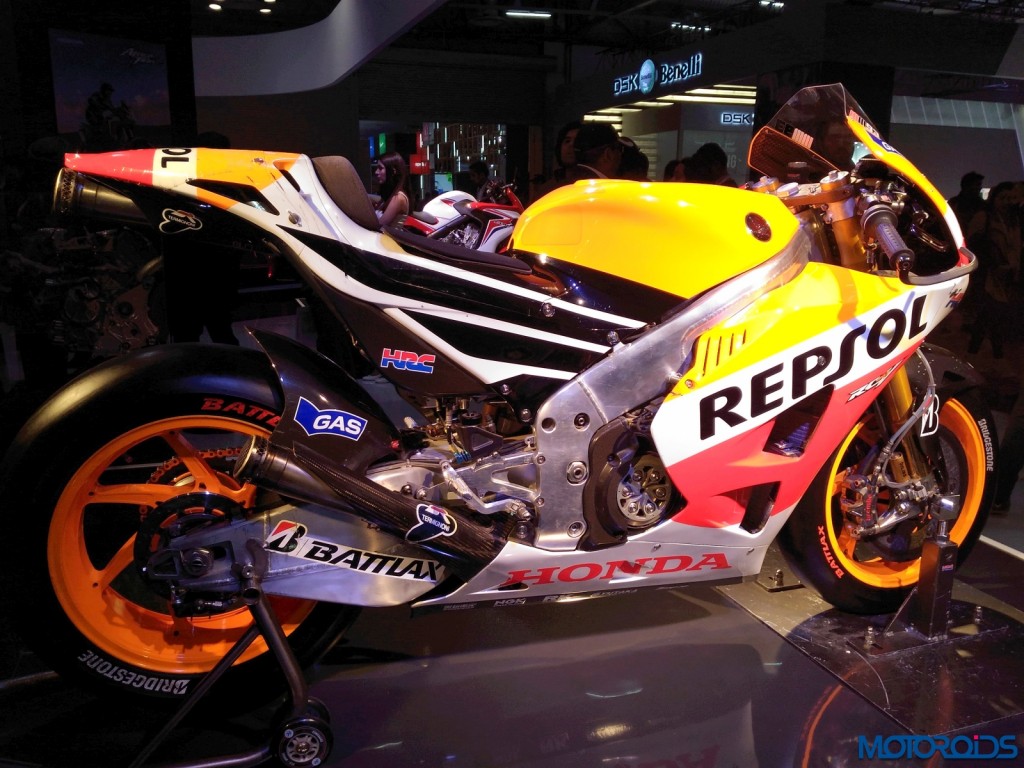 The 2015 edition gets a modified chassis with improved strength characteristics and designed to reach the maximum compatibility between turning and stability. The Honda RC213V draws power from a 1000cc Liquid-cooled, Four-stroke, DOHC 4 Valve, V-4 engine that generates power over 230 hp.

Here is the image gallery of the Honda RC213V and Fireblade Repsol edition showcased at the Auto Expo. Have a look.