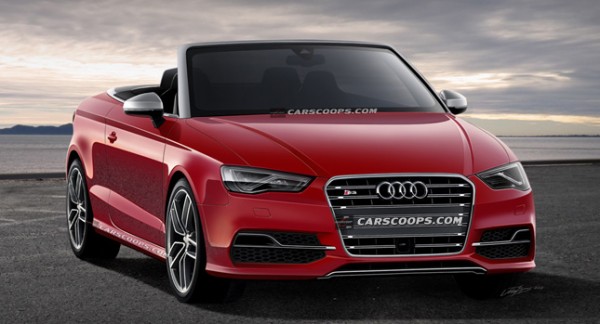 The Audi S3 sedan hasn’t yet made it to the car markets and the convertible model of the sporty Audi has already come into light. The S3 Convertible hasn’t been officially unveiled but what we have here today is an illustration from the good folks at Carscoop.

The Audi S3 Convertible would look much like the four door hard top variant, of course, it with the two doors and the fixed roof shown the door. The car will continue to sport the distinctively Audi-sh single-frame grille and full LED headlights. In tradition Audi S series car fashion, the S3 cabriolet will sport aluminium finish on ORVMs and aluminium garnishing on windscreen frame.

The interiors will come clad in rich leather and will borrow the panels from the sedan variant. The car is expected to be pretty loaded with equipment such as a Bang & Olufsen In Car Entertainment system, adaptive cruise control, lane assist, automated park assist and an Audi MMI system with a 7 inch screen.

Powering the S3 Cabrio will be a 2.0-litre, turbocharged engine that will have 300PS of peak power and will come mated to a S-Tronic auto ‘box. All the power will be transmitted to all four wheels via Audi’s Quattro all-wheel drive system. The car would hit 100kmph in 6 seconds

The Audi Drive Select system will allow the driver to select between various setting, along with offering the option of having a customized setting.

Audi India, the Indian subsidiary of the popular German premium car maker, should be applauded for being quick in launching its performance oriented cars in India. Hence, don’t be too surprised if the S3 Cabrio makes it to us soon after its international debut.