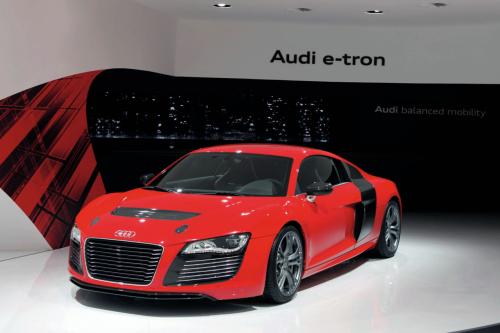 The 64th International Frankfurt Motor Show is all set to begin tomorrow (September 13th, 2011). On the eve of the motor show, Audi has revealed its R8 e-Tron prototype. This electric machine is set to be launched by late 2012. The car is differentiated by the current R8 by a ventilated hood, a revised grille and additional carbon fiber accents.

The electric vehicle from Audi’s stable will compete with the Mercedes SLS AMG E-cell and will come with a 53 kWh battery that will power four electric motors powerful enough to produce 313 PS (230 kW /308 hp) and 4,500 Nm (3,319 lb-ft) of torque. The R8 e-Tron takes almost 4.8 seconds to touch the 100 kmph mark from stand-still and can travel a total of about 250 km on a single charge.  The battery can be recharged in six to eight hours with a standard household outlet or two and a half hours with a rapid charger.