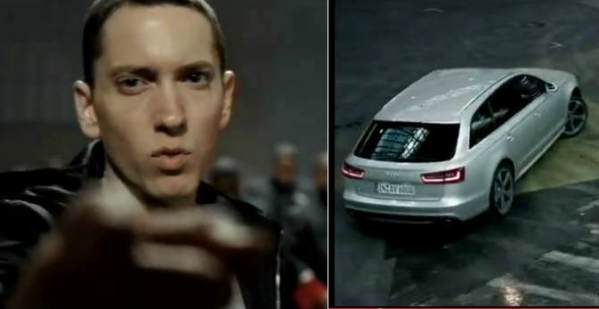 Audi is known to be a company which makes its ad agencies produce good quality ads for the brand, if not the best. Now, the latest German ad for the A6 Avant released by the Ingolstadt based premium carmaker doesn’t quite seem to follow the tradition. First, no matter how much the company may want to deny it, the background score’s resemblance of Eminem’s Lose Yourself is way too evident. So Eight Mile Style, Eminem’s song licensing company is suing the German carmaker for using an interpretation of the original song.

Incidentally Eminem endorsed the Chrysler 200 in an earlier Superbowl ad which was a great hit with the Americans. With ‘This is Motor Town, and this is what we do’ punch line, the ad impressed on what the Chrysler brand stood for. Of course it used Eminem’s Lose Yourself track as the background score. Seems like Audi’s ad agency got a tad too inspired by the ad. We’re also quite sure that the agency is the line of fire originating from Audi HQ’s at the moment, unless of course, they were briefed to do what they did.

Have a look at the two ads, and let us know what you think.