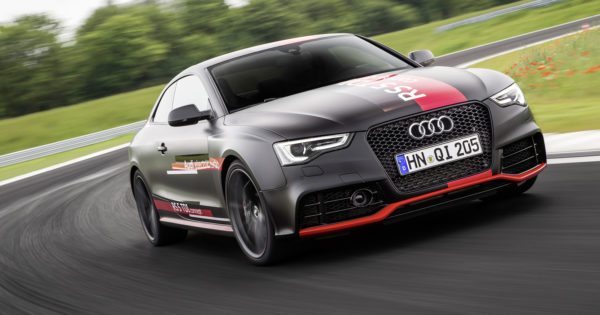 As more and more computing goes into cars to make them capable, electrical demands rise and the standard 12-volt systems just don’t cut it anymore.  Audi shares the same sentiment and mulls replacing them with 48-volt units allowing it to integrate new technologies and increase the power and efficiency of its cars. The recent RS5 TDI and A6 TDI Concepts feature a similar setup since these cars employ innovative electric turbo charging technologies. To counter turbo lag, there’s a new electrically operated compressor which acts like a supercharger- it starts spinning at just above zero rpm, providing boost even at lowly engine speeds. The compressor doesn’t rely on the engine to perform, but gets juice from a standalone electrical system which allows for improved performance and acceleration- that’s where the high capacity 48 volt system makes its presence felt. 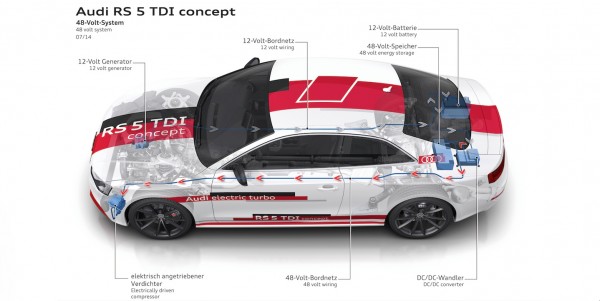 As the above graphic shows, a compact lithium-ion battery, working in collaboration with a new efficiency-optimized alternator supplies 48 volts during the engine-off phases and a DC/DC converter integrates the conventional 12-volt electrical system. All that paraphernalia combined together makes for a mild-hybrid system. The powerful alternator achieves an energy recovery output of 10kw – significantly more than current systems – and translates to a saving of 10 grams of CO2 per kilometer, which is equivalent to about 0.4 liters of fuel per 100km. Audi says that the new technology could be entered production in 2015, and the next generation Q7 could benefit from one, amongst others in the Audi line-up eventually.