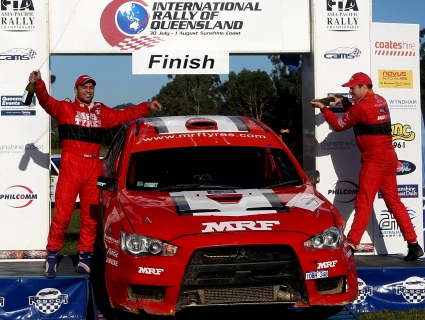 Round 4 of the 2010 FIA Asia Pacific Rally Championship was yet again, very fruitful for Team MRF. Ace Indian rally driver, Gaurav Gill, displayed his talent as he drove to a blistering win in the forests of Sunshine Coast with continual support from his co-driver Glen Macneall. Their teammate, Katsuhiko Taguchi, too impressed with a third place finish in his Mitsubishi Lancer. Gaurav Gill and New Zealander Glen Macneall could manage only one victory in the 18 special stages of the Australian round but where consistently finishing in the top three. It was this consistent performance that won them the top spot of the podium. Interestingly, the top two spots of the 2010 APRC are still with Team MRF but with this win, Gaurav Gill has closed the gap to championship leader and teammate, Taguchi, to a mere three points!

While addressing the media after the prize distribution, Gaurav Gill jokingly commented, “It’s been a great weekend although not very clean. We’ve got some dents in the panels and I don’t even know how I got them; there’s some invisible trees I think out there. He added, “Glen’s been a great partner. He’s been co-driving with me for more than a year now, we make up a good team and he’s been helping me go fast. “The team’s done a brilliant job this weekend. We got everything set up for the wet but we didn’t have a lot of sun this weekend then finally it stayed up to it’s name the Sunshine Coast.” After heavy rain on the stages during the week, conditions dried for the weekend and were mostly hard and fast.

Click on the image for a High Resolution view